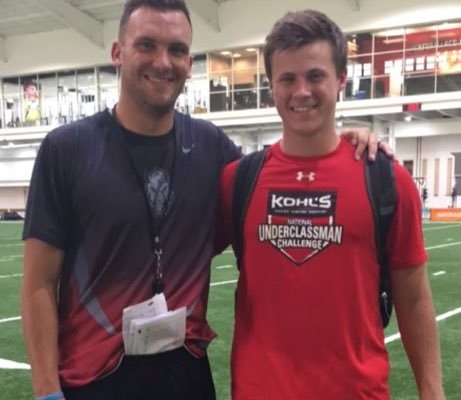 Punter Reid Bauer’s patience paid off when he learned he had a preferred walk-on offer from Arkansas after talking to Tanner Burns, who has been retained to work with the special teams.

“Me and Coach Burns have stayed in contact ever since I’ve met him,” Bauer said. “He’s always said be patient and it will come. And today we were texting and talking about when it would come, and he said he was going to talk to the staff to get it finalized. And then he gave me a call and said it came through.”

Bauer, 5-11, 190 pounds of Magnolia, Texas, averaged 41.3 yards on 27 punts, placing 11 inside the 20-yard line while having a long of 62 yards. He attended Arkansas’ specialists camp last summer along with the New Mexico State and Auburn games in the fall.

He was thrilled to hear the news from Burns.

“It was so surreal,” Bauer said. “It’s what I’ve been working so hard for. The offer is great, but now it gives me even more motivation to work to contribute to the team. My level of interest has stayed the same. I’ve been on plenty of visits and have nothing but good things to say about the school and program.”

The Houston Chronicle named Bauer All-Greater Houston second team punter. A preferred walk-on is allowed to be a part of the 105 that reports to fall practice.

In addition to the Razorbacks, Bauer is also drawing interest from Michigan and Texas State.

“Coach Burns worked his tail off to get me the preferred walk-on offer,” Bauer said. “I have the utmost respect for him.”

“Arkansas is such a pretty state and reminds me a lot of home,” Bauer said. “I think they have great traditions and also a great football program that’s rich in history.”

Bauer will play in the Blue-Grey All American game Saturday in Jacksonville, Fla. Kohl’s Kicking rates Bauer a 5-star prospect and the No. 14 punter in the nation. He will take time in making a decision.

“I’m not going to rush anything,” he said. “I still want a chance to visit the campus one more time and get a chance to meet the new staff.”