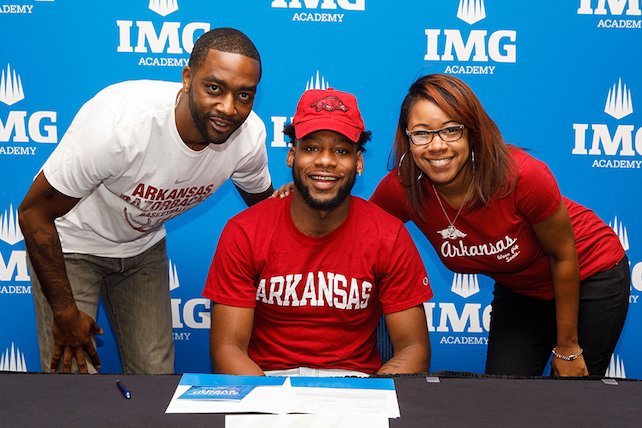 FAYETTEVILLE -- Over the weekend, two future Arkansas Razorbacks got a chance to mix it up in West Virginia in a game that was probably well-watched in Arkansas via computers and smart TVs on the WatchESPN app.

I was certainly one of those who watched games from the Cancer Research Classic in Wheeling, W.V., and was reminded once again of the talent coming into the Razorbacks' men's basketball program.

Chaney, whose 19-2 team is ranked No. 9 nationally by USA Today, had 17 points and nine rebounds in the Pilots' 93-79 win while showing off his rebounding aggressiveness and his penchant for running the floor. He reminds me of former Arkansas standout Derek Hood, who shined for the Razorbacks from 1995-99, and sounds like it when he describes his game.

"I think my strongest part is how I attack the ball and just go get it," Chaney said after the game. "I am a good shooter and can play well inside the post and out, but going to the glass and the rim are probably my best things.

"I'd say the biggest thing I need to work on now is my perimeter game. I want to get a better jumper."

Chaney, who is averaging 14 points and 8 rebounds per game, likes what he sees out of Embery, the former Midwest City, Okla., star who has only played four games so far this season due to an injury.

Embery will draw comparisons to another former Oklahoman-turned-Razorback in Clint McDaniel. Embery had 8 points in the contest, knocking down a pair of 3-pointers as he continues to play limited minutes as he comes back from the injury.

"He is a tough guy, really tough, and can really shoot the ball," Chaney said. "He is just getting a chance to start playing and you can see what type of player he is going to be. He is going to make (IMG) even tougher.

"I think his style is going to fit right in at Arkansas."

Both of those 7-3 players take and make 3-pointers with Vanover knocking down a trio late in the third quarter. Vanover scored 11 points.

"It's great to be a program where you have so much size and guys that can do so many things," Chaney said. "It allows you to just go do your thing. People have to focus on Bol and that gives the rest of us so much opportunity."

The win evened the series between the two programs this year at one each as IMG, who had Kansas early enrollee Silvio De Sousa (6-9, 240) on its roster at the time, downed Findlay by 13 points earlier this season.

"We played pretty good in this tournament," Chaney said of his team's two wins in as many games. "We had to bounce back from last time when we lost to IMG. That was one of our losses so it was kind of personal going into it.

"I think we have a good shot at the national championships because we have all the right pieces."