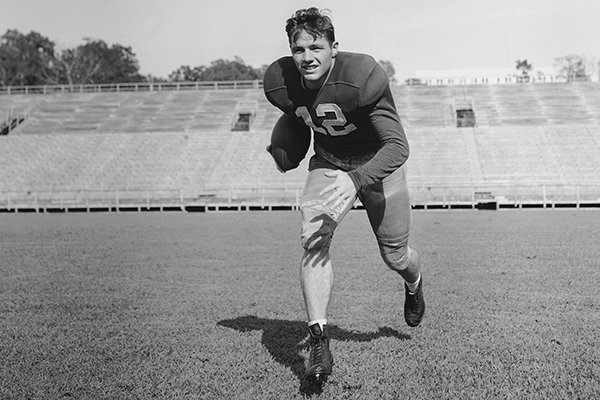 Clyde Scott is shown during a photo shoot in Fayetteville on Sept. 21, 1948. (AP Photo)

FAYETTEVILLE -- Clyde "Smackover" Scott, a two-sport star and All-American for the Arkansas Razorbacks and an Olympic silver medalist in 1948, passed away at his home in Little Rock on Tuesday.

Bio Silver medalist in the 110-yard high hurdles at the 1948 Summer Olympics in London. … All-American tailback for the University of Arkansas in 1948. … Inducted into the Arkansas Sports Hall of Fame in 1963. … Inducted into the inaugural UA Hall of Honor class of 1988. … Had jersey No. 12 retired, the first in Arkansas football history.

Scott's No. 12 is one of only two football jerseys retired by the University of Arkansas, Fayetteville, and it was the only one retied for a living former Razorback. He was inducted into the inaugural UA Hall of Honor class in 1988 with Frank Broyles, John McDonnell, Sidney Moncrief, Lance Alworth and Glen Rose.

"People talk about who was the best athlete in Arkansas. Well, I argue that he's the best athlete who ever lived," said Bud Whetstone, a Little Rock lawyer and longtime friend of Scott. "The outstanding thing about Scotty is he was more in the category of Jim Thorpe. There wasn't anything he couldn't do. Whatever he tried he was the best at it, or one of the best."

Scott had been in hospice for a few days but passed away at his home, a friend of the family said.

Scott earned his nickname "Smackover" because the town in Union County in the southern part of the state was his hometown after his family moved from Dixie, La.

After graduating from Smackover High School, Scott attended the Naval Academy and played football there in 1944 and 1945. He transferred to Arkansas in the summer of 1946 so he could marry his girlfriend, Leslie Hampton of Lake Village, Miss Arkansas 1945. The couple would have two children, Marsha and Steve.

Scott told the Arkansas Democrat in 1982 that he started working on gaining admission to the Naval Academy while in the ninth grade.

"Back then it was something real great, certainly for a kid from Smackover," he said prior to the first football game between Arkansas and Navy. "The Naval Academy was something super and very glamorous at the time. It was truly, truly a great place."

Scott's sense of humor was evident in a Western Union telegram he sent to his wife on June 26, 1946, which is preserved at the UA's Pryor Center for Arkansas Oral and Visual History.

"My surprise attack found the opposition off guard," he wrote. "I submitted my resignation without firing a shot. Expect a counter attack tomorrow. Will let you know the outcome. Love, Scotty."

Scott's modesty about his athletic accomplishments is noteworthy.

"He was a quiet, humble man," former UA sports information director Rick Schaeffer said. "The last person he wanted to talk about was himself. He was a remarkable guy."

Wally Hall, Arkansas Democrat-Gazette sports editor and president of the Arkansas Sports Hall of Fame from 2014-2015, met Scott during functions for the hall, which inducted Scott in 1963.

"He was a true Southern gentleman," Hall said. "If every other athlete was like him, the world would be a better place."

Whetstone said he was 6 years old when he met Scott in 1948. Scott signed his helmet and wrote him a letter.

"There wasn't anybody in Arkansas who didn't know who he was," Whetstone said. "He was everybody's hero. He was such an outstanding athlete.

"There's a certain burden that comes with fame but that never affected him. He understood that he was Clyde Scott but he would never say that to anybody."

Scott played tailback for three seasons at Arkansas and earned All-America status in 1948 when he rushed for 670 yards on 95 carries for 7.0 yards per attempt. He won the silver medal in the 110-yard high hurdles at the London Olympics, losing in a photo finish to USA teammate Bill Porter of Northwestern.

"I thought I'd won the doggone thing," Scott told the Arkansas Democrat in 1982. "It took them a long time to decide."

Scott won the high hurdles at the NCAA Outdoor championships in 1948 to become Arkansas' first individual NCAA champion. That same season, the only year he committed to track-and-field pursuits, he won the 100-yard dash, the high hurdles and the low hurdles; finished third in the javelin; and ran a leg on the third-place 440 relay team at the Southwest Conference championships. The feat would equal 42 points by today's scoring rules.

Whetstone said Scott never had a coach for track and field in high school or college.

Scott also played safety for the Razorbacks and was credited with making a touchdown-saving tackle on LSU quarterback Y. A. Tittle at the 1 to preserve a 0-0 tie in the 1947 Cotton Bowl on the day after an ice storm struck Dallas.

"Interesting in this day when you've got to have speed, speed, speed, in that era, there wasn't much of it and he had more than anybody," Schaeffer said. "A running back running a 4.5 in the 40 was not common then. He was way ahead of his time."

Scott played four NFL seasons with the Philadelphia Eagles and Detroit Lions, winning NFL championships with the Eagles in his rookie year of 1949 and with the Lions in 1952. Injuries to his ankle, knee and shoulder sidelined his professional career.

"His major regret was that he was hurt all of his life," said Whetstone, who added that Scott told him his best sport was probably baseball. "He played with a brace they made for him at Navy. When he ran track, sometimes he was hurt so bad he had to use the alternate leg."

Whetstone said Scott was in line to join pole vaulter Bob Richards to become the first athletes pictured on the front of a Wheaties box in 1958.

"This guy comes by to pick him up in a car in Lake Village but he had the flu and couldn't go to the photo shoot," Whetstone said. "He was supposed to be on the front of the box with Bob Richards or alternating or something. They hadn't worked it out yet."

Wheaties began putting athletes on their boxes in 1934, debuting with Lou Gehrig, but they had always been on the side or back until Richards.

Scott had his No. 12 jersey retired to become the first Arkansas football player to earn that distinction. However, when the Razorbacks were recruiting star place kicker Steve Little out of Shawnee Mission, Kan., in the 1970s and Little wanted that jersey number, Scott agreed to let the number be worn for four more years.

After retiring from the NFL, Scott went on to become an executive in the insurance business and never moved away from Arkansas again.