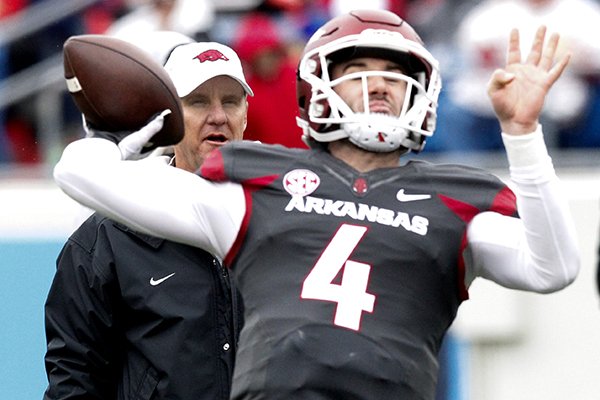 Those few words summarize the preseason perception of Chad Morris’ first Arkansas team — better than Vanderbilt in the SEC, but inferior to Alabama and Auburn in the West, with an abundance of room in between.

Part of the personal dilemma comes from the discrepancy between the “left lane … hammer down” offense touted by Morris and the product on display in the Red-White game.

Influenced by Morris’ reputation and his promise to pursue the record for number of plays in a spring game, a snap every few seconds was anticipated.

Didn’t happen. Often, quarterbacks Ty Storey and Cole Kelley spent too long looking to the sideline and repositioning a teammate.

More than once, SEC Network showed Morris signaling to the offense to speed up. At halftime, he said, “We’ve got to play faster. It has to be faster.”

It was reassuring to hear the man in charge confirm the pace of play was disappointing and to read that offensive coordinator Joe Craddock offered a similar assessment.

Also in play in this long-range prediction is the personnel puzzle — who will start, particularly at quarterback, and what will they be asked to do?

The assumption is that by the end of August, the No. 1s will be more confident and, therefore, moving faster when the Razorbacks open the season and that the secondary will be improved with both Ryan Pulley and Kevin Richardson.

Normally, picking the season would include a look at Arkansas’ opponent from a Power Five conference and assume a 3-0 record vs. the other non-conference foes. Not this time.

First, Arkansas was left without an opponent from a Power Five conference when Michigan backed out of a two-game series. Second, both Colorado State and North Texas could be troublesome.

The preamble complete, time to dive in:

Sept. 8, at Colorado State: Even a so-so SEC team is supposed to have more athletes than a bowl team from the Mountain West Conference, but there will be the nuances of a first road trip together for the coaches and their athletes. Plus, Colorado State split with Pac-12 opponents Oregon State and Colorado in 2017. ARKANSAS 34, COLORADO STATE 21

Sept. 15, North Texas: In his third year, Seth Littrell has the Mean Green headed in the right direction. The year before he arrived, North Texas was 1-11. Under him, North Texas has been 5-8 and 9-5, including a division championship. By the third game of the year, Arkansas players should be reacting without thinking. ARKANSAS 42, NORTH TEXAS 20

Sept. 22, at Auburn: Morris’ introduction to the SEC is liable to be a shock. Returning quarterback Jarrett Stidham was 37-of-51 as the Tigers defeated Georgia and Alabama when both were No. 1. In its second year under coordinator Kevin Steele, the Auburn defense was 12th in scoring defense and 14th in total defense, and some Auburn players are talking about loftier accomplishments in 2018. AUBURN 27, ARKANSAS 14

Sept. 29, Texas A&M in Arlington, Texas: Call me gullible, but the opinion is that Jimbo Fisher will make the Aggies a contender in the SEC West sooner rather than later. Athletes are available and Fisher has coached eight quarterbacks who were drafted by the NFL, so he figures to mold Kellen Mond or Nick Starkel into an efficient performer. He also hired coordinator Mike Elko away from Notre Dame, calling him “one of the top defensive minds in the nation …” TEXAS A&M 31, ARKANSAS 21

Oct. 6, Alabama: Whether the quarterback is the SEC’s 2016 Offensive Player of the Year or the second-half hero of the national championship game who broke a bone in the index finger on his throwing hand in the first spring practice, Nick Saban is on the sideline and top-quality athletes are on the field. Alabama is the best program in the country, period. ALABAMA 28, ARKANSAS 13.

Oct. 13, Ole Miss in Little Rock: Arguably, Arkansas’ biggest game of the season. Recently, Vegas established six as the over-under for number of wins for Mississippi and 5 1/2 for Arkansas. The Rebels are banned from the postseason and this could be the start of a three-game in-state winning streak that would make Arkansas bowl-eligible. ARKANSAS 27, OLE MISS 23

Oct. 27, Vanderbilt: Might be the only time all season that Arkansas is favored vs. an SEC opponent. Starting his fifth year in Nashville, Derek Mason’s team is 6-26 in the SEC and his job is in jeopardy. Concerning is that quarterback Kyle Shurmur, who has started 28 straight games, produced 26 TD passes and 2,823 yards last year, second only to Missouri’s Drew Lock in the SEC. ARKANSAS 31, VANDERBILT 21

Nov. 10, LSU: Because of the schedule, Arkansas should have an emotional edge. The Razorbacks have the week off prior to LSU’s arrival and the Tigers will be seven days removed from another bitter contest with Alabama in Baton Rouge. Offensive coordinator Steve Ensminger, a former LSU quarterback, is apt to deliver on the oft-promised update of the Tigers’ offense. LSU 21, ARKANSAS 17

Nov. 17, at Mississippi State: Given the option of putting one pick on hold, this would be the game simply because of the status of quarterback Nick Fitzgerald. If he is at his dual-threat best, the Bulldogs should win. But, he said recently: “I’m not hurting when I run, but I’m not pushing it, either.” Last year, he threw 286 times and carried the ball 10 to 22 times in 10 straight games until the injury. MISSISSIPPI STATE 31, ARKANSAS 28

Nov. 23, at Missouri: Prolific last year, Drew Lock is hyped about the new offense under Derek Dooley, who spent five years as an assistant with the Dallas Cowboys. Lock says he is more comfortable, knowing precisely where his receivers will be on every pass play. He also says the Tigers, who used three and four receivers almost every play last year, will be in a wide variety of formations. MISSOURI 35, ARKANSAS 31

That adds up to 6-6, both doable and acceptable.

This article originally appeared in the June edition of Hawgs Illustrated

CORRECTION: Colorado State's conference was misidentified initially. That has been corrected.