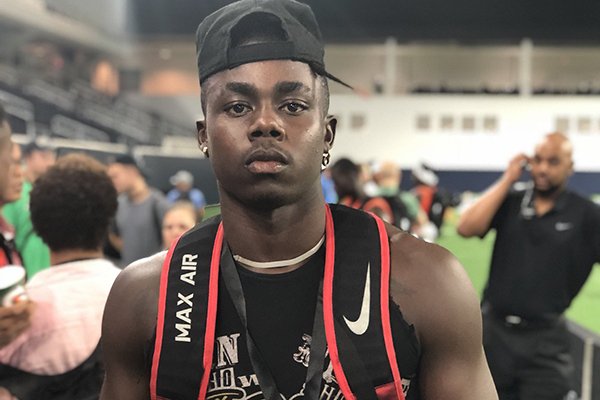 Dylan Wright, who's a major target of the Arkansas Razorbacks, is an ESPN 4-star prospect, the No. 25 receiver and the No. 145 overall prospect in the nation.

His drive to be the best is fueled by his love for his mother.

"She means everything to me," Wright said.

His mother played flag football when he was younger, thus where he learned to play the sport.

"She's who taught me how to play football because she use to play tight end," Wright said. "She's the one that taught me everything."

Initially, his mother was reluctant to let him play football.

"At first, she was scared because she didn't want me to get hurt," Wright said. "Every mom is scared, but once she started getting use to it and knowing I needed to get tough, she started pushing me more and more."

When Wright was 6 years old, he wasn't sure he wanted to play football.

"We use to have football practices down the street from my house and I use to run home from practice," Wright said. "I didn't want to play football."

He soon had a change of heart and his love of football took off.

"The next year I told my daddy I was ready to play football and I started loving it after that," Wright said.

Wright, who visited Fayetteville in February, said recently that he'll probably take an official or unofficial visit to Arkansas this fall. He plans to release a video of his top five schools in the near future. He said the Hogs will be one of those schools.

His mother has provided tough love when needed to help motivate him.

"She was just telling me ain't nobody is going to give it to you," Wright said. "You got to go get it. Do what you have to do."

Her upbringing has rubbed off on her son.

"She was always rough," Wright said. "That's why I'm so aggressive because she was the only girl. She has four brothers. She always grew up being aggressive and I guess that ran through my blood."

He explained why Stepp and his mother hit it off too.

"Just the vibe he gives off," Wright said.