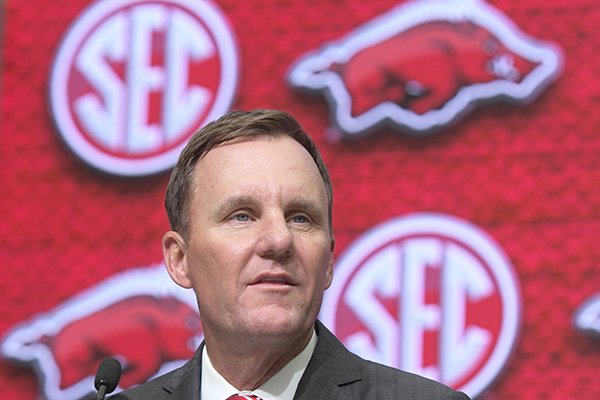 – "It's truly an honor to be the head football coach at Arkansas and be surrounded by players past and present."

– It's been 223 days since Morris landed in Fayetteville. The alumni and fans have welcomed him with open arms, he said. "We're going to work daily to build on and restore the traditions of the Razorbacks of the past, the present and the future."

– Morris has been impressed with strength coach Trumain Carroll and how he's transformed the players on campus.

– Santos Ramirez will wear an SEC Graduate patch on his jersey this fall.

– "The time is now, and the place is here. Fayetteville is a special place. Now that we're enclosing the north endzone, I'm hoping it becomes one of the toughest places to play in football."

– Morris says Arkansas wants to be a two-back, run-first offense. Defensively, Morris spoke about how he wound up getting John Chavis to Arkansas. He wants to be multiple and aggressive and disrupt the quarterback. Chavis came to mind right away when looking for a defensive coordinator. Morris added he wants to be on the cutting edge of all aspects of the game.

– Morris on expectations: No one is going to put higher expectations on this program than me. Whether we're picked to finish first or last, it's irrelevant at this time. We've heard the talking. How hungry is this football team going to be because of it? A lot of guys experienced what happened at Arkansas last season, so they've had to feel that and have that bitter taste in their mouth. Those that pick the order of finish don't understand what goes on in our building every day.

– We've got a lot of games to play before we get to play in Arlington against Texas A&M. We're focusing on the Arkansas Razorbacks.

– Morris on who he views as a rival: Right now I'd say the Arkansas Razorbacks. The team most capable of beating us is ourselves. I may sound like I'm giving coach speak, but this is how I live and how we operate our program. I know we play a couple of trophy games and I'm excited about them. We've got a rivalry game the first game of the year we better be prepared for.

– On the quarterback battle: If I knew the answer to the quarterback question we'd put it out there and let the media run with it. When we ran on the field for the spring game, the development of the position was going to take place from then to fall camp. Morris has met with all of his quarterbacks. "There's not a lifetime contract" once a starter is named. He hopes to name a starter at some point in time during fall camp.

– Morris on Kevin Richardson: There was a lot of uncertainty for a while. He didn't know if he was going to be cleared to play but he still interacted with teammates and it said a lot about him. Watching him and listening to him in a team meeting, people listen. He is a leader and has a great future in leading people. I'm excited about his experience.

– Morris on being a teacher: Outside of my mom and dad influencing my teacher, I wouldn't be here without a coach or teacher impacting my life. They saw something in me that others maybe didn't. I majored in math and minored in statistics. It's critical to what I do now. We're in a society now that needs so many male figures that impact lives, and coaches and teachers are where it's at. To be able to say I've proudly been a high school teacher and coach, teaching is what we do every day. That doesn't change whether you're in the classroom or out of it.

– Morris on Joe Craddock: He is one of the bright young minds in college football. When Dabo Swinney hired him, he had him sweeping the weight room floors. I knew he had something to him when a meeting was over and he wasn't saying anything. He was sitting and listening. When he and Craddock walked out he wanted to talk ball and they talked for an hour. I wanted to see how he responds to players when something goes wrong. How does he handle the tough situations? I trusted him with the quarterbacks. This guy is on the cutting edge, and we think similarly. He calls the plays, but we're in constant communication.

– On the offense: Two backs and run first. Tempo is about changing the pace of the game. Talking to defensive coordinators, you work in their favor playing one tempo the whole game. We'll continue to evolve with the personnel we have. We'll play to our players' strengths.

– Morris loves the redshirt rule. Sometimes guys when they know they're redshirting they tune out and aren't all there mentally and aren't sharp. He does feel the way recruiting has changed with the early signing period, he's probably going to be very much in favor of it. Signing a class early in his tenure "was awful," and really tough. We didn't have the luxury of building relationships. Having those relationships sound and solid, hopefully we'll have a great class.