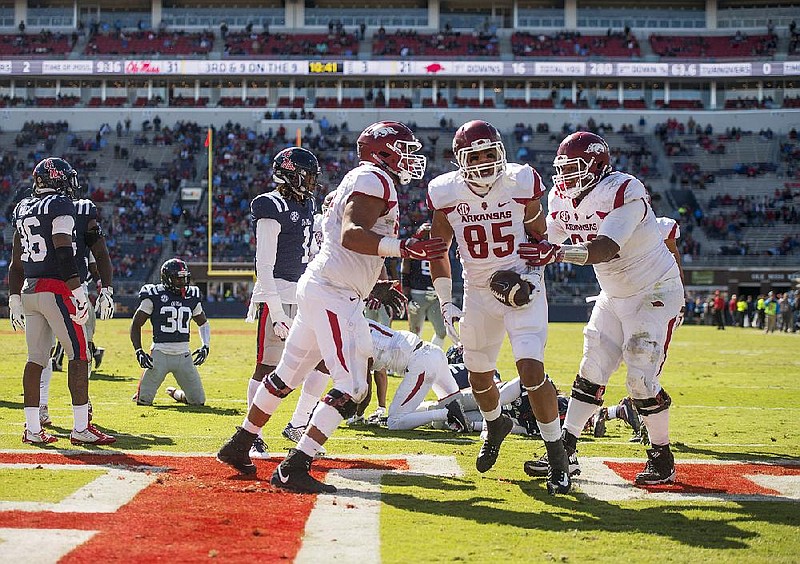 Cheyenne O’Grady and Jeremy Patton look, on paper, to be a solid 1-2 punch at tight end. Who do you have the most confidence in to be a reliable run blocker/pass catcher?

Tom Murphy: We're clearly talking about the best overall tight end here, and I think the delineation between these two is O'Grady is clearly the better catcher with superb hand-eye skills and Patton is probably the better blocker. It's close but Patton might have the more complete package.

Bob Holt: I think they both have the skills to be pretty effective in Arkansas’ new offense, but I tend to have more confidence in O’Grady because he’s made steady improvement while Patton has been slowed by injuries at times. Patton is going into his second season as a junior college transfer, so it’s possible he’ll be ready to take a big jump, though it’s a new offense for everybody.

Scottie Bordelon: When Jeremy Patton showed up on campus, I thought he was destined to be one of the best tight ends Arkansas has had. He's got a great frame and can move well. Things just didn't work out for him last year, but I see him being much more productive this fall. That said, I have more confidence in O'Grady putting up solid numbers in 2018. We saw in the spring game that O'Grady has some big-play ability in him and, from what we've heard from the new staff, tight end will play an essential role in this offense. I'm with Dudley. I think O'Grady has the better year.

True or false: An Arkansas tight end will finish the season with 400-plus receiving yards. If true, who?

Tom Murphy: I do believe the Chad Morris/Joe Craddock offense will target tight ends, as evidenced by their scrimmages, so I'll say O'Grady finishes with between 400 and 500 receiving yards with Patton a little less than 400.

Dudley Dawson: True. O'Grady. I think he is poised for a big, big year as Arkansas head coach Chad Morris and offensive coordinator Joe Craddock get the opportunity to show off a tight end in their offense, which is something they did not have the opportunity to do at SMU.

Bob Holt: I don’t think a tight end will have 400-plus receiving yards. Maybe if the Razorbacks had one go-to tight end such as Hunter Henry or Jeremy Sprinkle, that would be possible, but I see O’Grady, Patton and Austin Cantrell likely dividing up the yards as they did last season.

Scottie Bordelon: I'll say true, and I think O'Grady is the guy. I watched him play a few times in high school and he's always had great hands. He rarely drops passes, so that in itself gives him an edge.

Austin Cantrell had a specific fit in Bret Bielema’s scheme. How can he be best used this season?

Tom Murphy: My take is that when Chad Morris references being a two-back scheme, that lead blocker back is a Cantrell-like body. His pass catching numbers might hold steady or drop a bit, but as for movable H-back types, Cantrell's the man.

Dudley Dawson: Same way. As a blocker and someone who can line up a couple of places and catch passes.

Bob Holt: Cantrell’s best attribute is his blocking, but he’s shown the ability to catch passes when called upon, so I see him fitting into a dual role.

Scottie Bordelon: I think his role is going to be more as a run-blocker in goalline situations and short yardage. I don't see him getting a lot of targets. From what I've seen, I just don't believe that's his strong suit. He's the physical, hard-nosed (and all of those cliches) type of guy who can free up backs in the running game and protect the quarterback.

Bob Holt: I’d say over. He had 21 catches last season and should be in line to get a few more with the Razorbacks running a hurry-up offense.

Scottie Bordelon: I'll go over as well. Like I mentioned earlier, he doesn't drop many passes. If the ball is in his general vicinity and catchable, he'll bring it in. That'll be key, I think, in the red zone.

Can a player in this position group garner all-league recognition by season’s end?

Tom Murphy: I'm going to say this is unlikely, unless one of the tight ends becomes one of the top 2-3 targets on the team.

Dudley Dawson: As you can tell, I'm very high on young Mr. O'Grady. I think he has a legit chance to make one of the 3 all-league teams at the end of the season. It would help him if Arkansas could win a few more games than expected.

Bob Holt: I don’t see that happening. Arkansas has some good tight ends, I believe, but I don’t think one of them is going to put up the type of numbers to earn All-SEC recognition.

Scottie Bordelon: Ultimately, I don't believe it will happen. However, the players I talked to this summer were really high on O'Grady. They think he has all the makeup to be a Mackey Award candidate. O'Grady has the best shot at landing on an all-SEC team, but it's a no from me.