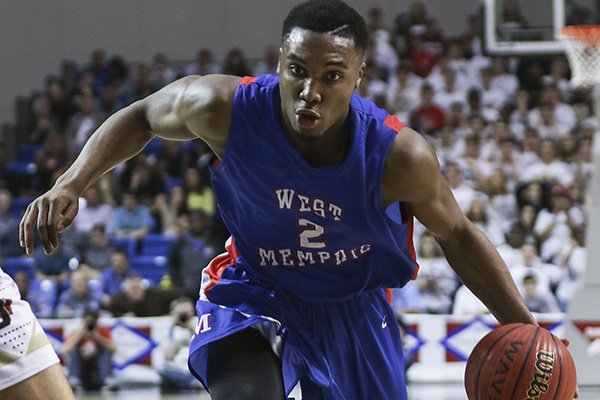 LAS VEGAS -- The final week of summer basketball is in full swing here, and the Arkansas Razorbacks coaching staff is making full use of the opportunity to see the top prospects in the nation.

Coach Mike Anderson and associate head coach Melvin Watkins started their Thursday at 8 a.m. by watching the 16-under Woodz Elite, which has three junior prospects with offers from the University of Arkansas, Fayetteville.

Prephoops.com and www.indihoops.com rank Woodz Elite No. 1 nationally in the 16-under age group. The team recently won the Peach Jam Championship for its age group.

Moore, 6-6, 210 pounds, led Woodz Elite with 22 points while showing his high motor that has no off switch. Most players dread the 8 a.m games, and Moore admits they are a challenge.

"You really have to prepare yourself the night before and get some rest and hydrate your body," he said. "Those 8 a.m. games don't play with you."

It's a mental thing for Moore when it comes to early games.

"I would probably say four or five minutes into the game you realize you have to push through it," he said.

Moore received an offer from Anderson and the Hogs in April. He has other offers from Iowa State, Memphis, SMU, TCU, Southern Miss, Abilene Christian and others. Florida also recently offered.

North Carolina, Virginia, Texas A&M and Miami have started showing interest. He plans to visit Iowa State in August and Arkansas in the fall.

He was named the Arkansas Democrat-Gazette All-Arkansas Preps boys Sophomore of the Year after leading the Blue Devils to a 29-4 record and Class 6A state runner-up finish.

Anderson and Watkins were just a few college coaches on hand for the Woodz game, and Moore appreciated seeing them.

The Hogs are trying to persuade Moore, Davis and Ongenda to bring their talents to Fayetteville much like how the Hogs landed three Arkansas Hawks in the last recruiting class.

"It's looking good right now with what they're offering all three of us," Moore said. "It's looking real good. It's a process. We'll see."

Woodz Elite had an adventitious day of traveling Wednesday. The team was scheduled to play the Joe Johnson Arkansas Hawks in the FAB 48 Tip-off challenge at 7:45 p.m. Vegas time, but its flight from Little Rock was diverted to Dallas because of a flap light that wouldn't go off in the cockpit.

The team had to de-plane and wait on another aircraft to finish the trip, landing in Las Vegas around 8 p.m.

Davis, 6-4, 175, has 11 scholarship offers from schools such as Arkansas, Auburn, Florida, SMU, Oklahoma State and others.

Wednesday's travel took a toll and made the 8 a.m. game more of a test.

"Man, coming off the plane and then getting on the plane is tough because of all the moving and getting to the spots of the plane," Davis said.

He scored 12 points in the victory Thursday and hit the game-winning free throw with 0.2 seconds left. He also liked seeing Anderson and Watkins court side.

"It's really exciting seeing them there, them watching us play even though we have the offer," Davis said. "They can see our skills and what we need to develop in."

"No specific date, but I'm sure during school time when we don't have ball we should head out to Fayetteville," Davis said.

Ongenda, 6-10, 192, has offers from Arkansas, Oregon, Oklahoma State, Florida and others. The spring and summer live periods where college coaches can watch prospects are exciting to him.

"It's nice having coaches watching me," Ongenda said. "Makes me play better. Show off my skills."

"He's really nice, he's humble, he stresses to me about coming and visiting," Ongenda said.

He said he likely will visit the Hogs, but has no date in mind. Ongenda is from Toronto, which is the same hometown as Razorbacks forward Gabe Osabuohien.

"He's told me it's a really good experience over there," Ongenda said. "He's just giving me advice. Think wisely before you make your choice."