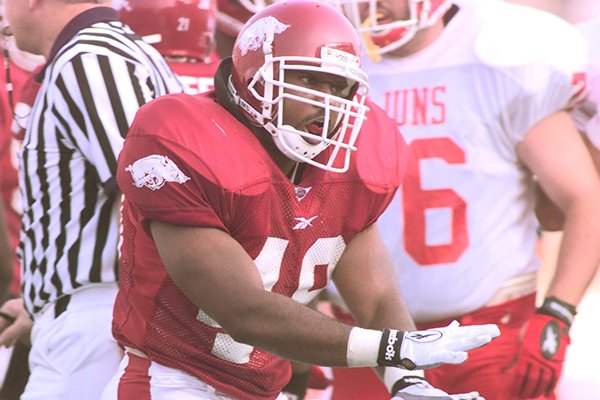 Arkansas linebacker J.J. Jones celebrates after making a tackle during a game against Southwest Louisiana on Saturday, Sept. 5, 1998, in Fayetteville.

Jai had offers from Texas A&M, Baylor, Louisiana Tech, Bowling Green and Alabama A&M prior to the camp, while the Hogs were Jalen's first offer.

Their father J.J. Jones, a Magnolia native, lettered from 1996-2000 for Arkansas while their mother Paula received her master's degree from the school.

"Receiving the first offer was exciting. It took me by surprise when I first got the news. But once it suck in I was just shocked and thankful to my parents and the University of Arkansas for giving us the opportunity to further our education at their school."

"To get the offer from Arkansas it was a blessing. It was like a dream come true because I had dreams of playing at the university and to go to the games since I was little and there's a chance to actually become a Razorback and follow my dad's footsteps it was just unimaginable."