Open practices a hit with coaches and prospects 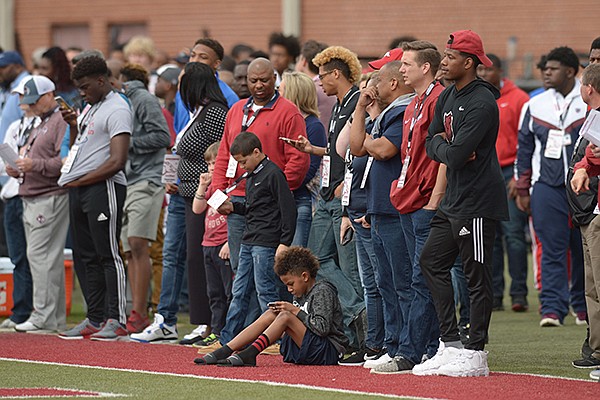 Visitors watch from the sideline during Arkansas' spring scrimmage on Saturday, March 10, 2018, in Fayetteville.

FAYETTEVILLE — While Arkansas will not be able to have any contact with recruits at the Red-White game in Little Rock on April 7 due to NCAA rules, it will continue to have high school coaches and recruits on campus as much as possible this spring and summer.

Arkansas coach Chad Morris said after Wednesday’s ninth spring practice that his program has hosted around 850 coaches on campus this spring. It is known there has been around half of that number of recruits.

“We welcome them every day," Morris said. "We've got a portion of our day set aside that our offense and defense staff that goes and meets with these high school coaches.

“We didn't have a clinic. That clinic is in Hot Springs. So we just opened our doors and said, 'Come on, we're going to talk ball.' That's been really receptive to our coaches in our state. We've got some that come back every day, some that come back once a week.”

Morris said he thinks that kind of open-door policy has gone over well with head coaches in the area.

“That’s been very beneficial,” Morris said. “It's given more of a personal touch, especially early on with what we need. And obviously the recruits, we've had some top-tier recruits. We had some here today. We've had a lot of people on campus.

“When you get them here, I've said it before, we've got a beautiful campus. We’ve got something great to sell."

Morris unveiled a part of his recruiting pitch.

“As I shared with our players today, don't be a guy, be the guy,” Morris said. “We've got an opportunity to sell to these recruits you can come here and be the guy. Be the reason.

“Some guys like that and some guys don't. They don't want to go be the guy, they want to go be where somebody else is the guy and they've already done it. That's OK. We're going to get great players here. Then when you get them here you've got to develop them. I've been very pleased with how that's going.”

Because the Red-White game is at an off-campus site on April 7, the NCAA prohibits any contact with recruits at the site. Instead of being on the sideline or allocated to a special area, recruits will sit scattered throughout the stands.

Morris is attempting to make the best of the situation.

“As we’ve shared with them, we want them to come and see the environment," Morris said. "We’re expecting it to be a packed house. I would be disappointed if it’s not.”

“Let’s pack that place out,” Morris said. “We’re going to have some phenomenal recruits there that are just going to be in attendance, just like a normal fan. Unfortunately we can’t have them on the field and we can’t put them in a certain section. They’re going to be all over the stadium and we have to bring that passion that I’ve seen since the day I walked in here to the spring game on April 7 because that’s going to be a big day for us.”