Okies in the Ozarks: Hogs benefit from Sooner State ties 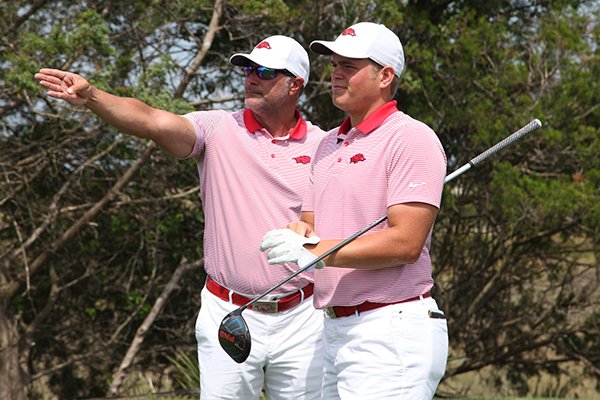 The back half of that run has had a strong Oklahoma influence. Taylor Moore led the Razorbacks in stroke average in 2015 and 2016, and Mason Overstreet was the individual runner-up at the NCAA Championships last year.

Now Overstreet, a sophomore from Kingfisher, Okla., and Tyson Reeder, a redshirt sophomore from Edmond, are preparing for a postseason that will bring them back to their home state, and won't require them to leave. Arkansas' regional is at Jimmie Austin OU Golf Club in Norman on May 14-16 and the NCAA Championships are at Karsten Creek Golf Club in Stillwater on May 25-30.

"It will be cool to play again in Oklahoma," Overstreet said. "I've had a bunch of people from my hometown tell me they are going to be there. I think we'll have a pretty good crowd out there for the Hogs.

"I told them they won't even need a hotel room."

Golf has long been an obsession in Oklahoma. The state has hosted professional major championships at Southern Hills in Tulsa and Oak Tree in Edmond.

College golf is great there, too, with Oklahoma and Oklahoma State combining for 12 national team titles, 17 national runner-up finishes and 10 individual NCAA champions.

The Sooners are the defending national champion. The Cowboys are the nation's No. 1 team.

Arkansas began to jockey for recruiting position in the state after the Razorbacks finished national runner-up in 2009. A year later, Arkansas committed the nation's No. 2 recruit, Moore, an Edmond native whose father and uncle played baseball for the Razorbacks.

"Taylor kind of helped us, and Mason kind of followed him and brought Tyson with him," said McMakin, a member of Oklahoma's 1989 national championship team.

Overstreet, a two-time state champion, took multiple recruiting visits to Oklahoma. Reeder transferred to Arkansas last year from Oklahoma State, where he redshirted his first year and was seldom used a year ago.

"Being at Oklahoma State, he's been good for the leadership part of it," McMakin said. "He's got a lot of talent and he's starting to play good at the right time."

Overstreet and Reeder both have played rounds at OU Golf Club, which underwent a large-scale renovation last year that reconfigured tee boxes, fairways and bunkers on seven holes. Tripp Davis, a college teammate of McMakin, oversaw the redesign.

"It's about 7,500 yards and with the kind of wind they'll get in May, it will be difficult," McMakin said. "The scores in the past when they had regionals there were high. The more difficult the better for us because of where we practice. We're not really a 40-under team. We're more of an even-par team and I'm looking forward to that being the site."

Overstreet finished second at a qualifier on the OU course as a high school senior.

"The course sets up well for us," Overstreet said. "It can be long. It stretches out pretty far."

McMakin said the wind at the OU course could be an advantage for the more local teams, like Arkansas, and a hindrance to western teams assigned to the regional, such as Pepperdine and BYU.

"They play in a dome every day. It doesn't blow 1 mph," McMakin said. "I'm glad they are coming in. It's definitely going to be a challenge for them because it's a different kind of golf. When it's blowing 30, you have to basically keep your ball on the ground all day long. We get a lot of wind here in the spring so we're used to it."

In addition to their regular practice rounds at Blessings Golf Club, McMakin said the Razorbacks will practice some at Fayetteville Country Club to get prepared for windy conditions that are expected in Oklahoma. That course sits on a steep hill on the southeast side of town.

"The windier it gets we'll go up to Fayetteville Country Club and get after it," McMakin said.

McMakin and Overstreet said they like Arkansas' chances of advancing past the regional. The low five teams from each of the six regional sites will qualify for the championship in Stillwater.

"Stillwater is a great golf course," McMakin said. "Karsten Creek is similar to what we practice on so I think we would have a chance to do really well there."