CBS yet to determine which teams will play on Black Friday 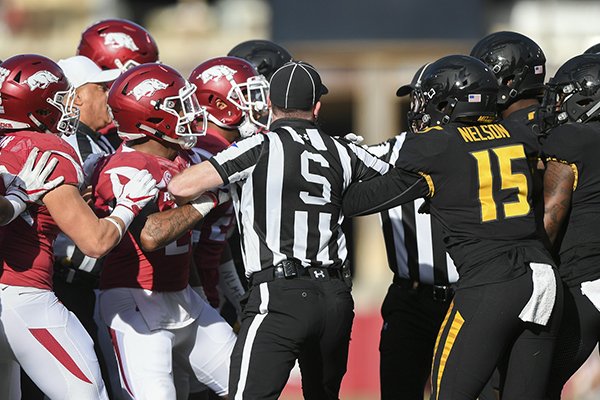 Arkansas and Missouri players are separated by officials during a game Friday, Nov. 25, 2017, in Fayetteville.

FAYETTEVILLE — For the first time since Arkansas and Missouri began playing annually in 2014, the game's date has not been finalized as of the SEC's spring meetings in Destin, Fla.

A CBS release Wednesday announced the network's broadcast schedule for the 2018 season, but did not specify which game would be played the day after Thanksgiving, or Black Friday, on which the Razorbacks and Tigers have played the past four seasons. The CBS release is timed each year to coincide with the SEC's spring meetings and the past four years has included the network's intention to broadcast the Arkansas-Missouri game.

"I would expect the Friday CBS game to be decided/announced later this summer, likely between now and SEC Media Days" in July, SEC communications director Chuck Dunlap wrote in an email Wednesday.

It is believed the Arkansas-Missouri game is still under consideration to be shown that day. The game has drawn an annual average TV audience of more than 2.9 million viewers, according to Sports Media Watch - low by SEC on CBS standards, but in line with trends for Power Five conference games that day that do not have championship implications.

The most-watched game between the teams came in 2014 when an estimated 4.4 million tuned in to watch Missouri clinch the SEC East championship for the second consecutive year.

Arkansas has played on Black Friday in 20 of the past 22 seasons. In addition to the past four games against Missouri, the Razorbacks played LSU on the day after Thanksgiving between 1996-2008 and 2011-13. The Alabama-Auburn Iron Bowl was moved to that window in 2009 and 2010.

The Razorbacks' game against Missouri has been tentatively scheduled to be played on Saturday each year, then moved to accommodate CBS. This year's game is scheduled for Saturday, Nov. 24 in Columbia, Mo.

Missouri has won three of four SEC games against Arkansas, including the past two. The Tigers won 48-45 in Fayetteville last season.

Arkansas announced earlier this month that it would move the Missouri game to War Memorial Stadium in Little Rock during years in which the Razorbacks are the host team, contingent upon improvements to the 70-year-old stadium, which include upgrades to the facility's dated infrastructure for TV networks.