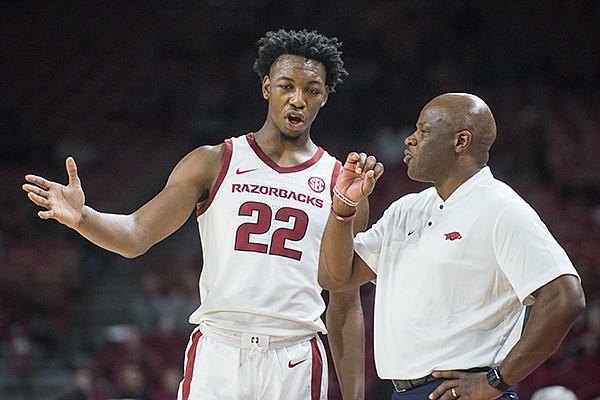 Gabe Osabuohien of Arkansas talks to head coach Mike Anderson in the second half vs Tusculum Friday, Oct. 26, 2018, during an exhibition game in Bud Walton Arena in Fayetteville.

FAYETTEVILLE — Mike Anderson, in his mind, has an idea of which players will assume key roles this season as Arkansas' opener against Texas in El Paso rapidly approaches.

But first, the Razorbacks will cap their exhibition schedule Friday night against Southwest Baptist at 7 p.m. in Bud Walton Arena. The final preseason tuneup will be another opportunity for players to prove their effectiveness and value in the lineup to Anderson and his staff in a game-like situation.

Through the team's Red-White game and exhibition win over Tusculum, Anderson added that he is still searching for guys to make up his core group, presumably around All-SEC forward Daniel Gafford and guards Jalen Harris and Isaiah Joe, who led Arkansas with 18 points on 5 of 8 from deep last Friday.

"Don’t take it for granted the minutes you get out there," Anderson said. "I’m just trying to create some habits in their mind that when they go out there, whether it be two, three, four minutes, give us the hardest, most efficient minutes you can give us."

Sophomore forward Gabe Osabuohien and freshman Reggie Chaney were among the players who Anderson felt performed well and stood out in the 96-47 rout of Tusculum. Chaney was one of five Razorbacks in double figures with 13 points and also added 10 rebounds, six on the offensive glass.

Anderson commended Chaney for his defensive effort at the top of the Razorbacks' full-court pressure as well. The freshman finished with three steals against Tusculum, all in the first half.

Osabuohien scored just four points on 1 of 4 from the floor, but grabbed eight rebounds, recorded three steals, blocked a shot and drew a charge following an ill-advised attempt on the other end. Anderson said Osabuohien took a hard fall in practice this week and injured his tailbone. He is hopeful the Toronto native can continue to be a spark moving forward.

"I thought he gave us that glue, energy guy that he did last year, doing multiple things for us, creating fouls against the opponents, attacking the basket, rebounding the basketball, making some nice passes out there, taking charges," Anderson said. "I thought him coming out there injected a lot of energy with our basketball team."

Keyshawn Embery-Simpson, who added 13 points on 4 of 8 from the floor, is another young player Anderson thought provided quality minutes last week, particularly in the second half. He scored nine points on three 3-pointers after halftime and took care of the basketball in 10 second-half minutes after a three-turnover first half.

Ethan Henderson, who played all of five minutes in the first exhibition despite Gafford's early foul trouble, is likely to see more playing time as well, Anderson said.

"You’re getting good minutes from this guy, that guy, first half, second half," he added. "Now we have to do it both halves. In terms of the combinations, we’re still searching. We’re still trying to find the guys that when they come out there, they’re clicking, they’re doing some really good things.

"I'll probably give extensive minutes to the guys that are going to be those core guys, so we'll see how the game goes. But I'm still looking and trying to find the guys that can go out there and perform."

Among the players Anderson is likely looking to to produce is junior college transfer guard Mason Jones, who scored eight points and misfired on all four 3-point attempts against Tusculum. Jones is 2 for 11 from deep in the Red-White and Tusculum games combined.

"He just didn’t make shots," Anderson said of Jones. "I thought he tried to do some of the other things. Again, it’s a lot of thinking going on. All you have to do is watch him, a lot of thinking. Mason, to me, I think is going to be one of our better free throw shooters and we saw him miss a couple of free throws at the line. But when you’re not scoring, what are you bringing to the table? It’s a learning curve for him as well."