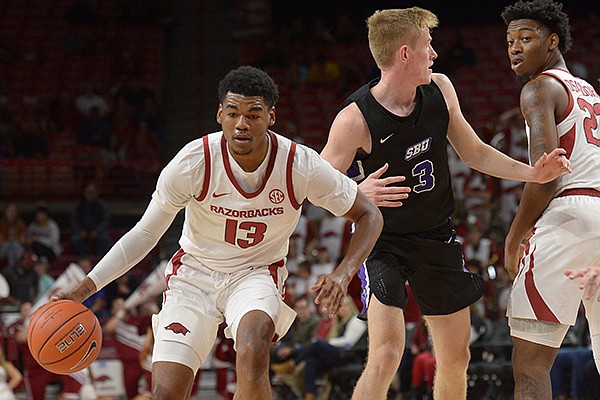 Arkansas Southwest Baptist Friday, Nov. 2, 2018, during the first half of their exhibition game in Bud Walton Arena. Visit nwadg.com/photos to see more photographs from the game.

FAYETTEVILLE — Arkansas sophomore guard Mason Jones walked through the Bud Walton Arena press conference room door for the first time with a smile on his face and a smoothie in his hand.

"This smoothie is amazing," Jones said laughing. "It's something (our nutrition lady) gives us, so I just drink it after games."

As for the smile, he had plenty of reason to wear one after helping the Razorbacks cap their preseason schedule with a 100-63 exhibition win over Southwest Baptist. Jones finished with 17 points and was one of four Razorbacks players to score in double figures in the win – Isaiah Joe 19, Daniel Gafford 17, Keyshawn Embery-Simpson 11.

Jones' performance on the offensive end was a positive one for coach Mike Anderson after scoring just eight points on 2 of 7 from the floor and misfiring on all four 3-point attempts last week. He was a combined 2 of 11 from deep in the Red-White and Tusculum games.

Friday, he buried a pair of 3-pointers and worked his way to the free throw line, where he connected on 7 of 8 attempts. He was also a team-best +36 when on the floor and finished with an offensive rating - points produced by a player per 100 possessions - of 142.7.

"He played basketball. I think he played the way he’s capable of playing in practice," Anderson said of Jones. "Maybe that’s good with the exhibition games and the Red-White game that he got a chance to get the nerves out. A lot of times, that’s nerves, that’s when you’re thinking. Maybe he got those nerves out and now he’s ready to help our basketball team. He’s going to be a big, big part of what we do."

Thursday, Anderson said his junior college transfer was perhaps thinking a bit too much while on the floor. Against Southwest Baptist, he was much more decisive with shot selection and with the ball in his hands on the offensive end, and played instinctive defensively.

On top of his 17 points, Jones did not turn the ball over, came up with a team-high four steals and contributed to Arkansas' 29-9 edge in points off turnovers. The Razorbacks' defense forced 30 Southwest Baptist turnovers in the blowout.

"He got to the free throw line, so, again, I thought he let the game come to him tonight."

Jones said that he doesn't allow pressure to mount on him leading into games.

"The coaches just harp and harp and make sure I get daily repetition," Jones said. "I don't lose faith in why I'm here, so I'm just going through repetition and making sure I get better every day."

Joe, who led Arkansas in scoring in both exhibitions and the Red-White game, added five more 3-pointers against the Bearcats, bringing his preseason total to 19. Jones said he and Joe are constantly learning from one another's games.