Ex-Hog points out flirting with cheerleaders 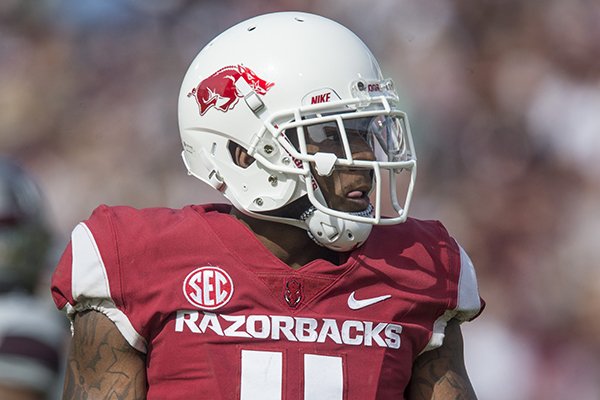 Arkansas cornerback Ryan Pulley is shown during a game against Mississippi State on Saturday, Nov. 17, 2018, in Starkville, Miss.

STARKVILLE, Miss. -- The problems for the University of Arkansas football team against Mississippi State started before kickoff Saturday, said D.J. Williams, a former All-America tight end for the Razorbacks.

Arkansas Coach Chad Morris, asked in his postgame news conference about players socializing with cheerleaders, said it was unacceptable.

"That's not something I would do," Greenlaw said. "I surely wasn't doing it.

"Some people have got different focuses. Obviously, you could see this game we weren't in the right mindset.

"I just hope everybody considers the seniors for this last game and goes out there and plays with their all, and gives it their all."

Arkansas defensive coordinator John Chavis came down from the press box -- his preferred spot to call a game -- and was on the field for the second half.

"We made the decision for him to come down, more so than anything for ... them to see the urgency in his eyes and in his voice," Coach Chad Morris said.

Linebacker Dre Greenlaw said it was good to have Chavis on the sideline for the first time this season.

"He came out there because he felt like he wanted to be on the battlefield with us," Greenlaw said. "He felt like we could have given more than what we're giving.

"His presence definitely makes you want to go harder. I felt like his presence was needed on the field. By the time he got on the field, though, I think it was just a little too late."

Saturday marked the first time Chavis has been on the sideline for a game since last season when he was Texas A&M's defensive coordinator.

Arkansas redshirt sophomore quarterback Cole Kelley didn't make the trip for the Mississippi State game because he was ill, according to UA officials.

Kelley started against Eastern Illinois and North Texas and had played off the bench in the other eight games before missing the trip to Mississippi State.

Horton -- a former Arkansas player, coach and administrator -- said Skinner died in his sleep Friday night when he was at deer hunting camp.

After Skinner's senior season at Arkansas, he was a fourth-round NFL Draft pick (No. 109 overall) by the New England Patriots. He also played for the Green Bay Packers in 1978.

Junior defensive lineman Dorian Gerald made his first start and had a season-high eight tackles.

Gerald, a transfer from College of the Canyons in California, started at defensive end with McTelvin Agim moving to tackle in place of T.J. Smith.

Agim started the opener against Eastern Illinois at tackle, then moved outside and had started the last nine games at end.

Arkansas lost to a nationally ranked team for the 11th consecutive time going back to 2016.

The Bulldogs are ranked No. 21 in the College Football Playoff poll, No. 23 in the USA Today coaches poll and No. 25 in The Associated Press poll.

Auburn is not ranked in any current polls.

Kelly Bryant, the former Clemson quarterback who will be eligible to play next season as a graduate transfer, attended his second Arkansas game Saturday.

This time Bryant was the guest of Mississippi State, which also hopes to add him to the roster.

Bryant, who was recruited to Clemson by Razorbacks Coach Chad Morris, visited Arkansas for the Razorbacks' 23-0 victory over Tulsa on Oct. 20.

Arkansas and Mississippi State are among four SEC schools recruiting Bryant, along with Auburn and Missouri. He also is considering North Carolina and Miami. Bryant has set his announcement date as Dec. 4, which is Morris' 50th birthday.

Junior running back Devwah Whaley played off the bench after missing the past three games while recovering from ankle surgery. Whaley had four carries for 16 yards.

Red on the road

With the Bulldogs wearing special silver uniforms -- or maybe they were gray? -- as a tribute to Mississippi State alumnus and World War II hero G.V. "Sonny" Montgomery, the Razorbacks wore red jerseys along with white helmets and pants.

It was the second time the Razorbacks have worn that uniform this season, and third time since 2012.

Mississippi State cut Arkansas' lead in the all-time series to 16-12-1.

The Bulldogs have dominated the Razorbacks recently with a 6-1 edge since 2012.

Since Arkansas joined the SEC for the 1992 season, the Razorbacks are 16-10-1 against Mississippi State, including 7-7 in Starkville.

Fun while it lasted

One of the loudest cheers at Davis Wade Stadium occurred because of something that happened 83 miles to the east in Tuscaloosa at Alabama's Bryant-Denny Stadium.

During a break in play, the giant video boards at each end of Davis Wade Stadium showed Jacob Godek hitting a 48-yard field goal for The Citadel on the final play of the first half to pull the Bulldogs into a 10-10 tie with Alabama.

Alabama pulled away to beat The Citadel 50-17. The Crimson Tide shut out Mississippi State 24-0 last week in Tuscaloosa.