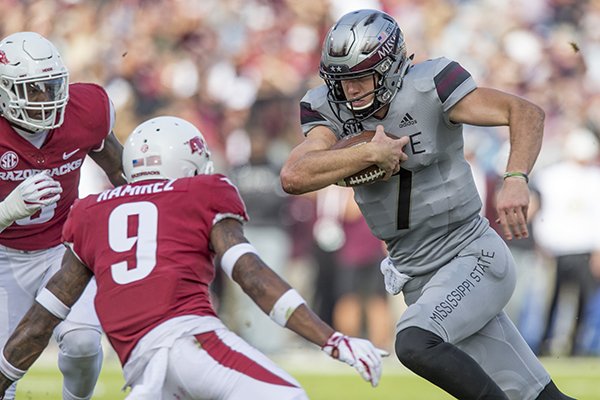 STARKVILLE, Miss. -- No SEC team has seen Mississippi State senior quarterback Nick Fitzgerald pile up the touchdowns against it more than the University of Arkansas.

Fitzgerald was an Arkansas killer again Saturday when he accounted for five touchdowns to lead the No. 21 Bulldogs to a 52-6 victory over the Razorbacks in his final home game at Davis Wade Stadium.

In three games against Arkansas since replacing Dak Prescott as Mississippi State's starting quarterback, Fitzgerald has accounted for 14 touchdowns rushing and passing as part of his 96 career total.

Texas A&M has allowed Fitzgerald the second-most touchdowns by an SEC team with 11.

Fitzgerald, 6-5 and 230 pounds, made the most of his combined 28 rushing and passing attempts Saturday in terms of getting the Bulldogs into the end zone. He completed 9 of 14 passes for 127 yards for 4 touchdowns, and rushed 14 times for 85 yards and 1 touchdown.

"I thought he did real well," Arkansas senior linebacker Dre Greenlaw said. 'He's been a great quarterback at Mississippi State.

"He's a big quarterback and he uses his legs real well. The offensive system works well around him. He plays his cards right. He's going to do tremendous things in the future at the next level."

Fitzgerald was 1-of-4 passing on Mississippi State's opening drive of the game, and the Bulldogs had to settle for a field goal.

At halftime, Fitzgerald was 4-of-9 passing for 38 yards. He hadn't thrown a touchdown pass, but he did have a 2-yard rushing touchdown as the Bulldogs led 17-3.

"I didn't start out very hot throwing the ball in the first half," said Fitzgerald, who never coughed up a turnover against Arkansas. "I came out in the second half and settled myself down."

Fitzgerald threw touchdown passes of 34 yards to Justin Jefferson, 4 yards to Keith Mixon, 15 yards to Osirus Mitchell and 19 yards to Austin Williams in the second half.

"They run a very simplistic defense in their first year there," Fitzgerald said of Arkansas' new coaching staff. "They really haven't gotten to install any of the real quirky things about it.

"You see a lot of man and single pressures and a lot of cover-4's. It's something that our offense is really designed to attack, and we went out there and executed. I definitely had a lot of time to throw the ball and huge gaps to run it."

Fitzgerald has set 12 individual Mississippi State records, but he's struggled at times this season in the passing game under new Coach Joe Moorhead. He had 10 passing touchdowns in nine games after being suspended for the opener against Stephen F. Austin for an undisclosed disciplinary reason. His only two touchdown passes against an SEC opponent came in a 28-13 victory over Texas A&M.

"Not really," Greenlaw said. "You leave guys wide open, and I could make those throws. When you play horrible defense and you let guys run past you, I mean, you can put a second-string quarterback out there and make those throws.

"But all credit to them. They saw the mess-ups, the mix-ups, and they threw the ball to the right guy that was open. They made some great plays."

Fitzgerald threw his fourth touchdown pass -- which pushed the Bulldogs' lead to 45-6 with 13:04 left -- after leaving the game for two plays after a 16-yard run.

Moorhead said Fitzgerald wasn't hurt, but he had something in his eye.

"We were going to let him finish off that drive," Moorhead said.

"I think I said all week long he's a quality football player, without a doubt," Arkansas Coach Chad Morris said.

"He has a lot of records and has won a lot of games."