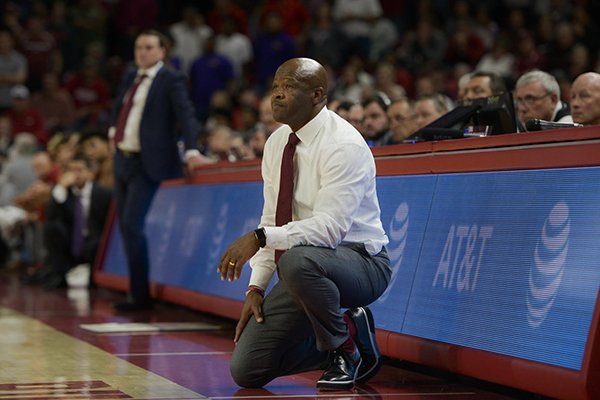 Arkansas coach Mike Anderson watches from the sideline during a game against Indiana on Sunday, Nov. 18, 2018, in Fayetteville.

The University of Arkansas hosted power forward Dericko Williams for an official visit over the weekend, and he was impressed after experiencing Fayetteville and the Hogs' 73-72 victory over Indiana on Sunday.

"The visit was very straight," Williams said. "I thought Arkansas was going to be more of a country town type thing. But it was totally different.

"It was just a good visit. I can't really explain it. I had fun. I like the school. I like the environment."

Williams, 6-8, 215, of Kinston, N.C., reports having numerous scholarship offers from schools like Arkansas, Houston, North Carolina-Greensboro, Washington, Louisville and others.

He was surprised with everything the campus offers for a good college experience.

Assistant coach Scotty Thurman has spearheaded the recruiting efforts for Williams, who played for North Carolina-based CP3 during the summer.

"Coach Scotty, that's my guy," Williams said. "He's real cool, real laid-back. He's been recruiting me for a long time throughout the whole summer. He's a very solid dude. He doesn't sugar coat any of the other stuff."

Thurman gave Williams a rundown on what to expect during his visit, and Williams wasn't disappointed.

"It was the way he told me when I came here," Williams said. "I found that out. Coach Scotty is a great guy."

Williams, who has a 42.5-inch vertical jump, plays with high intensity while bringing a physical presence.

Basketball Channel analyst Van Coleman, who's been covering the national scene for 40 years, sees Williams as an outstanding athlete that can develop at the next level.

"He's a high-major athlete. He's got excellent length," Coleman said. "He can defend with that length and with the bounce he has. He's the kind of guy high-major programs go and get because they can tweak him, and he can become the player they need. You can't teach the athleticism he's got."

Coach Mike Anderson told him the Hogs would use him at the small and power forward spots.

"He said you are what you can guard," Williams said.

Williams worked to improve his offensive skills over the summer.

He appears to be down to the Hogs, North Carolina-Greensboro, Houston and Washington. He's visited all the schools besides Washington. He expects to make a decision soon.

"Sooner rather than later," Williams said. "I can't really give you a date or time, but it will be real soon."