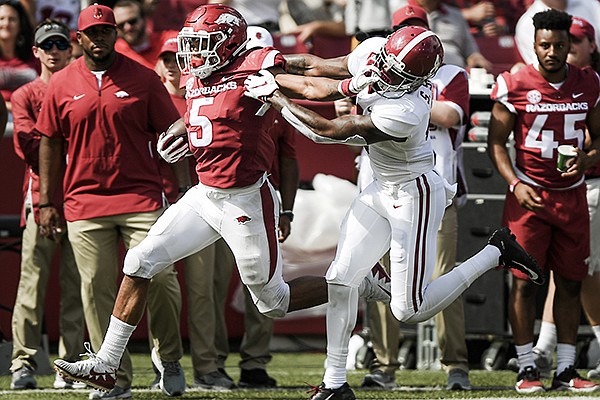 FAYETTEVILLE — For the first time since Darren McFadden did it in back-to-back seasons in 2006 and 2007, Arkansas had a 100-yard rusher against Alabama on Saturday.

Wearing the same No. 5 that McFadden wore, Rakeem Boyd rushed for 102 yards on 15 carries in Arkansas' 65-31 loss to the Crimson Tide. He also caught a 24-yard pass.

Boyd is popularly known for his role on Last Chance U where he was featured as a member of the Independence Community College team in Kansas. Arkansas coach Chad Morris praised Boyd for the impact he's had for the Razorbacks in a short time.

"He's a guy who just got here in August, started getting into playing shape and we're really starting to see him," Morris said. 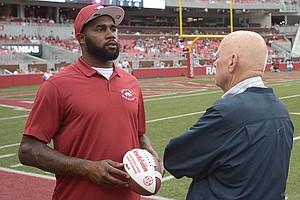 "He rushed for over 100 yards today, and he does a really good job in pass protection."

Before the game, McFadden was honored after being named a member of the SEC Legends Class of 2018 earlier in the week. He spoke to Arkansas players prior to the game.

"I got to talk to Darren McFadden a little bit and that pumped me up before the game," Boyd said. "He just said, 'Keep doing you.' So that's what I went out there and did."

It was the third consecutive game in which Boyd was Arkansas' leading rusher, but the first time he has eclipsed 100 yards. He had 66 yards on eight carries at Auburn two weeks ago, and 47 yards on 10 attempts last week against Texas A&M.

"This is three weeks in a row that this young man just continues to get better," Morris said.

"Rakeem comes to work every day. He's been a great addition to our offense with his explosiveness out of the backfield," Storey said. "He's been good and we just have to keep building on that."