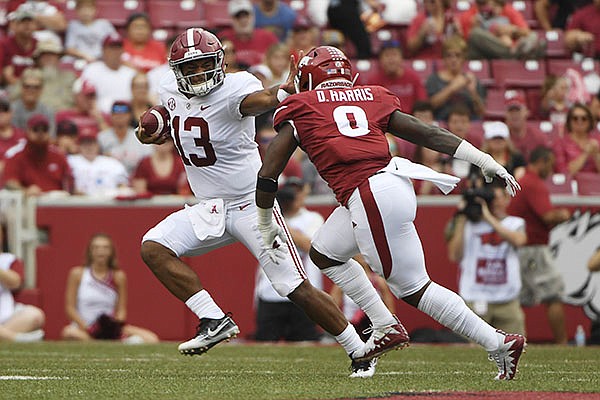 Alabama quarterback Tua Tagovailoa (13) tries to get away from Arkansas defender De'Jon Harris in the first half of an NCAA college football game Saturday, Oct. 6, 2018, in Fayetteville, Ark. (AP Photo/Michael Woods)

The ESPN telecast of the Arkansas-Alabama game began with only two wide-camera shots available.

With lightning in the area Saturday morning, ESPN invoked a policy of sending its technicians to cover with the cameras operated remotely from a truck outside Reynolds Razorback Stadium.

It’s probably safe to say that no one needed to see a tight shot to understand that No. 1 Alabama was for real. It didn’t take a zoom lens to tell the Crimson Tide was about to cruise.

Playing Alabama for the current Arkansas team might be a lot like playing Texas before the switch to the Southeastern Conference. The Razorbacks know the standard when seeing the heavyweight of the league in October.

The No. 1 Crimson Tide isn’t just the meter for the SEC West, it’s the gold standard for the entire college football world these days. Make that 24-karat gold.

And, with the offense Alabama brought to the Ozarks, it’s evident that scoring four touchdowns isn’t going to do it.

That’s what the Razorbacks did against a decent Alabama defense in a 65-31 defeat that was only in question for a few seconds early in the second quarter. That’s when Ty Storey fumbled near the goal line on a play that could have cut the deficit to 21-14.

Calling the Tide’s defense decent may be a little bit of a stretch. While not a vintage Nick Saban-coached defense, Alabama still forced three turnovers, including a pick six when Arkansas receiver Chase Harrell tipped a Storey pass in the fourth quarter.

The Hogs hit their 2018 SEC high for total offense with 405 yards, and much of it was against Alabama’s top defenders. Storey passed for 230 yards, and Rakeem Boyd slashed for 102 yards. They only punted three times and managed 22 first downs.

It was a well-called game by Arkansas offensive coordinator Joe Craddock. He had the right play most of the time, and the Hogs did move the ball. Arkansas coach Chad Morris says his offense — and Craddock often repeats it — has answers for about anything a defense can throw at it. That looked true for the first time against Alabama’s complex blitzes and athletic defenders.

Those seemed like nice numbers for an offense that is showing improvement halfway through the first year under Morris — until there was a glance at what Alabama did to an improving Arkansas defense. The Tide finished with a season-high 639 yards, including 463 in the first half when quarterback Tua Tagovailoa completed 10 of 12 for 334 yards and four touchdowns.

Tagovailoa played only one series in the second half, a touchdown drive that was mostly running plays. His only pass in that drive (and for the half) was batted down by Armon Watts.

The only knock against Alabama had to be pass protection. Make no mistake, it was good and Tagovailoa is athletic enough to run the bootlegs that are tough on defensive ends. But, the Tide held both Randy Ramsey and McTelvin Agim much of the day, grabbing them from behind or hooking an arm around their necks if they fought through to chase Tagovailoa. Alabama is too good for the officials to give it that kind of help.

“Alabama is the best team in the country for a reason, and I think they showed it,” Morris said. “I think that they had speed all over the field. They are extremely effective and impressive as I’ve seen on offense.

“I thought that Coach Craddock and our offensive staff did a great job putting a plan together. Ty Storey keeps showing his grit and his fight. [Storey] continues to get better. That’s what I shared with him on the sidelines, about how proud I am of him. Getting Cole Kelley out there in short-yardage situations is a big help to us. It allowed us to be more efficient on third downs.”

Morris said the improvement just comes as coaches learn their team and abilities in a new system.

“I think that when you coach offensive football, it takes time to create continuity,” Morris said. “It takes time to create consistency. You go through growing pains, and you find out that who you thought were your playmakers may need to be put in a different position. You try and balance that as you’re adding your offense it and realize that maybe you need to scale some stuff back. It’s a process, and it’ll continue to be a process. I think you see that we continue to add a little bit each week about who we are and who we want to be. We won’t get to it all this year, but we’ll get to what they can retain and what they can execute.”

The Arkansas defense could not force the lost-yardage plays like in its first two SEC games. Alabama did not give up a quarterback sack. Of the Alabama total of six yards lost for the game, three yards were on plays to kill the clock to end a half.

Those are Heisman Trophy-type numbers. And, Tagovailoa might win college football’s trophy for the most outstanding player, especially if the Tide doesn’t find some answers at linebacker and the secondary.

The sophomore quarterback may need to produce big numbers to keep the Tide winning. He probably can do it, too. It’s an offense that entered with a per game average in total offense of 553.2.

The Tide took advantage of three turnovers to convert 21 points, a number that Morris said was too much for such a potent offense.

“Defensively I thought we fought hard,” Morris said. “There were two fourth-and-ones, and they really came up with nothing on those. I know one play was overruled. I thought the story of the night was big plays. We gave up entirely too many big plays. I thought you saw the ball in space, and you really saw the true team speed that they have. They were able to make some major plays there.”

Linebacker Dre Greenlaw led the Hogs with 13 tackles. He was wowed by the Alabama talent, especially Tagovailoa.

“He definitely has a quick release, but that’s a great team, a great football team,” Greenlaw said. “They have football players all around.

“Receivers, running backs, guys up front, quarterback; I think they’ve got a complete football team this year and they know it. A couple of times during the game, I guess it was someone getting out of their gap (to allow big plays), they just did a really good job of executing and just knowing where to hit the ball at.

“All credit to them. They made some big plays and we just got to look at this game and see where we messed up, and I know for a fact were going to fix it by Monday of next week, so we just got to keep pushing.”

Storey opened the game finding tight end C. J. O’Grady for big plays in the middle. Then, as the Tide seemed to get the message, there was room for Boyd both on the ground and with swing passes. Storey also found some room on called quarterback runs, although he lost two fumbles.

It was striking to note Dan Enos, the former Arkansas coordinator, on the Alabama sideline coaching Tagovailoa and Jalen Hurts, both lacking height. Enos picked 6-7 Cole Kelley and 6-4 Daulton Hyatt (from Alabama) during his time as quarterbacks coach at Arkansas. Storey was signed under Jim Chaney’s watch as quarterbacks coach.

All of that aside, anyone could play quarterback at Alabama and do well now. The complementary talent is up, up and away in every area. There are three or four blue chip running backs to make linebackers play honest and five or six wide receivers to make big play against any secondary that tries to play man coverage.

Arkansas defensive coordinator John Chavis promises the Hogs are going to play man in the back end. They were unable to stay with Tide receivers on simple slants or basic posts. Alabama was just too fast for the Hogs on the outside. Tagovailoa picks the right one every time and does not miss.

It was clear the Tide wanted to exploit that man coverage in the first half. It was equally clear that the plan was to hammer away with the running game in the second half, shortening the game. That produced a slimmer margin for the Tide in the third quarter, just 10-7.

Alabama needed just three plays to score touchdowns on its first two possessions, and unlike the previous two weeks against Auburn and Texas A&M, the Arkansas defense never found any answers.

Tagovailoa found tight end Irv Smith in the right flat with De’Jon Harris chasing on the game’s first play. Harris couldn’t catch Smith as he turned the corner, then Smith found defenders pinned inside as he sprinted the Alabama sideline on the 76-yard play.

The second Alabama score came on a fumbled reception by Smith, the second play of the possession. After a 1-yard run off tackle, Smith rambled 47 yards with a pass, then fumbled it forward at the 12 when Ryan Pulley tugged his arm from the side. Wide receiver Henry Ruggs covered it in the end zone.

It was the second straight week that Alabama did not punt. The Tide failed on downs with 13:34 left in the second quarter. The visitors let the clock run out to end both the first half and the game and scored on their other 10 possessions, averaging 10.8 yards per snap.

The Hogs trailed 41-14 at the half with both scores from O’Grady. The junior tight end scored on an 8-yard pass from Storey, beating man-to-man coverage with a corner route. Kelley faked a plunge from the 1-yard line before raising up on a jump pass to O’Grady for another touchdown.

The Hogs added 17 points in the second half. De’Vion Warren caught a 17-yard pass from Storey. After Warren returned a kickoff 78 yards, Kelley powered over from the 1-yard line. Connor Limpert added a 41-yard field goal in the third quarter.