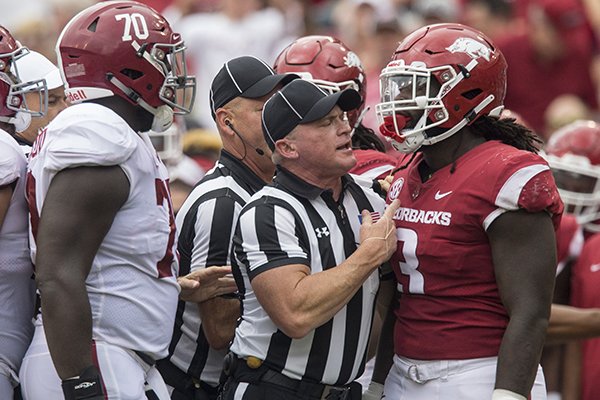 An official separates Arkansas defensive end McTelvin Agim and Alabama offensive lineman Alex Leatherwood after a play in the second quarter of a game Saturday, Oct. 6, 2018, at Razorback Stadium in Fayetteville.

FAYETTEVILLE -- Alabama needs little help from the other team to win games these days as aptly pointed out by University of Arkansas Coach Chad Morris after the No. 1 Crimson Tide's 65-31 victory over Arkansas last Saturday.

However, the Tide were the beneficiary of every booth review and also had a couple of head-scratching decisions go their way on back-to-back snaps in the second quarter that cemented their edge against the Razorbacks.

The first play came on a first and 10 at the Arkansas 49 with Alabama on the march and leading 21-7. The on-field officials determined Alabama tailback Najee Harris lost a fumble, which was recovered by Arkansas safety Santos Ramirez, after a 7-yard carry.

As the play was being reviewed by the command center in Birmingham, Ala., former Alabama quarterback Greg McElroy said on the broadcast the ball looked to be "wiggling" prior to Harris' backside and elbow hitting the turf and as Ramirez's hit fully dislodged the ball. The collaborative replay team was also checking to see if Ramirez led with his helmet and was subject to a targeting foul, the ESPN crew announced.

The replay team determined Harris' right elbow had made contact with the turf prior to the ball coming free, on overturn that surprised ESPN play-by-play announcer Dave Pasch. Ramirez was not subject to a targeting ejection.

"As soon as I hit him, he let the ball go and I fell on it," Ramirez said. "It was indisputable, so I don't even know how they overturned that.

"I felt like the ball was out, just looking from in-game speed. He let it go, and I fell right on it. But you know how things go sometimes, especially when you're playing Alabama."

Alabama quickly capitalized on the overturned call, with Tua Tagovailoa hitting Jerry Jeudy with a 42-yard touchdown pass on the next play.

On that play, Alabama right guard Alex Leatherwood clearly had his arm wrapped around the neck of Arkansas rusher McTelvin Agim in the Tide backfield.

"He kind of had me in a choke hold," said Agim, who Tweeted out a picture of the encounter side by side with a still shot of a Ving Rhames choke hold move from a movie. "It was just like, 'Lord knows. If the ref don't call it, the Lord knows what happened, man.' "

Agim was visibly agitated after other plays in which he reacted as if he had been held.

"I guarantee you he wasn't the only person frustrated," Arkansas defensive coordinator John Chavis said, without giving his opinion of the non-calls.

"If you say, 'Hey Coach, were you frustrated?' There were a couple of times that I was, but I've got to keep my composure and I've got to help them keep their composure, and that's what we've got to do."

Morris has not been critical of the officiating in his first season in the SEC. He acknowledged after the Auburn game and again Monday that he and his staff send in questionable plays to the SEC office.

"We turn in plays each and every week, just for our own knowledge of how we can coach better and teach better," Morris said.

Junior tailback Devwah Whaley was upgraded to a green (limited contact) jersey for Tuesday's practice. Whaley, who is day to day after recovering from a concussion two weeks ago, was participating in blocking drills against dummies with his unit.

Right guard Johnny Gibson also joined the list of players in green jerseys. Gibson did not participate in the heavy sled drill work but ran through other drills with the unit.

"Just a little sore," said Gibson, who participated in interviews after practice.

Cornerback Britto Tutt, who was back at practice last week but did not play against Alabama, was also in green.

Briston Guidry, one week removed from arthroscopic surgery to clean up a previous knee injury, was in yellow along with offensive tackle Noah Gatlin (ankle), who has not played since the North Texas game after getting a couple of starts in place of Colton Jackson.

Coach Chad Morris does not want the Razorbacks to look back at the team's 1-5 start, the worst six-game record for Arkansas since Coach Frank Broyles' first team in 1958 started 0-6. Morris talked about hitting a reset button Saturday and Monday, and the Razorbacks echoed that approach during Tuesday's interviews.

"It's a new season, Day One," defensive back Kevin Richardson said. "We're talking about focusing on the fundamentals and the finish."

Arkansas defensive coordinator John "Chief" Chavis gave his unit something to get fired up about Tuesday.

Chavis was demonstrating what he wanted to see in a pass rush, so he ran up to the "blocker," safety Joe Foucha, executed a spin move after making contact and kept going on his rush. Players could be heard hooting and cheering the demonstration from Chavis, who will turn 62 next Tuesday, in the Walker Pavilion.

"I heard him over there and kind of peeked at it," defensive lineman McTelvin Agim said. "Man, I love Coach Chavis. He's a great dude to be around. He's a great man. ... He's not young, but he's energetic."

Sophomore receiver De'Vion Warren posted his first touchdown catch as a Razorback on his 17-yard grab from Ty Storey in the fourth quarter against Alabama.

"It was amazing," Warren said. "As you saw, I didn't know what to do, so we just celebrated with my teammates as we always do."

Warren said he was the second option on the play behind the tight end.

"Ty threw a pretty ball. I just had to make the catch," Warren said.

Warren scored his first college touchdown last season on a 100-yard kickoff return against Auburn, giving him scores against the two SEC West powers from Alabama.

"It just shows I'm always ready to make an impact no matter who the team is, if it's the No. 1 or No. 2 team or a team not ranked," Warren said

Tight end Cheyenne O'Grady has moved into fourth on Arkansas' receptions chart this season in only two games.

O'Grady had a game-high seven catches for 48 yards, including two touchdowns, in last week's loss to Alabama.

His first score came on a third and goal from the 8 late in the first quarter.

"We went three wide and they were playing us in man [coverage]," O'Grady said. "The play was designed, I could either go inside or outside. The guy [cornerback Trevon Diggs] was put in a bind because I ran the corner route and he didn't know if he should take me or take the guy coming inside, so he was put in a bind. That made me come wide open."

Members of the Arkansas baseball team, who had just been honored for their runner-up finish at the College World Series, got to celebrate with O'Grady in the south end zone after the score, with Isaiah Campbell, Dominic Fletcher, Caleb Bolden and others recording the touchdown on their phones.

Midway through the second quarter, with Arkansas at the Alabama 3, quarterback Cole Kelley faked a run, then threw to O'Grady crossing right to left in the end zone with Alabama's Deionte Thompson trailing him.

"We were trying to sell the run," O'Grady said. "The play is designed where I'm supposed to just go right up the Sam [strong-side linebacker] and go vertical. But there was a safety sitting right there, so I had to try to go across his face and it ended up working out."