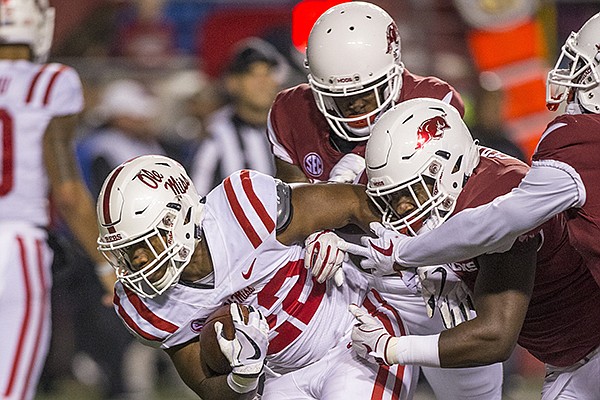 FAYETTEVILLE — Arkansas defensive coordinator John Chavis is looking forward to the day when he can walk into his Monday press conference with a smile on his face.

Over the last two weeks, and for much of Arkansas’ six-game losing streak, he’s had little to smile about. His Razorbacks defense has allowed 1,250 yards of offense to the Southeastern Conference’s top two offenses and given up nearly 100 in the past two weekends.

Chavis has been the leader of a number of top defenses in college football in his quarter-century as an SEC coordinator. A Chavis-coached defense has ranked among the top four in the league in total defense 15 times.

Through seven games, Arkansas ranks 102nd nationally in total defense and is giving up better than six yards per play. Monday, when asked about the struggles of the last month and a half, Chavis clung to the old adage that when life knocks you down, you have to keep getting back up.

“We're going to win, and on my side of the ball, it'll be on my shoulders to make sure that it happens," he said. "I'm here to help this program and to put the defense on the field that's capable of not just competing but winning. I take it personal, there's no question about that. I own my work. I'm not going to run away from it.

Chavis added that he takes it on himself, too, to have his defense prepared to close games late. Twice this season – at Colorado State in Week 2 and Saturday against Ole Miss – Arkansas has allowed a go-ahead touchdown in the game’s final minute to erase a double-digit lead.

The Rebels averaged 9.5 yards per play in the fourth quarter alone in their 37-33 win, and quarterback Jordan Ta’amu totaled 154 yards of offense – 48 rushing, 106 passing.

In the fourth quarter at Colorado State, Arkansas’ defense gave up 195 yards - 150 through the air to quarterback K.J. Carta-Samuels.The Razorbacks rank 123rd in the country and last in the SEC in fourth quarter points allowed at 11.8 per game.

“You can't give up big plays in the fourth quarter,” said Chavis, whose unit allowed five explosive plays (13-plus yards) over the final 15 minutes against the Rebels. “You can't do that and expect to win. Whether it's schematically, or whether it's tackling, it's on me. It's on me because I'm the one who has the opportunity to go teach them and prepare them for that.”

Tackling must be a point of emphasis in the final stretch of the season. Chavis said he continues to preach and teach fundamentals and players are receptive, but improvement in that area has not been seen of late. Safety Santos Ramirez’s play has been called into question as well. His missed tackle on Ole Miss tight end Octavious Cooley along the Rebels’ sideline led to a 66-yard touchdown midway through the third quarter.

The play was reminiscent of Alabama’s Irv Smith Jr.’s touchdown catch and run along the Crimson Tide sideline on the first play from scrimmage a week prior. Ramirez’s five missed tackles entering the Ole Miss game were third-most on the team, according to CFBFilmRoom.com, behind linebacker De'Jon Harris and defensive back D'Vone McClure with six apiece.

“He knows, and he gets down on himself, and that’s the one area he’s got to get better at,” Morris said of Ramirez, a team captain. “He’s got to play the next play. He understands coming to balance and leveraging the football. As he and I were talking yesterday, he said, ‘Coach, I’ve got to keep getting better,’ and that’s the message.”

Chavis, not interested in singling out Ramirez, said each defensive player needs to improve in that regard.

“That's something if we had gotten to the point where we were as good as we can be, we wouldn't need to practice we would just go play,” he said. “We worked on fundamentals yesterday. We didn't have pads on. We worked on tackling, we worked on tracking and doing those kind of things. It's something you've got to continually do to improve, as I said. When I talk about our players I really mean it. There's not a single guy on our football team that can't get better.”

The good news, perhaps, for Arkansas is it will get a break from SEC play on Saturday as Tulsa arrives for an 11 a.m. kickoff. The Golden Hurricane (1-5, 0-3 American Athletic Conference) have dropped five consecutive games since a season-opening win over Central Arkansas.

Tulsa ranks in the middle of the pack in the AAC in total offense, averaging 381.2 yards per game, and next-to-last in the league with 17 offensive touchdowns, 11 of which are rushing. Slowing a Tulsa running game that has totaled at least 167 yards each week and had 199 against Houston, led by potential No. 1 draft pick Ed Oliver, is a priority this week for the Razorbacks.