Offense disappointed in inability to finish 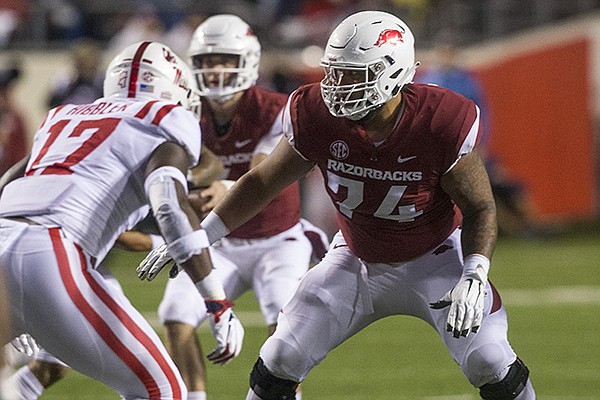 FAYETTEVILLE — Arkansas offensive lineman Colton Jackson could feel everything beginning to take shape as he watched running back Rakeem Boyd roll 69 yards for a touchdown against Ole Miss on Saturday.

Boyd’s first career score put the Razorbacks ahead 17-3 in the first quarter, and it appeared Arkansas’ offense was clicking and continuing to build on the momentum it gained the previous two weeks against Texas A&M and Alabama.

The Razorbacks then took their biggest lead of the night early in the second quarter following La’Michael Pettway’s 39-yard touchdown grab from Cole Kelley.

Arkansas failed to find the end zone the rest of the night.

“It’s frustrating because some stuff that was working for us early on wasn't really clicking (later in the game),” Jackson said of the second half production. “We're having to move some stuff around with other options and when they weren't working it got a little frustrating. It is what it is.”

Aside from Boyd, the first Arkansas back to rush for 100-plus yards in consecutive games since Rawleigh Williams to close the 2016 regular season, tight end Cheyenne O’Grady played a key role in the Razorbacks’ hot start, hauling in his third touchdown of the season on a 39-yard strike from Ty Storey.

O’Grady, however, was not a factor after the first quarter. He was targeted only twice, and, according to offensive coordinator Joe Craddock, taken away large in part to adjustments made by the Rebels’ defensive staff.

In the second half, Arkansas totaled just six points on a pair of Connor Limpert field goals after drives stalled in the red zone. The Razorbacks were held scoreless in the fourth quarter for the third time this season and second time in Southeastern Conference play.

The Kelley-led offense picked up just 51 total yards on 15 plays, giving way to Reid Bauer’s only two punts of the night and consecutive Ole Miss touchdowns.

Craddock, when asked Monday for his thoughts on the team’s offensive production, recalled the Week 2 loss at Colorado State and failure to tie or take the lead in the final two minutes against Texas A&M in Arlington.

“I thought up until the last three drives there we did some good things,” Craddock said. “But again, if you can’t finish the game, its really doesn’t matter. The most disappointing thing is that it continues to be kind of a reoccurring theme that we just can’t finish."

“That’s one thing we are going to have to get over the hump," he added. "We have to win a game like that to gain the confidence it takes to go ahead and put a team away. We had a chance to do that and couldn’t do it. You gotta have the want-to and we do.”