Anderson to experiment with lineups in first exhibition 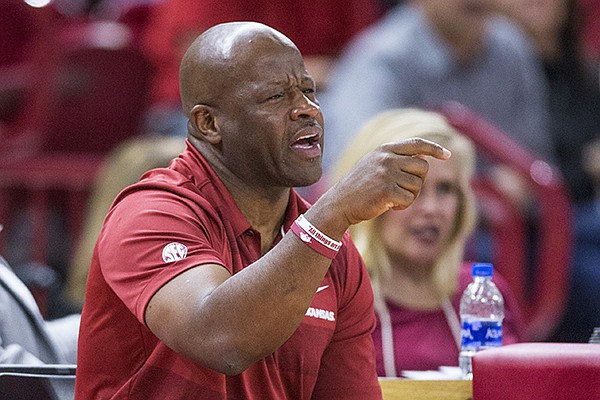 FAYETTEVILLE — Arkansas is just more than two weeks away from its season opener against rival Texas in El Paso, which means it's time for Mike Anderson – beginning his eighth season as head coach of the Razorbacks - to begin nailing down lineups and assigning roles.

Friday night's exhibition against Tusculum will provide him and his staff the first of two game-like opportunities to do just that ahead of the Nov. 9 meeting with the Longhorns. Friday's game is schedule to tip off at 7 p.m.

Anderson said Thursday he doesn't, as of now, have a starting lineup in mind. That will be a "gametime decision." He is more looking forward to experimenting with lineups over the next two weeks and evaluating which guys can play effectively in the minutes they're given.

"I think that’s going to be the mindset going in," he said. "It might be a situation in the game I platoon five for five but for the most part I want to see combinations. I want to see guys playing with Daniel (Gafford) and with Adrio and Gabe, Jalen Harris, Keyshawn … how those guys go out and perform in different settings. So one group may start the first half and the second half it may be another group."

Anderson added that he will not place a minutes restriction on any of his players, even Gafford, and has plans to play everyone on the roster at some point in the game. While that may be the case, he is eager to identify more of his core players, which begins with Gafford and Harris.

Freshman sharpshooter Isaiah Joe certainly made his case in the Red-White game last week by adding a game-high 31 points on 9/14 from distance. Junior college transfer Mason Jones also poured in 22 for White, and Gabe Osabuohien, tied for the team lead in charges taken a season ago (8), added 20 points and eight rebounds as well.

"We’ll let them play and let them go out there and see what they’re capable of doing," Anderson said. "I always think guys earn minutes in practice. So have they earned an opportunity to get out there? Show me what you've got. Show me what you’re working with. So I want to see it. What are they going to bring to the table?"

One way, Anderson said, players can make a statement for more playing time is producing on defense. Anderson has stated this preseason he hopes his new-look group, which features more than a handful of unproven scorers, becomes a defensive-minded bunch.

The Razorbacks finished 12th in the SEC last season in defensive efficiency and 106th nationally allowing 101.7 points per 100 possessions, according to KenPom. It marked the first time since Anderson's first season his team finished outside the top 100 in that regard.

"If you want to impress me, impress me with your defense. I’ve seen the offense," he added. "It can come and go. A guy may have 30 points one night and may have two the next night. But what do you do in between? What are the things that you do to help our basketball team have an opportunity to win?

"I just think defense is the constant. It’s got to be there night in and night out. ... I think for the most part we’re just trying to see the guys that are going to be ready to play."