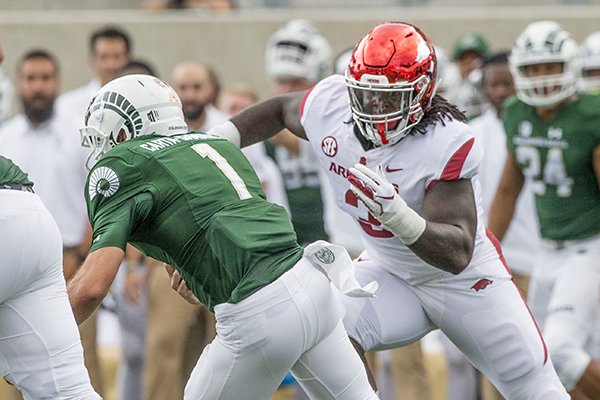 The reason is two-fold. The Razorbacks are a tad short in personnel at end and Agim wreaked some havoc at Colorado State mostly playing end.

Agim had 4 tackles -- including one for a 7-yard loss -- along with 2 forced fumbles, 2 quarterback hurries and 1 fumble recovery against the Rams. He also broke up a pass behind the line of scrimmage that was credited to Gabe Richardson, who was right behind him in pursuit of K.J. Carta-Samuels.

Veteran end Randy Ramsey, who suffered a hamstring injury in camp and missed the first two games, is likely to see his first action Saturday, and transfer Dorian Gerald will probably miss his second consecutive game with an ankle injury.

The strong play of senior Armon Watts in his first start at tackle also gives defensive coordinator John Chavis good reason to keep Agim on the edge. Watts had five tackles, including a sack and forced fumble, last week.

"We're going to put our best four out there, and that's what we did," Chavis said. "I think our guys up front played well for us."

Chad Morris is part of a contingent of up to eight Arkansas coaches who were on the road recruiting Thursday or will be tonight. During the evaluation period that started Sept. 1, the Razorbacks can total 42 evaluations from its coaching staff before a contact period starts.

Morris was at his son Chandler's Thursday night game against Lone Star in Frisco, Texas.

"We have several coaches out on the road on Friday, and that's going back to building this program and taking it from the blueprint of where we were at Clemson and watching Dabo [Swinney] and his success and being able to go watch his two boys play and be out on the road recruiting Friday nights.

"A lot of programs do some things different on Fridays. Some take them to a movie. We've done all kinds of things. The main important thing is to get out and recruit when you've got an opportunity. We only have so many days to get out."

Arkansas center Hjalte Froholdt said North Texas will challenge the Razorbacks mentally with the style of blitzes it calls on defense.

"Whenever they start moving around, they do a tremendous job with that. They disguise it extremely well and they have very many looks and they manage to execute them all at a high rate. You don't see many busts."

The contract with North Texas calls for Arkansas to pay the Mean Green a $1 million guarantee, the Denton Record-Chronicle reported Thursday.

The Razorbacks offer larger paydays for Group of 5 teams compared to FCS opponents. Eastern Illinois' guarantee was $525,000 for the Razorbacks' season opener.

Reffett was Louisiana-Monroe's defensive coordinator in 2012 when the Warhawks rallied to beat the Razorbacks 34-31 in overtime in Little Rock.

North Texas is 0-9 against Arkansas, with the Razorbacks winning eight games by at least 12 points.

The one close game came in 1968, when the Razorbacks won 17-15. North Texas was led by defense tackle Joe Greene and quarterback Steve Ramsey. Both played in the NFL, and Greene became a Hall of Famer who helped the Pittsburgh Steelers win four Super Bowls.

Biagi works with kicker Cole Hedlund, the former Razorback who transferred to the Denton, Texas, school as a graduate student after losing the starting job to Connor Limpert in Week 3 last year.

"He has really embraced our culture and our players have embraced him," Littrell said. "He has done a good job of putting in the work and continued to grow with his technique. ... We are fortunate to have Cole."

"I don't think he is stressing too much about it," Fine said. "He will focus on his job and not think too much about it. But it's also a chance for him to go back and show what he can do. Hopefully, we can put him in great positions to show his talent and skills."

"I think more so you focus in on the system and practice against the looks you think you may see," Littrell said. "But in college football today, when you go out there on Saturday everybody makes adjustments. Everybody is going to do some different things.

"So the biggest thing you better do is understand your system. Understand your alignment and your technique and make sure you go out and do that to the best of your ability, because you're going to always see new things."

Austin Aune, who practiced with the Razorbacks last spring as a walk-on quarterback, has been imitating Arkansas' quarterbacks this week.

Aune, who transferred from Arkansas to North Texas this fall, is redshirting and working as a scout-team quarterback.

Aune, from Argyle, Texas, signed with TCU in 2012 but never enrolled there because the New York Yankees drafted him in the second round as a shortstop and paid him a $1 million signing bonus.

After the Yankees released him last year, Aune decided to give college football a shot, and now he'll get it at North Texas rather than Arkansas.