Innings up for grabs for Diamond Hogs 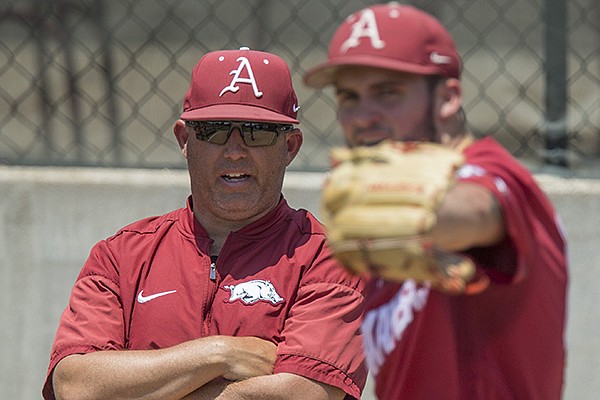 FAYETTEVILLE — Due to a combination of the Major League Baseball Draft, injuries and transfers, Arkansas must replace 430 innings pitched from the team that finished national runner-up earlier this year.

The turnover within the pitching staff has left the Razorbacks with a blank canvas this fall. There are some pieces that are evident — Isaiah Campbell will be in line to start on the weekend and Matt Cronin, the single-season saves record holder at Arkansas, is back as a closer — but the rest of the puzzle must be pieced together between now and the time the Diamond Hogs open the 2019 season against Eastern Illinois in February.

“Last year, we kind of knew we had Knight, Murphy, Campbell and Cronin — those were kind of the guys everyone looked to,” said Jacob Kostyshock, a junior right-hander. “The attitude in the locker room is that everyone is ready to step up and take a role.”

The Arkansas bullpen is an assortment of names known to fans, names possibly forgotten and names to be learned.

Those known include Kole Ramage and Caleb Bolden, regularly-used pitchers as freshmen in 2018, and the likes of Kostyshock, Zebulon Vermillion and Cody Scroggins, who were spot relievers a year ago but whose roles could be significantly increased.

Both saw jumps in their fastball velocity — Kostyshock 91-94 mph and Vermillion 90-95 mph — but what Arkansas pitching coach Wes Johnson was most pleased with was the development of their breaking pitches.

“If you peel back both of those guys’ summers, everyone is going to talk about how hard they were throwing, and that’s all cool and stuff, but they both got confidence in their breaking pitch,” Johnson said. “The breaking ball is different for each guy — Zeb’s is more of a cutter slider, and then Kosty’s is more of that traditional flat slider — but they had success this summer because they were able to spin the baseball.”

Vermillion and Kostyshock were on the Razorbacks’ postseason roster and traveled to the College World Series, but neither pitched in a game after April last season.

“I’ve said it for a long time: This isn’t a development league,” Johnson said, “meaning the SEC is real. There is not a game on the weekend where you can just go try a guy and if it doesn’t go well, it’ll be OK.

“So it’s not so much that you’re not pitching those guys as it is the other guys are just doing really well.”

Kostyshock and Vermillion were used heavily late last season in simulated scrimmages during practice that were designed to get pitchers work, but also to work on a pitch that a hitter might be struggling to see in a game.

Vermillion said his curveball progressed during those scrimmages.

“It was huge on making a statement for me, to prove that I was able to go into games,” Vermillion said. “So every time I threw in one of those scrimmages, it wasn’t because I was just getting the hitters ready; it was to prove to coaches that I can throw my off-speed, I can go into a game.”

Johnson said both pitchers developed good fastball command during those scrimmages over the second half of the season. Vermillion pitched so much in the simulated scrimmages and over the summer that he won’t pitch much, if any, during the fall practice season.

“Zeb needs a breather,” Johnson said. “Jacob is fine. He took two weeks off after the season and then went out. He’s starting for us right now in scrimmages. He’s got to go out and win a (starting) job, but that’s what we want him to do. Zeb will be more of a back end guy for us, closing and coming in right-on-right because his fastball velocity is really good, but his breaking ball got really good as well.”

Vermillion said he hopes to be used as the right-handed complement to Cronin, the hard-throwing lefty who recorded 14 saves a season ago. Johnson said Vermillion’s off-speed pitches are difficult for right-handers to pick up.

“It’s the best adrenaline rush in baseball, so that’s why I like it,” Vermillion said of closing.

Those possibly forgotten on this year’s staff are redshirt sophomore right-handers Kevin Kopps and Angus Denton. Kopps redshirted last season because of a Tommy John surgery he underwent last fall. Denton redshirted because he needed to get stronger.

Kopps was one of Arkansas’ best relief pitchers and was a spot starter in 2017. His cutter was arguably the best pitch on the team that year, almost unhittable the first time through the order.

“We’re taking it really slow with him,” Johnson said. “In a perfect world he has an opportunity to start. He’s looking really good right now, but like I say to everybody, the young man had surgery.

“We’re expecting big things out of him, but his role will be determined by a recovery standpoint and just how he bounces back.”

Denton, a submarine pitcher, was redshirted in 2018 so that he could add muscle and weight to his slender frame. It also allowed him to save a year of eligibility instead of be used minimally with so many pitchers in front of him.

“We’re expecting him to pitch on the weekends out of the bullpen,” Johnson said. “We need him to be able to control left-handed hitters. Last fall and spring, he was getting right-handers out really well, but there are a lot of good teams in our league and it seems like they’ve always got a bat sitting on the bench who is left-handed.

“In his first outing this fall, we stacked some left-handed hitters against him and he did really well.”

Those names new are the many freshmen on this team, a group that includes some well regarded recruits like left-handers Patrick Wicklander, Liam Henry and Steven Sanchez, and right-handers Jacob Burton, Connor McCullough and Connor Noland, the Arkansas quarterback who won’t join the baseball team until football season is finished.

Neither Johnson, Kostyshock nor Vermillion were prepared to single out a freshman who has stood out, but all indicated the group collectively has shown promise.

“The locker room has definitely evolved.”