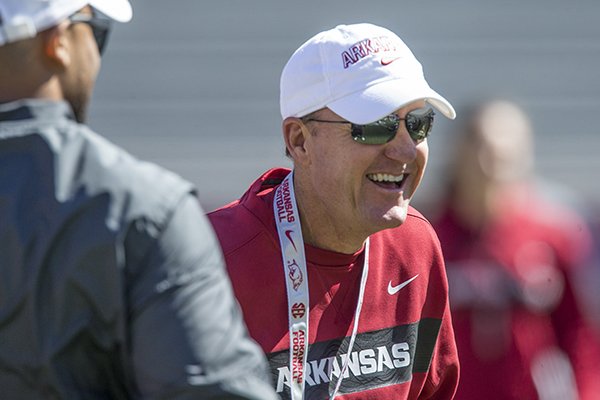 FAYETTEVILLE -- The University of Arkansas will open Reynolds Razorback Stadium today for wide-open viewing of the annual Red-White game at 3 p.m.

The Razorbacks' spring showcase, the first fully accessible session of spring for the public in the second year under Coach Chad Morris, will also air on ESPNU.

Noteworthy The Red-White game is open to the public and is free, following on the heels of the annual HogFest (noon to 2:30 p.m.) in Lot 44 (The Pit) at the Broyles Athletic Center. … This is spring workout No. 14. The 15th allowed practice of spring is scheduled to be a low-key, closed workout early next week. … The White offense won last year’s spring game 27-25 at War Memorial Stadium in Little Rock, with tight end Cheyenne O’Grady catching two touchdown passes.

The format for the game will be strictly offense versus defense, with a modified scoring system on one side of the ball. The scoring will be standard for the offense, but the defense will receive six points for a touchdown, three points for a turnover or a fourth-down stop, two points for a three-and-out series and one point for every tackle for loss or "sack" against the quarterbacks, who will be off limits for live tackling.

"It's just offense and defense," quarterback Ben Hicks said. "It's similar to what we've been doing ... on Saturdays. We're not going to split up into two teams. I don't think we have enough depth for that."

The weather forecast looks pretty good, with a 20 percent chance of rain about an hour into the game, though thunderstorms are predicted to be moving in at some point in Northwest Arkansas.

The Razorbacks are looking for their first good-weather spring game since 2016 after a major rainstorm moved them indoors to the Walker Pavilion in 2017 and freezing rain hampered the proceedings last year at War Memorial Stadium in Little Rock.

Morris said coordinators John Chavis and Joe Craddock would work the game from the sidelines rather than in the press box, which they occupied on game days in the fall.

"It'll be much like a controlled scrimmage, like we had last Saturday and the Saturday prior," Morris said. "It'll be a game setting, but it will be a lot of controlled [work], and there will be very little special teams. But we'll spot the ball in different areas on the field and get some situational stuff in."

Some of the Razorbacks' top skill players will be out or very limited. Tailbacks Rakeem Boyd and Devwah Whaley are unlikely to play, while Chase Hayden -- who has had a big spring -- probably will not be asked to take a lot of contact today.

Additionally, top tight end Cheyenne O'Grady is questionable after suffering a lower back issue last week, and sophomore receiver Mike Woods is out with a wrist injury.

On defense, middle linebacker De'Jon Harris is still recovering from foot surgery, and other veteran players might have limited roles.

Asked what he'd like the fans to see today, senior defensive tackle McTelvin Agim said with a laugh, "Hopefully a lot of me coaching."

Senior receiver Deon Stewart admitted feeling a little nostalgic while leaving the practice field Thursday after what he called the final "legit" spring practice of his career. He'd like the fans today to see the advances he thinks the offense has made through the spring.

"They haven't seen us this year, so it's exciting to get out there and show them all what we can do," said Stewart, who has been running at first-team wideout along with junior De'Vion Warren in the slot and freshman Trey Knox. "If you compared last spring to this spring ... that was our first year getting in the playbook, so I mean guys now are all familiar with the playbook so we can actually play fast instead of last year when we were focused on 'Oh, shoot, I messed up on that play.' A lot of us know what we're doing."

The offensive line would like to show some cohesiveness after suffering more injuries and ailments that have kept the top five in flux. Left tackle Colton Jackson, who underwent arthroscopic knee surgery in the last week, will be out, leaving junior-college transfer Myron Cunningham some key reps.

Perhaps the most anticipated matchups will feature the group of emerging receivers versus the younger defensive backs.

"Just to show our secondary is back there, no deep balls," Foucha said when asked what he was looking for in the Red-White game. "We have linebackers that are going to come up and tackle, so we want to show how much we have improved with holding our shell, staying deep, making sure we hide the post, making sure they don't know where we're blitzing from. I feel like we've grown and we're going to show that a lot this Saturday."