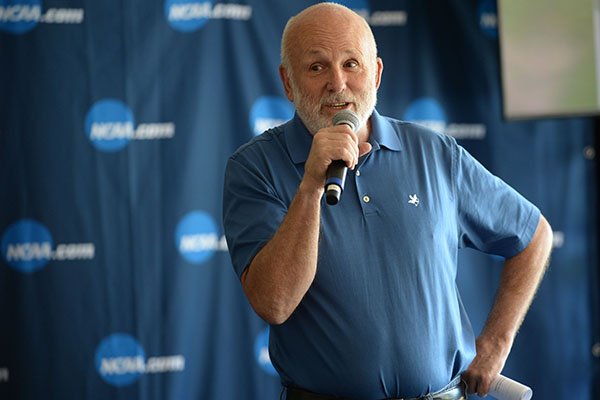 FAYETTEVILLE -- Golf fans who attend the men's and women's NCAA Championships in Northwest Arkansas next month might find it a blessing that their admission fees have been covered.

University of Arkansas Athletic Director Hunter Yurachek announced Tuesday at the Blessings Golf Club that John H. Tyson -- founder of the course that will host the championships May 16-29 -- will underwrite the cost for all patron tickets to the events through Tyson Foods and the Tyson family.

"If you want to come and attend this event, any day for the men and any day for the women, it is of no cost to you," Yurachek said. "It's going to be an unbelievable two weeks of golf. You can come, and it's not going to cost you anything."

The announcement was part of a news conference at the Blessings hosted by the Golf Channel's Lisa Cornwell, a former Razorback golfer. The event brought together Tyson, members of the Blessings staff, civic leaders in Northwest Arkansas, UA officials, UA golf coaches Brad McMakin and Shauna Taylor, and ex-Razorbacks and current professional golfers Stacy Lewis, Gaby Lopez and Austin Cook.

"I always had the dream of hosting a great event here," Tyson said. "To host an event of this magnitude is exciting. I believe it will test the young men and women and will identify the champion while still being fair."

The Blessings will be the first host site to offer complimentary tickets, according to a UA news release. Parking is also free, and patrons will be able to follow their favorite pairings on the actual course, Tyson said.

The Blessings hosted an NCAA men's regional in 2013, and preparation began not long after that to put together the successful bid to land the combined men's and women's championships this spring.

The undertaking will involve 500-plus volunteers; officials from the UA and the Blessings; convention and visitors bureaus from Fayetteville, Springdale, Rogers and Bentonville; the Northwest Arkansas Council; and other entities.

Richard Cromwell, general manager and chief operating officer of the Blessings, said a group including himself, UA senior administrators Chris Pohl and Matt Trantham, and others began honing in on the bid about four years ago.

"We all talked about this, and John [Tyson] gave us a little bit of a nudge about four years ago," Cromwell said, adding that the group went to NCAA Championships in Eugene, Ore.; at Rich Harvest Farms in suburban Chicago; and at Karsten Creek in Stillwater, Okla., the past few years.

"We asked every question we could ask, took pictures, interviewed people, and took all that information and started working on a bid and were eventually successful," Cromwell said.

The exposure the NCAA championships will bring to the state and region is incalculable, Yurachek added.

Taylor said the postseason preparation for her team has been underway.

McMakin said he'd like the pressure to remain on him while his team does its job trying to advance through an NCAA regional to qualify for the championships.

"Life is pressure," he said. "I think our team understands the situation and the importance of being here and competing."

Jay Allen, who is the tournament chairman of the LPGA Tour's NW Arkansas Championship, announced that the NCAA women's individual champion will receive a sponsor's exemption into this year's tournament in Rogers.