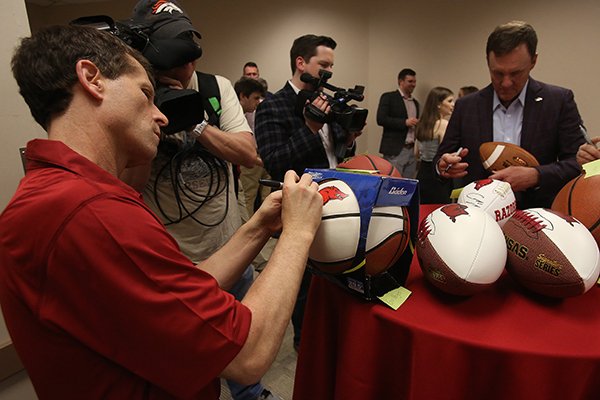 When it came to practicing the Hog call, the Musselman family turned to the University of Arkansas' football coach.

New men's basketball Coach Eric Musselman -- who was with football Coach Chad Morris on Wednesday at the Little Rock Razorback Club's State of the Hog fan event at Verizon Arena in North Little Rock -- said his children Matthew, Michael and Mariah watched Morris' Hog call on YouTube over the weekend to prepare for Monday's news conference at Walton Arena in Fayetteville.

"They were well-prepared," Musselman said. "We didn't google fans. We googled Coach Morris and wanted to try to get up to his standards. They practiced a lot, I can tell you that. There were a lot of Hog calls going on in Reno, Nevada, before getting on that plane, that's for sure."

What did Morris think of the Musselmans' Hog call Monday?

Musselman is looking forward to getting to know Morris more as he settles into his position.

"He's awesome," Musselman said of Morris. "I'm just trying to pick his brain and trying to learn from him. He's a great X-and-O guy. We have some common friends.

"I'm figuring out how he had such great success in recruiting and how we can implement some of the stuff he's done."

Morris calls Musselman a high-energy coach, similar to himself.

"He's very passionate," Morris said. "He comes from a coaching family and understands it. We're excited about the future with Coach Musselman and Razorback football and basketball."

"It was my first time seeing them live," Musselman said. "That was good. It's easy to watch film to form opinions. But when you're live, it always takes on a different animal as far as what you need and what positions are solidified and so forth."

Musselman had high praise for guard Isaiah Joe, who tied the SEC freshman record with 113 three-pointers in 2018-19.

"He's got such a beautiful stroke," Musselman said. "He's a better ballhandler than what I've seen on film. We want to continue to work on his individual skill and get him strong. But he's an incredible talent and an incredible young man as far as his attitude.

"We're really going to need his leadership. He got such great experience this year as a young guy. We need him to lead our ballclub."

When asked about his assistant coaching staff, Musselman said he hasn't made a decision. Melvin Watkins, Scotty Thurman and TJ Cleveland served under former coach Mike Anderson -- who was fired after eight seasons with the Razorbacks -- but are all in limbo.

"We've met with all of the assistant coaches, all three of them," Musselman said. "I had great conversations with them. They filled me in on a lot of holes that need to be filled in. We're just still figuring out what we're doing."

The Arkansas football team finished spring practice Saturday with the Red-White game. Morris, who is in his second year at Arkansas, believes the Razorbacks are a better football team after this spring than at any point in his tenure.

"We've got a long way to go, but we're better," said Morris, whose team was 2-10 in 2018. "We've got to keep developing the guys on our roster. The culture is stronger. You saw a lot of young guys out there making an impact, which is big.

"You've got a football team that understands what we're asking of them."

"He developed with his teammates," said Morris, who coached Hicks at SMU before arriving at Arkansas. "Ben took the ownership of the quarterback room and really brought the energy to it. He told me that he wanted to teach the guys who are going to be here longer than a year. He understands that, being a veteran guy.

"We're in a good position at quarterback."

have not yet been announced.