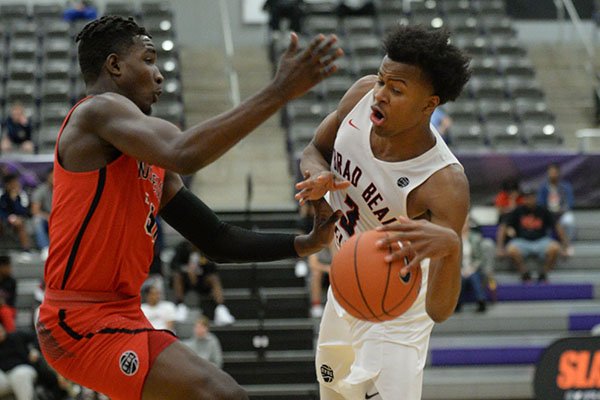 Moses Moody dribbles around a defender during an AAU game Friday, April 12, 2019, at Bulldog Arena in Fayetteville.

FAYETTEVILLE — One of the nation’s best 2020 prospects showed off his talent Friday night just a stone’s throw away from where Arkansas hoop fans hope the five-star prospect plays his college basketball.

The game was held at Fayetteville High, a couple of blocks from Arkansas’ Bud Walton Arena, where new Razorbacks head coach Eric Musselman has just started his tenure.

“I haven’t talked to him yet, but I look forward to building a relationship,” noted Moody, who is ranked as the 26th-best junior nationally by ESPN. “I was curious who they were going to hire, but when they did hire him I looked him up and checked out his past.”

Musselman, a former NBA head coach with Golden State and Sacramento, reached out to Moody’s father, Kareem, earlier this week to let him how big a piece of the Razorback future he sees the young star being.

Musselman, 110-34 in four years at Nevada, replaces Mike Anderson after he went 169-102 the last eight years at the helm of the Razorbacks.

“I was surprised,” Moody said. “I didn’t see that coming. But I hear Coach Musselman is a great coach, a good guy off the court personally, so I look forward to creating a relationship with him.”

Moody had a chance to see some of his former Arkansas high school standouts on the Woodz Elite team on Friday night.

Bradley Beal Elite has Saturday games at Springdale Parks and Recreation (formerly Next Level) at 3:15 p.m. and 6 p.m.

Woodz Elite 17-and-under team is scheduled to play two other pool games on Saturday at 11:30 a.m. and 3:15 p.m. at Springdale Parks and Recreation as well as Sunday morning at 9:15 a.m. at the same venue.

“There are a couple of schools that stay in contact more and just the depth of the conversation, that really want to know about me as a person,” Moody said. “I feel like they have more interest in just getting me on campus.

“The most interest is probably coming from Ohio State and Stanford. They stay in contact a lot. I have a couple of new schools coming in - Seton Hall and Kansas State.”

Moody is not in a big hurry to narrow down his list and actually would like to add more to it before doing so.

“I am looking for this new AAU season to be a big season and pick up a lot of new offers,” Moody said. “I will start narrowing it down after that, but I am still completely open.”

Montverde (22-2) missed an opportunity to win back-to-back GEICO national championships when it lost to LaPorte (Ind.) La Lumiere 74-73 in the semifinals of this year’s event in New York City.

Moody had nine points and four assists in that contest.

“It didn’t finish off like we wanted it to, but definitely it was a good year just picking up a lot of knowledge from (Montverde) Coach (Kevin) Boyle teaching us the game,” Moody said.

Moody went from being the best player on the floor during most of his games in Arkansas to being just one of the numerous elite players in practice and in games.

“It was definitely a big adjustment,” Moody said. “It was like five, five-star players. Everybody can play, so if you are not playing well, you can easily come out. You have to play defense and do every part of the game.”

That included playing against a lot of guys invited to play in the prestigious McDonald’s All-American game, something Moody would like to be a participant in next year.

“We played a lot of McDonald’s All-Americans, maybe half of them,” Moody said. “Getting out and playing against top competition was great.

“It is (a goal). I have to keep working on my game and elevate to the next level to get on the top stage.”

Moody will be the leader next season of a Montverde team that loses a lot of talent.

“We are losing four seniors, so that is definitely going to take a toll on us, but we do a good job of getting players in every year and I trust my coaching staff,” Moody said.

Moody was impressed with former Fort Smith Northside guard Isaiah Joe leading the SEC in 3-point percentage, breaking Arkansas’ freshman record for made 3-pointers in a single season and tying the SEC freshman mark with 113.

That was also the fourth-most 3-pointers in a single season by any college freshman in the history of the NCAA.

“I did get a chance to watch him play,” Moody said. “I wouldn’t say I was surprised. I have known Isaiah since we were little kids and he has been shooting like that even before the fourth grade, when my brother started playing with his team. I see him staying after practice, putting up the shots and definitely putting the work in.”