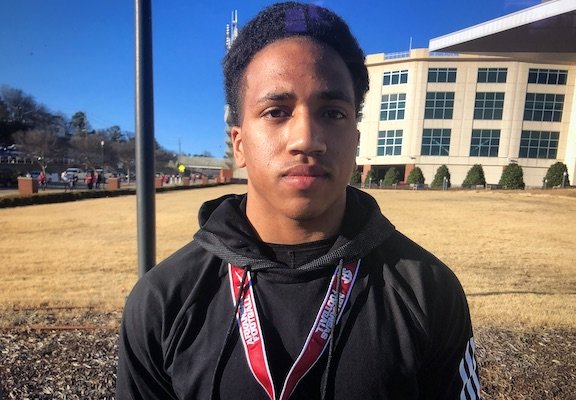 FAYETTEVILLE — Arkansas’ football program used two of its current big-play guys to try and help talk a potential one into being a future Razorback.

Oklahoma City tailback Dominic Richardson (6-1, 210) was hosted on his official visit this weekend by tailback Rakeem Boyd and freshman wide receiver Trey Knox, an early enrollee who showed off his ability in spring practice.

“It was great,” Richardson said of the visit to Fayetteville. “Great atmosphere. We did a lot. Rakeem and Trey…we just hung out and had a good time. They showed me around campus. The coaching staff is always outstanding. I loved it. It was good.”

Richardson, who rushed for a whopping 2,135 yards and 26 touchdowns last season, had made an unofficial trip to check out the Razorbacks last month.

Arkansas coach Chad Morris and his staff have made Richardson feel like he is a top recruit.

“They make me feel like I'm welcome, I'm home and I belong here, which I love a lot,” Richardson said. “The coaches are outstanding and they show a lot of love. The players are just outstanding, too, dedicated here, which makes me feel I'm supposed to be here as well.”

He has bonded with Arkansas running backs coach Jeff Traylor.

One of the highlights of the trip was the official recruits, coaches and some current Razorbacks getting together at Morris’ house.

“It was great,” Richardson said. “A lot of people there. Coach Morris has a nice house. We just sat in there talking, communicating about football and life itself. Getting to know each other. It was great and the food was good, too.”

Arkansas is one of the four top schools for Richardson.

“Definitely at the top of my list,” Richardson said of the Razorbacks. “I like TCU, Arkansas of course, Nebraska and Iowa State. Those are the top 4 right now.”

He does not have any other officials set up yet and could have a decision before too long.

If Richardson does indeed become a Razorbacks pledge, he will look to bring more Oklahoma prep stars with him.

"For sure, if I come here,” Richardson said. “A lot of other players want to play with me already. If I come I'm pretty sure I can get a handful."

Asked about goals for his senior season, Richardson was clear.

“Break records, which is obviously my goal and just finish off strong,” Richardson said. “Just stay humble and try to do it all."