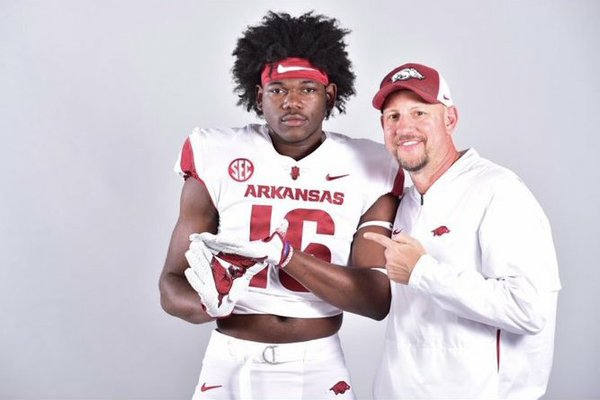 Tight end Allen Horace saw enough of Arkansas after his official visit to Fayetteville this weekend to know he wanted to commit to the Razorbacks.

“I’m trying to win the national championship here. We have everything here - the culture, the coaches and that beast Texas grit,” Horace said. “I wanna leave here the standard for Arkansas Razorback tight ends for the ones after me.”

He wants to make his hometown proud.

“I’m trying to put on for Crockett, Texas,” Horace said. “I want to leave here the best Allen Horace Jr. possible and I know I got the right people in my corner.”

Horace, who recorded 29 catches for 468 yards and 9 touchdowns as a junior, stood out for his school’s basketball team by averaging 16 points, 12.5 rebounds, 2.4 blocks and 1.1 steals per game.

He also made an unofficial visit to Fayetteville on March 9. Associate head coach and running backs coach Jeff Traylor is highly regarded in east Texas, where he coached Gilmer to a 175-26 record and three state championships. Traylor’s background helped Horace’s decision.

“Coach Traylor is family. He comes from where I come from and honestly no matter what we’re always going to be connected,” Horace said.

“Coach Lunney is like everything I need in a coach,” Horace said. “He’s going to take me to the levels I work for. He’s going to have me prepared and ready to go when my name is called. He’s my guy and he’s always got me in his corner.”

His pledge is Arkansas’ fifth for the 2020 class.