By: Chris Lee Special to the Democrat-Gazette
Published: Sunday, April 14, 2019 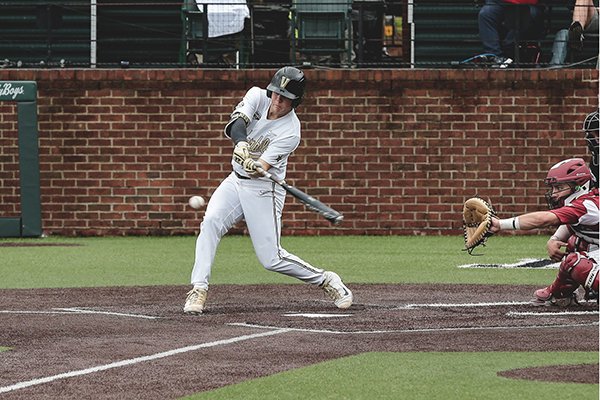 Vanderbilt's Stephen Scott swings during a game against Arkansas on Saturday, April 13, 2019, in Nashville, Tenn.

NASHVILLE, Tenn. -- A disastrous first inning set the tone for the University of Arkansas in a 12-2 loss to Vanderbilt at Hawkins Field on Saturday afternoon.

Commodores left fielder Stephen Scott bashed a first-inning grand slam, part of the seven runs Vanderbilt scored before the Razorbacks registered an out.

The first inning included a lot of self-inflicted woes for the Razorbacks.

"They put us away pretty quick."

Even Vanderbilt Coach Tim Corbin was surprised by the start.

"I don't know if you quite expect that on a Saturday, Friday, whenever. We got guys to reach base, then got the big hit by Scotty," Corbin said. "We had some things go our way, too, some favorable spaces on the field that allowed us to reach base."

Freshman starting pitcher Kumar Rocker dominated the Razorbacks. He struck out 7 in 7 innings while scattering 4, 3 of which came off the bat of Arkansas designated hitter Matt Goodheart.

Cooper Davis led off the game for Vanderbilt with a grounder deep in the hole to shortstop Casey Martin, who had no shot to get an out at first. Martin threw it anyway, and Davis wound up on second after the ball went into the dugout.

Vanderbilt shortstop Ethan Paul roped a single through second for another run. Then, catcher Philip Clarke bounced to first baseman Trevor Ezell and was safe when Noland was late to cover the bag.

It was the last hitter Noland faced with the score 2-0 and the bases loaded without an out.

"We already had [reliever Kole] Ramage getting hot," Van Horn said. "Connor's a freshman. He still hasn't proven to us that he can get out of a jam."

But Ramage was no better. He walked second baseman Harrison Ray before giving up Scott's home run to right.

The bright spots for Arkansas were relievers Elijah Trest, Marshall Denton and Liam Henry, who combined to strike out five over five scoreless innings.

"The game was already decided, so there wasn't a lot on the line, but you take your hat off to the young guys," Van Horn said. "That was good to see. They came in and threw the ball over the plate and competed hard."

The Razorbacks got their two runs in the eighth off Ethan Smith, highlighted by right fielder Heston Kjerstad's RBI single.

Arkansas has not decided upon a starting pitcher for today's game, which is scheduled for 1 p.m. Central. It may be junior right-hander Cody Scroggins (2-0, 3.13 ERA), who has made three SEC starts.

The Commodores may be without the .339-hitting Davis, who left in the third inning with a leg injury.

SHORT HOPS Vanderbilt may be without outfielder Cooper Davis, who left in the third inning of Saturday’s game with a leg injury. Davis is hitting .339 on the year.