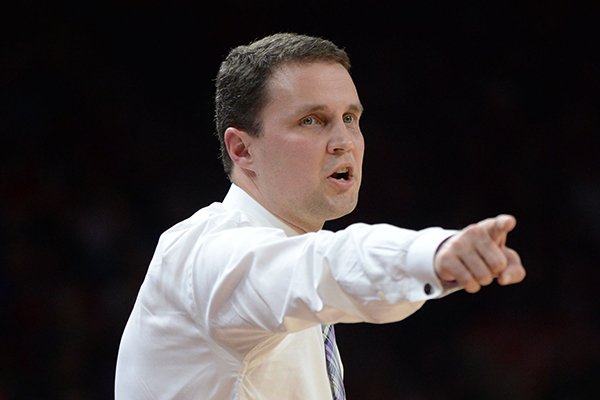 LSU coach Will Wade directs his players against Arkansas Friday, Jan. 11, 2019, during the first half of play in Bud Walton Arena in Fayetteville. Visit nwadg.com/photos to see more photographs from the game.

After 37 days, almost a week after the NCAA had crowned Virginia its newest basketball champion, LSU reinstated head basketball Coach Will Wade.

Wade was suspended for not meeting with LSU Athletic Director Joe Alleva on the advice of his then-attorney, Michael McGovern.

Of course, the reason Alleva wanted to meet with Wade was an FBI probe into college basketball when an alleged wiretap picked up Wade saying he had made a “strong a** offer,’ to a recruit.

It could possibly sound like someone was cheating, but that’s not why he was suspended. He was suspended for refusing to meet with his boss.

Understand that LSU basketball is nothing but a pimple on an elephant’s behind. Its main purpose is to not do anything that can hurt or deter from the primary passion of football.

Which is why the football facilities are state of the art, and the basketball arena, named after the late great Pete Maravich, is somewhere between pathetic and pitiful. It is the worst in the SEC.

In itself that might raise a red flag as to how Wade’s first recruiting class included 4-star guard Tremont Waters from West Haven, Conn. That class ranked No. 17 in the nation. Last year’s class jumped to No. 4 and included 5-star players Naz Reid from Asbury Park, N.J., and Emmitt Williams of Orlando, Fla.

It also included Javonte Smart, supposedly the 4-star recruit Wade was referring to, but how does a player from Baton Rouge end up being the one who gets you investigated?

Anyway, at LSU basketball is not really a high priority.

So suspending the head coach the day before the team played, and won the SEC championship because he was following his attorney’s advice was news, but only because head football Coach Ed Orgeron was out of the office that day.

Smart was cleared to play in the NCAA Tournament, which Wade watched at home — presumably with the sound off.

The NCAA selection committee didn’t punish LSU, making the Tigers a No. 3 seed, and they knocked off Yale and Maryland before losing to Michigan State, who made the Final Four but was beaten by Texas Tech.

If Wade had been strolling the sidelines, would the Tigers have beaten the Spartans? Maybe. Without him we know what happened.

During the NCAA Tournament, Wade released a statement asking to be reinstated and that he loves LSU.

That fell on football ears, although it was the next day when Smart was reinstated.

Wade made his best move on April 4 when he got rid of the New York lawyer and went with Steven Thompson from the Chicago firm of Nixon Peabody.

Thompson has experience with the NCAA. He represented Bruce Pearl when he was fired at Tennessee and currently represents Arizona’s Sean Miller, who like Wade is on the list to testify in the bribery trial because of the FBI probe.

Just nine days before Wade’s reinstatement, federal prosecutors filed a motion asking a federal court to prevent him and Miller from testifying in next week’s bribery trial.

Apparently the motion will be accepted, and everyone in Baton Rouge can go back to talking about how to beat Alabama in Tuscaloosa on Nov. 9.