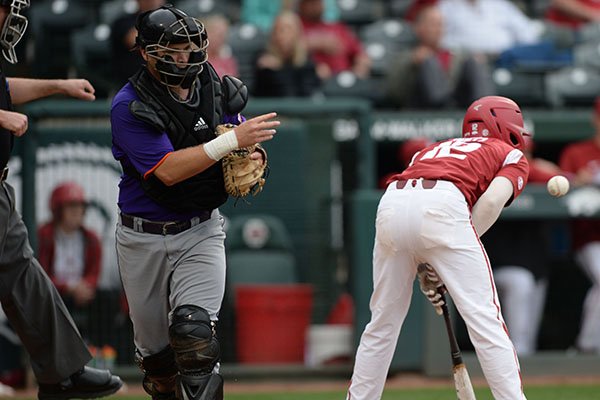 Arkansas catcher Casey Opitz (right) reacts after striking out with a runner in scoring position Wednesday, April 24, 2019, to end the seventh inning against Northwestern State at Baum-Walker Stadium in Fayetteville.

Smith had homers in the third, fifth and ninth innings. He finished the game with 7 RBI. Northwestern State split the midweek series after the Razorbacks' 19-2 victory on Tuesday.

Smith's two-run home run against Arkansas closer Matt Cronin in the ninth inning extended the Demons' lead to 10-7. Northwestern State had broken a 7-7 tie on Lenni Kunert's one-out RBI double against reliever Liam Henry in the top of the eighth.

Tyler Pigott retired Arkansas' Dominic Fletcher, Heston Kjerstad and Jack Kenley in order in the ninth inning to earn his second save.

Northwestern State jumped to an early 1-0 lead against Arkansas starter Marshall Denton, but Fletcher hit a grand slam with no outs in the bottom of the inning to put the Razorbacks ahead 4-1.

The Demons (24-16) battled back to tie the game 4-4 on Smith's first home run - a two-run shot to right-center field in the third inning.

Smith homered again in the fifth inning to cap a three-run inning against Arkansas reliever Elijah Trest that gave the Demons a 7-4 lead.

Arkansas tied the game in the bottom of the fifth on a two-run triple by Kenley and a sacrifice fly by Jacob Nesbit.

The Razorbacks (31-11) stranded eight base runners and committed two errors.

Pigott got Fletcher, Kjerstad and Kenley in order to get the win and a split of the two-game series with the Razorbacks (31-11).

The Demons move to 24-16 with the win, which was powered by Tyler Smith's three homers and 7 RBI.

Arkansas hosts Tennessee in a three-game series that begins on Friday.

Arkansas brought in Matt Cronin to face Tyler Smith, who had already hit a pair of two-run homers early in the game.

Smith took Cronin deep over the right field wall for his third two-run blast of the day. He also has a sacrifice fly and thus seven RBIs today.

Casey Martin ripped a two-out double that brought Matt Goodheart to the plate with go-ahead run.

Northwestern State has brought in lefty Tyler Pigott to face Goodheart, who flew out to center.

Northwestern State, who took a 19-2 loss to Arkansas on Tuesday night, takes its third lead of the day when Henry walked Hilton Brown, he moved up on a wild pitch and came across plate on Austin Stegall's double just inside the third base bag.

Razorback head coach Dave Van Horn pulled Henry in favor of Jacob Burton, who pitched last night in the ninth inning, which officially did not happen because of the game being called due to rain.

Burton got Marshall Skinner to ground out to short and fanned Laurent Fontenot to leave Stegall at third.

Heston Kjerstad led off the bottom of the seventh with a double off new reliever David Hodo and moved to third on Jack Kenley's ground out.

Hodo then fanned both Jacob Nesbit and Casey Opitz to leave Kjersatd stranded at third.

Arkansas brought in lefty Liam Henry to relieve Taylor with two outs in the seventh to face Tyler Smith, who had already hit two homers today.

Henry got Smith to ground out to second as the game remains deadlocked at the 7th inning stretch.

Trevor Ezell led off with a walk, his fourth time on base today in as many at-bats today with two hits and two bases on balls, against Austin Reich, the third pitcher of the day for the Demons.

But Reich then retired Casey Martin, Matt Goodheart and Dominic Fletcher to keep Ezell at first and the game tied.

Arkansas reliever Collin Taylor issued a two-out walk to Marshall Skinner, but got Laurent Fontenot to ground out to end the threat.

Arkansas cut it to 7-6 when Jack Kenley tripled home Dominic Fletcher and Heston Kjerstad, who had both signaled.

The Razorbacks then tied the game on Jacob Nesbit's sacrifice fly

Trest walked both Sam Taylor and Caleb Ricca with one one and Taylor raced to third on a wild pitch that didn't bounce that far away from new Arkansas catcher Casey Opitz.

Trest fanned Jeffrey Elkins, but then balked home a run to give the Demons a 5-4 lead.

Tyler Smith then blasted his second two-run homer of the day, an opposite field swat and his seventh of the season.

Elijah Trest sent Norhwestern State down 1-2-3 and Arkansas threaten in the bottom of the fourth when Trevor Ezell singled and raced to third on Casey Martin's infield single and an errotr. Graham got out of the jam by whiffing Matt Goodheart.

Graham set the Razorbacks down 1-2-3 in the third with the Demons continuing to switch third baseman Sam Taylor and second baseman Hilton Brown to have Taylor on the side of where the left or right handed hitter is likely to pull. Jacob Nesbit's deep drive to right came up just short of being a homer.

Elijah Trest now in to pitch for Arkansas in the top of the fourth.

Larson Fontenot singled leading off the inning, moved up on a ground out in which third baseball Jack Kenley made a fantastic play and raced home on Caleb Ricca's single.

Ricca stole second and went to third on an errant throw.

Tyler Smith then tied the game on a homer over the right field fence off Denton that included an impressive bat flip.

The bottom of the second had a second replay review in as many innings after Trevor Ezell singled and was called out stealing second. He signaled to the dugout that he was safe and that was ultimately correct. Matt Goodheart followed with a walk, but Graham fanned Fletcher to get out of the jam unscathed.

Denton needs just six pitches to get through the second inning.

After Jerry Maddox walked the first three batters he faced, Dominic Fletcher lined a grand slam over the right center field fence. It is Arkansas' second slam of this home stand and its fourth of the season.

Payton Graham came on to get the final two outs of the inning.

Denton gave up two hits in the top of the first, a leadoff single to Sam Taylor and a double to Jeffrey Elkins. Caleb Ricca, who reached on a fielder's choice and went to third on Elkins' double, scored on Tyler Smith's sacrifice fly that Razorback left fielder' Christian Franklin caught in foul territory.

The rain has moved out of Fayetteville. It is still cloudy, but the teams should be able to play this game without much - if any - interruption this afternoon.

Arkansas is going with its usual starting line up with the exception of Zack Plunkett catching in place of Casey Opitz.

The Razorbacks are starting righty Marshall Denton (1-0, 3.50) on the mound. It is his fourth start this season.