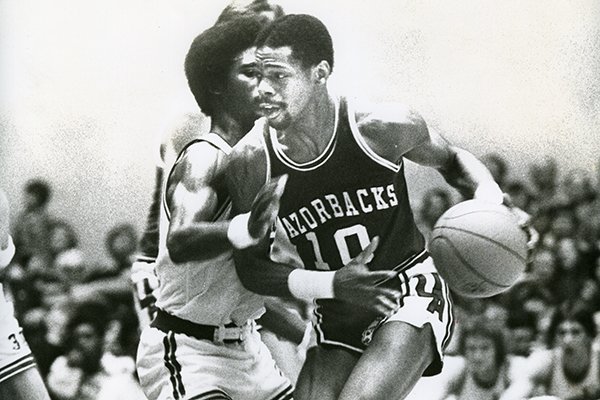 Brewer, who was selected by Portland with the seventh pick in the 1978 NBA draft (one pick behind Indiana State junior Larry Bird), played eight years in the NBA, including the 1981-82 season in Cleveland under the late Bill Musselman.

“His dad coached me when I was at Cleveland,” Brewer said. “He was one of those young kids that was always around the game. He was in the office as well as in the gym with his dad. I have been knowing him for a long time.

“He has turned out to be a great, great coach. He is a motivator, a developer and he has got the experience that these kids really need.”

Brewer, who was able to take in an Arkansas practice this week along with fellow former Razorbacks players Sidney Moncrief and Ronnie Brewer, is excited about the hire.

Musselman was 110-34 at Nevada over four years and also served as head coach of both the Golden State and Sacramento franchises.

He takes over for new St. John’s coach Mike Anderson, who was 169-102 in eight seasons at Arkansas and made three NCAA Tournaments as well as two NIT appearances.

Brewer, who was the NBA’s Rookie of the Year in 1978-79, believes Musselman’s NBA experience will help in recruiting.

“It is amazing, especially at the collegiate level,” Brewer said. “Any kid that plays the game, you have aspirations of playing at the highest level in the NBA. He has been there, done that and knows what they need to do to get there.

“He also has the connections for them to get there and it is a blessing for these kids to have someone to guide you and direct them in that journey and they just have got to take advantage of it.”

Brewer is happy with the way Musselman has rallied the troops.

“I am excited about it because he is excited about it,” Brewer said. “He is putting into their minds that they are good enough to get there because that is what he is used to doing.

“As fans, that is what we are looking for - a person who has been in the game, knows what needs to be done to get that and I think that is what these kids deserve.”

Brewer expects to see a hard-charging Arkansas team on the floor next season.

Brewer also talked about how his former Razorbacks coach Eddie Sutton was passed over again for induction into the Basketball Hall of Fame.

“We that have played up under him are very disappointed,” Brewer said. “We are still very positive about it happening, but it hasn’t and I am still trying to figure out the reasons why. He has been successful. His record speaks for itself.”

Sutton, who is in poor health, was elected to the College Basketball Hall of Fame in 2011, but has not been inducted into the more prestigious Hall of Fame located in Springfield, Mass.

“You look at other people getting in and he has done more than them,” Brewer said. “He is wonderful, has done so many great things. To be a Hall of Famer, you also have to have put people in the pros and he’s done that, and also molded young men and watched them become great men.

“If you ask those people, we would not have been able to become who we are without him.”