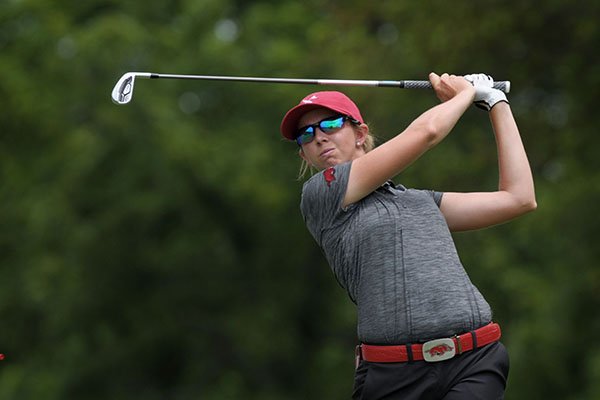 Former Arkansas golfer Summar Roachell hits from the No. 3 tee box during the local qualifier for the LPGA Walmart NW Arkansas Championship on Monday, June 19, 2017, in Rogers.

After spending a roller-coaster fall trying to play her way onto the grandest stage of women's professional golf, Roachell, 24, is back in El Dorado this weekend with full-fledged status on the Symetra Tour, having missed earning her LPGA Tour card in the final qualifier.

Roachell, a four-time Class 7A state champion at Conway, won $558 for finishing in 58th place in last year's Shootout in September after missing the cut in the 2017 event. After finishing Q-Series, the third and final stage of LPGA qualifying, Roachell said she got a jump on things this spring going into her first full professional season.

"I started working with a trainer in Florida, and we came up with a fitness routine that would help me be prepared for the long stretches," said Roachell, who played collegiately at the University of Arkansas from 2013-17. "I also started working with a health and wellness coach at a nutrition club, and I think those two aspects are really big when you're on the road for seven, eight, nine weeks at a time.

"A combination of those two things, taking some time off and then having some time to work with my coach on a few of the things that we saw at Q School that I needed to work on to be competitive out here on the Symetra, just having those months to grind it out and hopefully make some good strides out here were important."

Roachell finished her initial stage of Q School in Palm Springs, Calif., outside the cut line, but based off the status of others ahead of her, she was able to get into Stage II in Sarasota, Fla. With only 25 golfers advancing to Q-Series, Roachell finished tied for 20th. Two days later, she began practicing for eight grueling rounds in Pinehurst, N.C.

A total of 40 LPGA cards were up for grabs in the 100-player field, with Roachell falling short of her ultimate goal. She settled on full-time Symetra Tour status as a consolation prize.

"It was long. It was hard. It was mentally very draining," Roachell said of the Pinehurst experience. "I think the hardest part was just coming off the second stage and turning around and putting everything into the third stage again that quickly. Especially when you get to that point and you know how important it is and know they're giving away 40 LPGA cards, so there's a lot more added pressure then any other tournament.

"It was an absolute grind both mentally and physically. Those courses [Pinehurst 6 and 7] never really let up."

Joining Roachell for today's first-round 12:41 p.m. tee time will be Brenda Gonzalez (Central Arkansas) and Elise Bradley, 25, of Mandeville, La. Except for playing in her home state last week, Bradley -- a two-time Louisiana Women's Amateur champion -- said the El Dorado Shootout is the closest Symetra Tour event to her.

"My mom came up and caddied for me last year, but this year they'll be in France," said Bradley, whose first Symetra Tour event was 2017 in El Dorado, a five-hour drive from Mandeville. "I can't blame her. The change in the schedule messed things up. This is my third year here, so I stay with the same host family. They'll be out here, so it's similar to a home experience."

The event was moved from the fall to the start of the season to allow Mystic Creek to break ground on a new clubhouse.

"I believe [Mystic Creek] requested the change because they wanted to get started and can be done by the time the event comes around next fall," Symetra Tour media official Zach Sepanik said. "Moved it up to have basically a year and a half to have it ready for next year's event. It gives them another five or six months."