Morris: Offense in search of consistency; QB race on schedule 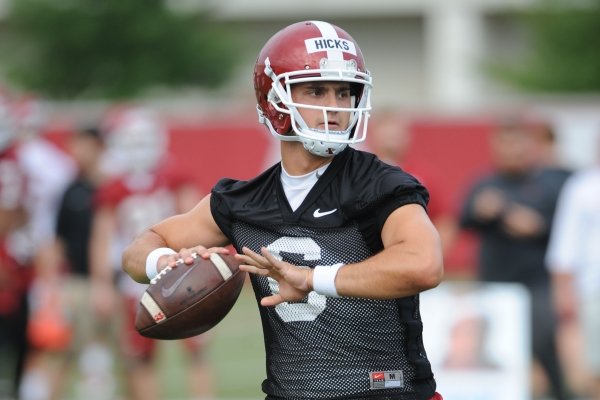 FAYETTEVILLE — Chad Morris likes where Arkansas stands with the opening day of full pads coming on Wednesday and the first scrimmage of the fall on the horizon.

However, through four days of practice, it's fairly evident the offensive side of the ball is a step behind the defense. The unit is well ahead of where it was at this juncture last year, but it hasn't been as consistent as Morris and his staff would like.

On Monday, transfer quarterback Ben Hicks was intercepted by De'Jon Harris on the second play of the day and freshman Jalen Catalon picked off John Stephen Jones moments later. There were three more turnovers on Tuesday, but Morris did not say who was responsible for each giveaway.

"Really what we want to see is consistency," he said. "We want to see the mistakes that were made in practice not being made again on Saturday. That’s really what we’re after - guys making plays, protecting the football.

"We have to protect the football offensively."

Despite the poor throws that led to interceptions over the last two days, the quarterback race is right on schedule, according to Morris. Saturday's scrimmage will be important for the whole room and the first big test of the preseason for Hicks, Nick Starkel, who continues to take second-team reps, and freshman KJ Jefferson.

Morris has been pleased with the competition thus far.

"We’re going in and doing a lot of good-on-good situational work out here," he said. "We’re putting the quarterbacks with different groups so they don’t just stay with one group, the first group. They may be working with the second group or the third group to see how they move those guys around.

"I think the ball jumps out of their hands. I've been very impressed with all of them, and their decision making is so much better than it was a year ago."

Offensive lineman Myron Cunningham, who worked primarily on the left side of the line in the spring and began getting reps at right tackle on Monday in Noah Gatlin's absence, said Hicks and Starkel both have a good grasp of the offense, but have different on-field personalities.

Jordan Jones, a veteran receiver from Smackover, Ark., added that the quarterback situation is a step up from last fall when Ty Storey and Cole Kelley battled for the starting job.

"The quarterbacks have been great. They all look great," said Jones, whose lone touchdown grab in 2018 came in the team's season opener. "I don't really have a preference who goes in. They can both sling it, and KJ can sling it, too."

Cheyenne O'Grady, the team's returning leader in receptions, receiving yards and touchdowns from a season ago, has not been working with Arkansas' first-team offense alongside Hicks the last two days. Once he meets the standard set by the coaching staff, Morris added, he will again run with the 1s.

"That’s kind of where we’re at with C.J. C.J. is a senior," he said. "C.J. has got to decide if this is exactly what he wants to do. Our standard is not going to change. He’s one of the best football players in the country and we’re going to treat him that way. So we’re going to see how he responds."

Morris later said all of the "great players" he's coached throughout his career want coaches to expect more of them on a daily basis and hold them accountable.

"(O'Grady will) respond. He always does. He's done it the last couple of days."