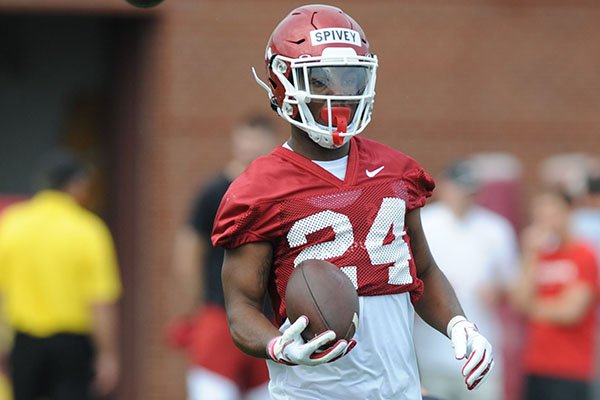 Loyalty and his mother’s approval played big roles in running back A’Montae Spivey’s decision to sign with the University of Arkansas.

In March 2018, the Hogs were the first SEC school to offer a scholarship to Spivey. After his commitment to Arkansas that summer, the Razorbacks continued to recruit him hard, led by associate head coach and running backs coach Jeff Traylor.

“They were my first SEC offer, and then throughout the whole way we talked,” Spivey said. “Coach Traylor and I bonded along with the others on the staff. We all hit it off. They did an amazing job of recruiting me.”

Spivey, 6-1, 208 pounds, of Phenix City, Ala., also had scholarship offers from LSU, Purdue, Cincinnati and others at the time of his pledge to the Hogs. He added offers from Ole Miss, Missouri and others after his commitment.

The Rebels offered him in November, and he made an official visit to Oxford about two weeks before signing day in February.

A'Montae Spivey At a Glance

NOTEWORTHY Opelika-Auburn News Offensive Player of the Year. … Led Central High School to a 14-0 record and the Alabama Class 7A state title for the first time since 1993 as a senior. … Participated in the 2018 Alabama vs. Mississippi All-Star Game. … ESPN’s No. 65 running back and No. 31 prospect in Alabama.

Arkansas made a strong statement to Spivey and his family when the entire offensive staff made an in-home visit Jan. 14. That visit was followed up by a visit from Coach Chad Morris, offensive coordinator Joe Craddock and Traylor.

“It was me being faithful to the guys that were there for me,” Spivey said of Arkansas. “Loyalty was a big thing, and those guys stood by me when nobody else was there. So I wanted to show them that same loyalty and join the team and try and make a difference.”

His mother, Lateisha Floyd, was pro-Arkansas during the recruiting process.

“My mom was a big part of my decision, too,” Spivey said. “Everybody’s mom is a big part in what they do. She really loved those guys. She trusts them with me.”

Traylor hasn’t disappointed Floyd since he son arrived on campus.

“From Day One, Coach Traylor said, ‘What you see is what you get,’ ” Floyd said. “I can say that is very true. Coach Traylor genuinely loves his boys. I can still say that even after he signed until now. I can pick up my phone and call coach and he will answer. Coach sends me texts to let me know how he’s doing in class and how he’s adjusting to college life.

“As a mom, your biggest fear is that what a coach is telling you is just hot air to get your kid to come to their school. I can say that isn’t the case with Arkansas’ coaches.”

Floyd is taking online classes from Troy University in pursuit of a degree in global business management while also working a full-time job.

“My mom has always been the rock in my life,” Spivey said. “She went back to school a couple years ago, but she still provided for us through everything. Through the hard times, she was at all my games. She’s a special woman.”

Seeing his mother work to be a year away from earning her degree inspires Spivey.

“My mom would be doing homework at the dinner table at 10-11 o’clock,” he said. “That just pushed me more to do the things I needed to do to live my dream so she can live a better life.”

Growing up watching schools such as Auburn, Alabama Ole Miss and Arkansas created a desire to play in the SEC.

“It’s been a dream since … I was five,” Spivey said. “Watching Darren McFadden running down the field, and Cam Newton throwing the ball. It’s a dream come true.”

Some fans feared last season’s 2-10 record might prompt the Hogs’ commitments to look elsewhere, but Spivey said it came down to him trusting in Morris’ vision for the program.

“You have to trust the coaches,” Spivey said. “I believe in Coach Morris. What he did at Clemson and SMU, it holds weight. I think we can turn it around this year. I think we’ll be in a bowl game.”

Spivey rushed 183 times for 1,363 yards and 19 touchdowns while having 13 catches for 166 yards as a senior. He led Central High School to a 14-0 record and the Alabama Class 7A title. He had 74 carries for 994 yards and 14 touchdowns while splitting time with his older brother and Mississippi Valley State signee Jamaar Spivey as a junior.

“He’s got a lot of power, he has great speed,” Central Coach Jamey Dubose said. “He has tremendous hands when coming out of the backfield. He runs really good routes.”

Dubose said Spivey’s vision is one of his greatest assets.

“He can see it out the front side,” Dubose said. “If he needs to cut to the back side, he knows when to explode.”

Spivey will be a great teammate at Arkansas, Dubose said.

Freshmen often struggle with day-to-day duties after entering college, but not Spivey.

“My mom has been preparing me since I was like 12,” Spivey said. “Doing laundry is just another part of life. I’m capable of living on my own.”

Floyd has no doubt Arkansas was a good choice.

“When I FaceTimed my son and saw that big smile, and he told me, ‘Momma, I’m gonna be straight,’ ” Floyd said, “I knew we had made the right decision choosing Arkansas.”