Hogs getting more reps thanks to two-field work 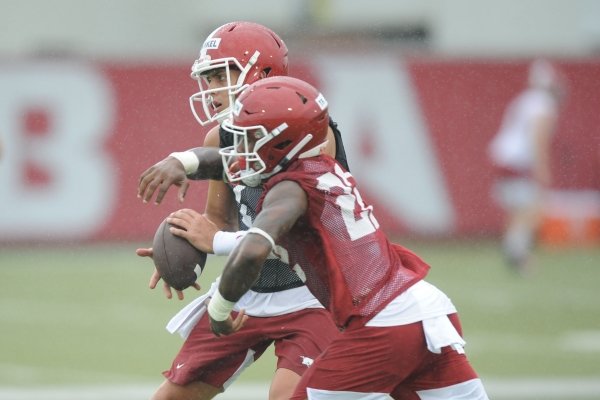 Arkansas quarterback Nick Starkel (left) fakes a handoff to running back Trelon Smith Saturday, Aug. 3, 2019, during practice at the university practice field in Fayetteville. Visit nwad.com/photos to see more photographs from the practice.

FAYETTEVILLE -- In the interest of utilizing a top-25 signing class and keeping the 110-man roster hopping in camp, University of Arkansas Coach Chad Morris seized upon a novel idea this summer.

Instead of running one huddle during team and 7-on-7 periods at practice, why not break the offense and defense into two groups and get double the action in the same time frame?

The Razorbacks have implemented the two-field tango through eight training camp practices, and Morris and his coaching staff are sold on the concept.

"I would say this," Morris said after Saturday's 175-play scrimmage. "It'll be something that I'll do from now on."

So far, the quarterback pairings have been Ben Hicks and John Stephen Jones on one field, Nick Starkel and KJ Jefferson on the other, with Jack Lindsey rotating between the two. The rest of the offensive position groups are split in half, as is the offensive staff.

The same holds true for the defense.

The groups also move back and forth between the natural grass and the artificial turf fields outside Walker Pavilion.

"Split fields does a great job giving a lot of guys a lot of reps and getting some experience in some guys," senior defensive tackle T.J. Smith said.

"It's paying off because we're getting a lot of reps," Craddock said Saturday. "Guys that weren't [in the top few groups] if this was last year, they probably wouldn't have gotten more than one or two snaps maybe all practice. And now they're getting 25, 30, 40 reps in a live scrimmage type of situation.

"So I think it's definitely developing our young guys, even though some may redshirt. At least they're getting the shot to show us what they can do. There's not going to be any, 'Well, coach, I didn't have a chance to show you what I can do.' ... All of them are going to get plenty of reps and plenty of opportunities to show us what they can do to get on the bus and make the travel squad."

Prior to the new practice concept, young players thought to be in line for redshirting might have taken very limited snaps during camp. The current signing class has talent throughout and they'll all have more practice snaps on their resume once in-season practice begins.

"You get to see the reps from the younger guys," senior linebacker De'Jon "Scoota" Harris said. "Because if we go on one field, the threes and fours probably won't get that many reps because there would be just the ones and the twos.

"So split fields is actually benefiting the team. You can see the younger guys progressing and earning their reps instead of just sitting on the sideline and not getting none at all."

Enhanced depth on the offensive line might have been the primary motivation for the split squads. The Razorbacks had only 10 healthy offensive linemen, sometimes eight scholarship linemen, for parts of last season.

Now there are 20 offensive linemen on the roster and 19 of them can actively participate with tackle Noah Gatlin lost for the year.

Instead of 10 or 12 of them actively participating in team periods, with the core seven or eight guys taking a large amount of reps, they all get action.

"Once camp is over, you don't have time to get the young guys reps," right tackle Dalton Wagner said. "You have to get it in camp. Split fields is honestly a great idea.

"The competition it brings has guys moving up and down the depth chart every day. Guys get fired and hired on the spot for jumping offsides or missing a block or anything. You are fired on the spot."

The same principle holds true for other position groups, where more looks yields more opportunity to crack the two deep and make the travel roster.

"It's competitive," Smith said. "Guys know that guys want to make the plane."

Defensive end Dorian Gerald said there are health benefits from the two-field system.

"I think it definitely gets guys in better shape because we're getting a lot more reps than we used to. A lot," Gerald said. "We're getting double the reps that we usually get, so I think conditioning-wise it does good for the team."

The two-field tactic isn't without drawbacks. Morris and coordinators Craddock and John Chavis can see only half the team work in real time. Veterans like Harris, defensive tackle McTelvin "Sosa" Agim, safety Kam Curl, Hicks, receiver Deon Stewart, center Ty Clary and others who are like coaches on the field can only impart instant advice to half the squad.

Teaching and making corrections off video, always a key component to progress, become even more important with the new system.

Morris is clearly sold on the idea.

"If we continue this on, which we will, and we get into the season, we only have a certain window of opportunity to get these guys ready. I know the guys that are going to step out there on that field on a Saturday and perform. You know Scoota, you know Sosa, you know those guys are going to go, but ... what if we need some of these guys behind them? Now there's this window of opportunity for us to get this team better."