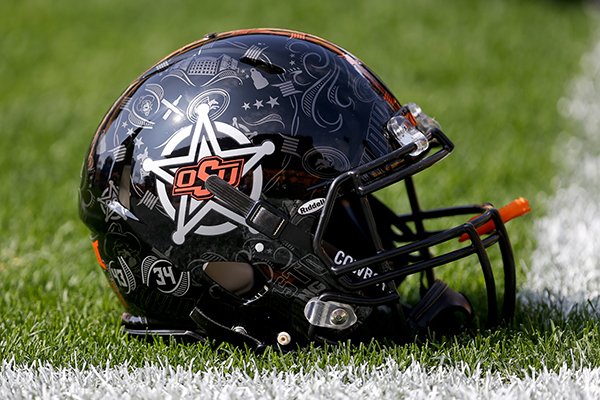 An Oklahoma State football helmet is on the turf during warmups before an NCAA football game against Pittsburgh, Saturday, Sept. 16, 2017, in Pittsburgh. (AP Photo/Keith Srakocic)

FAYETTEVILLE — Arkansas' future football series at Oklahoma State has been extended by two games, bringing the total of future scheduled games between the teams to four.

Last October, Arkansas and Oklahoma State announced a series that will begin Sept. 7, 2024, in Stillwater. The Cowboys are scheduled to play a return game in Fayetteville on Sept. 11, 2027.

The campuses are separated by about 180 miles.

The teams were simultaneous members of the Southwest Conference from 1915 until the Cowboys left in 1925 for what would become the Missouri Valley Conference.

The Razorbacks and Cowboys played every season between 1962-80, typically at War Memorial Stadium in Little Rock and often in the season opener for both teams. The teams played nine times between 1950-60.

Arkansas has won 22 of the past 27 meetings between the programs.

Arkansas has played nine times in Stillwater, but only twice since 1951, and Oklahoma State has not played in Fayetteville since 1945.

The 2033 matchup - to be played in 14 years - is the farthest in advance scheduled for Arkansas, which now has 25 nonconference games scheduled beyond the upcoming season.

An open records request by WholeHogSports.com also uncovered a game scheduled between Arkansas and Florida International on Nov. 18, 2023, in Fayetteville. The Razorbacks last played FIU in 2007 - a 58-10 Arkansas victory on Homecoming.

FIU is coached by Butch Davis, who played on the Razorbacks' freshman team in 1970. After suffering a career-ending knee injury the following year, Davis began his coaching career as a volunteer assistant on Frank Broyles' Arkansas staff.