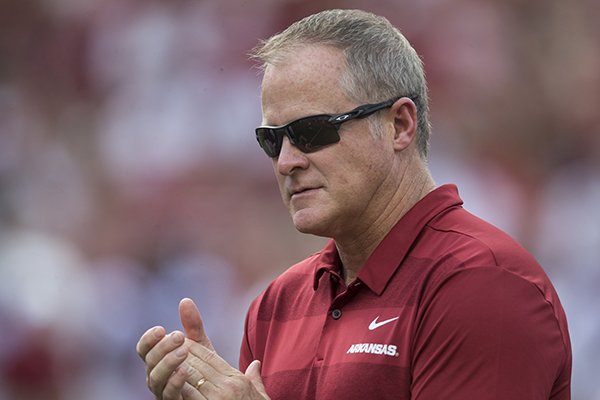 FORT SMITH — There is no truth to the rumor that the Razorbacks will release their 2040 football schedule later this week, but Arkansas athletic director Hunter Yurachek does admit he is working ahead quite a bit these days.

He addressed the issue Tuesday evening at a gathering on the #OneRazorback Road Show.

“We have got a requirement in the SEC to schedule a Power 5 game every season and many schools are scheduling those games out 10-15 years,” Yurachek said. “There is a limited number of those games because many of the Power 5 conferences play nine conference games, so you really have to do that much further in advance than I am even comfortable with to make sure I am taking care of the University of Arkansas.

“So the opportunity to play a Utah, an Oklahoma State, Notre Dame and Texas in the future, those are great games for our program.”

“The Oklahoma State game is a great game for us,” Yurachek said. “Their fans can come to Fayetteville, our fans can go to Stillwater. That makes a great deal of regional sense for us from that standpoint.”

There are home games with Texas and Rice in 2021 and one in 2023 with Florida International, currently coached by Butch Davis, a former Razorback.

The Razorbacks should be announcing their final 2022 nonconference foe soon to go along with home games against Missouri State and Liberty, and a road game at BYU.

Yurachek admitted that tickets sales are what you might think coming off of a 2-10 season.

“Tickets sales reflect us being 2-10 last year, candidly,” Yurachek said. “We are down a little bit, but we are doing some things around the game day atmosphere.

“We want the game to be a true entertainment so that when fans come that first game, they’ll experience that, experience some of the new things that are in our stadium such as expanded Wi-Fi, some of the augmented reality things we are going to do on the video board and try to make it a special gameday experience that people want to be a part of that.”

Yurachek is very aware that college programs are in a battle with living rooms for football fans.

“Our attention spans collectively are not very long and we have to really create an entertainment value in and around your football game to get people to come into town.

“It is not an inexpensive thing to get people to come into your town for a football game. It is not an inexpensive endeavor for someone that is not from Northwest Arkansas when you have to drive across the state, get a hotel room that has a two-night minimum, eat at restaurants and tailgate and things of that nature. We have got to make sure there is a value there.”

Yurachek got a chance to look over Arkansas’ new grass surface at Donald W. Reynolds Razorback Stadium on Monday.

“I walked across it yesterday morning,” Yurachek said. “It doesn’t move when you walk across it. It's a great addition to that stadium. We talk about being The Natural State, but it is really cool.”