All-SEC will be hard for Arkansas skill players to obtain 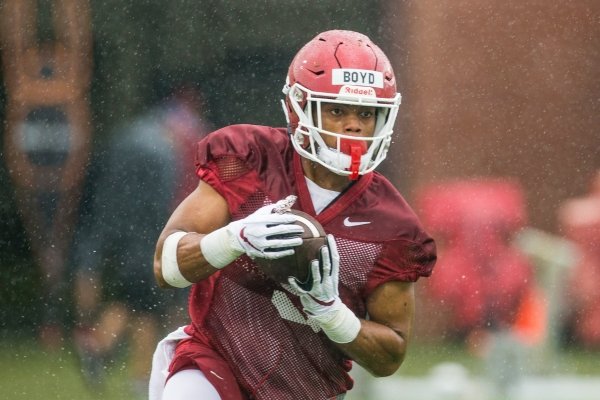 LITTLE ROCK — High-quality competition at the ballot box and on the field all but guarantee former wide receiver Cobi Hamilton will remain the answer to a trivia question for at least one more year.

“The last Razorback quarterback, running back or wide receiver to make the All-SEC First Team selected by both coaches and The Associated Press is?”

Since then, 11 of the 14 schools have had at least one representative among the quarterbacks, running backs and wide receivers chosen by coaches and media. Three times, the selections have been identical; in the other three years, only one player has been different.

Not surprisingly, Alabama led the way with eight while other Western Division members Auburn and Texas A&M landed four each, and Ole Miss was next with three.

Along with the Razorbacks, Florida and Tennessee were shut out.

Measured against 2018’s dismal stats, improvement of Arkansas’ offense is virtually unavoidable, which, in turn, means some individuals will record notable numbers. Remember, the Razorbacks were 13th in the SEC in average yards per game rushing at 143.4 and pass completion percentage at less than 55 percent. Ten teams completed better than 59 percent.

With a healthy Rakeem Boyd and Devwah Whaley and an improved offensive line, the Razorbacks will running the ball more effectively. And, whether graduate transfers Ben Hicks or Nick Starkel or freshman K.J. Jefferson win the quarterback competition, the completion percentage will go up with help from freshman wide receivers including Trey Knox, Treylon Burks, TQ Jackson and Shamar Nash.

However, enthusiasm for Arkansas personnel is tamped down by the slew of SEC playmakers, a list that goes far beyond Alabama wide receiver Jerry Jeudy and quarterback Tua Tagovailoa— first teamers on more than one preseason All-American team.

In the SEC, the quarterback position is so deep the Arkansas starter could be productive and efficient and never get a mention in the voting.

• Tagovailoa: Completed better than 60 percent in nine regular-season games last year, plus he was good on 46-of-61 when the Crimson Tide defeated Oklahoma and lost to Clemson in the College Football Playoff. However, four of his six interceptions occurred in the SEC title game vs. Georgia and the CFP championship.

• Fromm: Completed 60 percent or better in 12 of 14 games last season and was good on 67.4 percent of 307 attempts overall. Like Tagovailoa, he threw only six interceptions. And, in 15 games as a freshman, his completion percentage was 62.2 with only seven interceptions.

• Burrow: The Ohio State transfer was inconsistent early last year, completing 57 percent or less in eight of the first nine games. But, his percentage was 65.8 or better in the last four games when the Tigers beat Arkansas, Rice and Central Florida, and lost to Texas A&M in seven overtimes. He should benefit from the Tigers’ move to the spread.

All are eligible to record impressive numbers with a variety of receivers in tow.

Alabama alone has Jeudy, plus Henry Ruggs III and Jaylen Waddle, and the touchdown-to-catch ratio is eye-catching — 14 touchdowns from Jeudy’s 68 catches and 11 of 46 for Ruggs. Waddle’s average per catch of 18.8 yards on 45 receptions is also impressive.

Considering the talented quarterbacks and even significant improvement in the Razorbacks’ passing game is unlikely to produce attention-getting stats, the conclusion is that Boyd may be the Arkansas player with the best chance to make the All-SEC first team at one of the designated positions.

Still, odds are against him.

Run or pass, major improvement in the offensive line is a must and far from certain.

• Defenses in the SEC, starting with Auburn, Alabama, Texas A&M and LSU.

• Playing for a team that wins big is an important part of the equation and the Razorbacks will be hard-pressed to win two SEC contests.

A junior college transfer, Boyd was a backup until the fourth game of 2018 when Whaley suffered a concussion. Two weeks later, Boyd started a streak of three consecutive 100-yard rushing performances vs. SEC opponents with 102 on 15 carries against Alabama — the first Razorback to top 100 yards vs. the Crimson Tide since Darren McFadden in 2007.

Mostly because of an ankle injury, he only carried 29 times in the final three games and he missed spring practice after undergoing shoulder surgery.

If healthy all season, he should top 1,000 yards. Still, for Boyd and other Arkansas playmakers, the All-SEC first team is on hold until at least 2020.