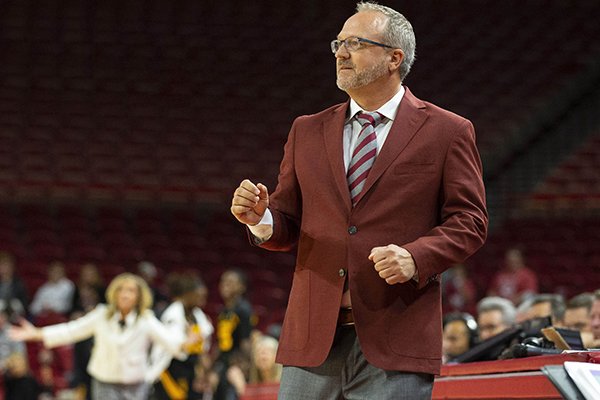 Arkansas coach Mike Neighbors watches during a game against Arizona State on Sunday, Nov. 18, 2018, in Fayetteville.

Arkansas will play two games in the Bahamas Hoopfest as well, taking on Fordham on Nov. 29 and Wisconsin the following day. The trip is the program's first outside of the United States since 2015-16 when it played in San Juan, Puerto Rico.

“We’ll be playing two good teams - one NCAA Tournament team and one that’s a Power 5 down there,” Neighbors said Tuesday during an event in Fort Smith. “We always try to take a tournament outside the continuous United States, if we can, during the non-years that we play overseas during the offseason."

The final five out-of-conference games in December will be played in state. Arkansas is scheduled to host Kansas State in the Big 12/SEC Challenge on Dec. 7, host Tulsa on Dec. 11, Northwestern State on Dec. 21 and Tennessee-Martin on Dec. 29.

The Razorbacks will also play Arkansas-Little Rock on Dec. 21 in Verizon Arena in North Little Rock in the second meeting between the programs and first since Arkansas defeated the Trojans 74-54 on Dec. 9, 1977, in Little Rock.

“Seeing Bud Walton Arena come alive last March for the WNIT run made it a high priority to ensure our amazing fans have an opportunity to keep the momentum building with a quality home schedule this season,” Neighbors said in a release. “Knowing the challenges the SEC presents at the turn of the year, it’s always vital to have your team prepared for a variety of styles of play. Lastly, you have to consider what is good for the entire league to maximize potential for NCAA at-large bids come Selection Monday.

"The five NCAA Tournament teams we will face this early will put us in position to again be considered for play beyond the SEC Tournament.”