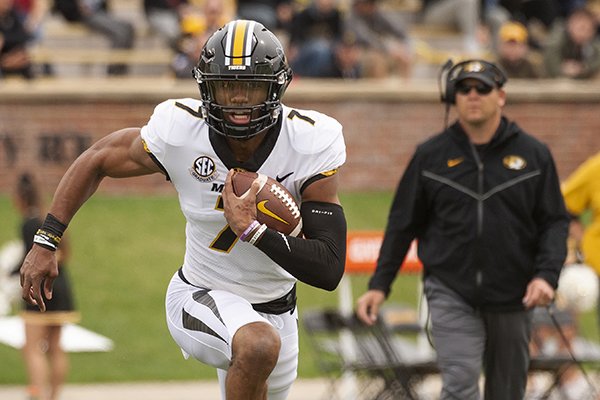 As in there are a lot more graduate transfer quarterbacks hoping to lead SEC offenses.

After LSU’s Joe Burrow was the only graduate transfer to start at quarterback in the SEC in 2018, the conference could have as many as five when this season opens.

Burrow, who transferred to LSU from Ohio State, is back to lead LSU as a senior after passing for 2,894 yards and 16 touchdowns, and rushing for 399 yards and 7 touchdowns last season.

There are seven graduate transfer quarterbacks on SEC teams this season, including two at Arkansas. Joe Burrow is a returning starter at LSU. The other six are in their first season at new schools. Here is a rundown:

Kelly Bryant: Missouri/Clemson, Sr., Started every game in 2017 when Clemson made CFP

Sawyer Smith: Kentucky/Troy, Jr., Should be quality backup for Wildcats

The University of Arkansas, Mississippi State, Missouri and Vanderbilt also could have graduate transfers as starting quarterbacks.

Senior Ben Hicks, from SMU, and junior Nick Starkel, from Texas A&M, are competing for the Razorbacks’ job.

As soon as Kelly Bryant transferred from Clemson to Missouri, he was named the Tigers’ starting quarterback by Coach Barry Odom.

Tommy Stevens transferred to Mississippi State from Penn State, where he played for Bulldogs Coach Joe Moorhead, who was the Nittany Lions’ offensive coordinator from 2016-17.

Kentucky also added graduate transfer quarterback Sawyer Smith from Troy. Smith, who has two seasons of eligibility remaining, is expected to be a backup to junior Terry Wilson, a returning starter.

“Guys want to play,” Burrow said of the increasing number of transfer quarterbacks. “If you can go somewhere else that allows you to have a better opportunity to play, I think you need to take it.

“I think that’s good for college football, because more guys get to showcase their talents. There are some really good players out there who might be stuck behind someone who’s an NFL guy. They go somewhere else and light it up.”

The Sporting News ranked the top 20 transfer quarterbacks going into this season, and the list included 10 who either left or joined SEC teams.

“I think the grad transfer rule is great,” Hicks said. “It’s great for guys that have stuck at their university and busted their tail to graduate and given that university all they have, and are still able to check out other options and do something else.”

Hicks said it’s exciting to be part of a large group of SEC graduate transfer quarterbacks.

“I think it’s made this league more fun,” he said. “More interesting, too.”

Starkel said he expects the trend of quarterbacks transferring to continue.

“It really has just turned into free agency,” Starkel said. “I think it’s good for me, obviously. It’s good for some guys going to better situations for them, and it hurts some other guys, I guess.

“It’s going to be interesting this year in the SEC, for sure.”

Bryant started every game for Clemson in 2017 when the Tigers won the Atlantic Coast Conference championship and made the College Football Playoff — where they lost to Alabama and Hurts in the semifinals — and started the first four games last season before losing his start job to freshman Trevor Lawrence.

Lawrence went on to lead Clemson to the national championship — beating Alabama and new starting quarterback Tua Tagovailoa in the title game — after Bryant quit the team after four games so he could redshirt and start at another school as a graduate transfer.

“It depends on your situation,” Bryant said of transferring. “If you feel the need to go somewhere else that’s going to benefit you and put you in a position to be successful, you’ve got take care of yourself at the end of the day. I mean, it’s a team sport, but you’ve got to do what’s best for you, too.

“I feel like it’s a great rule for guys. A lot of people don’t like the rule, but that’s just how it is today.”

“When you recruit a quarterback, it’s different than recruiting someone else,” Morris said. “These guys want to play, and they want to be the man. They want to impact the game.

“It may not happen at the place that they’re at, they have that [transfer] option, and that’s great for our student-athletes.

“So I don’t think that’s going to go away. I know it’s not going to go away at that position. I also believe that as you recruit and as you sign classes that there will always be that tendency to make sure you’ve got spots available for guys that may come into your program through the transfer market.”

Hicks started 33 games at SMU and is the Mustangs’ career leader with 9,081 passing yards and 71 touchdowns. He started nine of 13 games last season when Sonny Dykes replaced Morris as SMU’s coach.

“I just thought it was time for a new learning experience,” Hicks said of transferring to Arkansas. “Just to continue to grow as a person and as a football player. I think to get out of my comfort zone was huge for me.

“I got comfortable at SMU. I’d been there so long I got a little complacent. I just needed a different perspective, a different opportunity to make myself uncomfortable and continue to grow.”

Starkel was the Aggies’ starter in the 2017 opener at UCLA, but he suffered an ankle injury and Kellen Mond replaced him.

After Starkel was cleared to play again that season, he started the final four games, including the Belk Bowl against Wake Forest when he passed for 499 yards.

Mond regained the starting job last season under new Aggies Coach Jumbo Fisher. Starkel passed for 169 yards in four games off the bench and decided he needed a fresh start with an opportunity to start again.

“That’s just the game of football, honestly,” Starkel said. “Every quarterback room from the New England Patriots down to a peewee team, that’s just how it is.

Fisher praised Starkel at SEC media days and said he understands the motivation of quarterbacks who transfer.

“You have to manage that position differently because it’s the one position where basically one guy plays,” Fisher said. “You get a backlog or they see someone that wins a job, they’re going to transfer.

“I think that will always be the game going forward. I truly do. And I can understand why a guy does that. If he loses his job and he’s going forward and he has one or two years to play, I mean, I get it.

“That’s why I think you’re constantly recruiting quarterbacks. Because you don’t ever know how many of those guys are going to leave.”

“I feel great,” Bryant said of getting a second chance at Missouri. “I can’t thank God enough for the timing of the rule, because if it was two years ago, I don’t know what would have been the outcome as far as my situation.

“I think Tommy is a kid with a lot of physical tools,” Moorhead said. “Strong arm. He can really run.

“He’s accustomed to the system, so he’s going to understand it for the most part coming in. I think he brings a lot of talent to the position, and I think the competition is going to be an exciting one.

Neal started 32 games at Ball State and passed for 7,393 yards and 46 touchdowns.

“In this day and age, you see a lot of programs stack up the quarterback position,” Vanderbilt Coach Derek Mason said. “Guys look up and they say, ‘Well, maybe I need to look at a different opportunity.’

“They got their undergraduate degree, and now they feel like they want to take their talents elsewhere. I’m not against that.”

Smith played in 13 games last season for Troy and started the final seven. He passed for 1,669 yards and 14 touchdowns, and rushed for 191 yards. He gives Kentucky a capable backup with Hoak’s decision to transfer to Ohio State.

The Razorbacks play Kentucky, LSU, Mississippi State and Missouri, so they could end up facing four of the SEC’s graduate transfer quarterbacks.

“I’ve talked to some young guys who have kind of been thinking about [transferring],” Burrow said. “What I always tell them is when you’re making the decision, make sure you don’t just wake up one day — maybe the practice didn’t go well the day before — you go, ‘Oh, screw these guys. I’m leaving.’

“I think you need to take a step back and look at the entirety of the situation and make it like a business decision and not an emotional decision.”

Bryant said recruiting visits as a graduate transfer are different than the process as a high school player.

“I think it’s more stressful as a graduate transfer, because you don’t have three to five years to play anymore,” Bryant said. “You only have one year — maybe two years — to get it right.

“You pretty much have to get it right. I wanted to make sure all my boxes were checked before I made this decision.”

Burrow said it’s tough to become a team leader — a natural role for a quarterback — in a short period of time as a graduate transfer.

“What I really tried to do is just keep my mouth shut and let my work do the talking until people saw that,” Burrow said. “Then I was able to speak up a little bit more.

“It’s like when you’re a freshman and go into a new place. Keep your mouth shut, and if you show people how hard you work, then you can start being a leader.”

Bryant showed his leadership skills in late January when Missouri was hit with NCAA sanctions for academic fraud — including a bowl ban — and he addressed his new teammates.

Missouri’s players — including Bryant — could have transferred elsewhere and had immediate eligibility. But no player left Missouri.

“If you’re going to be here, make sure we’re all committed,” Bryant said of his message to the team. “There is not going to be one foot in and one foot out.

“We had to make sure as seniors that we’re bringing the young guys up and keeping everybody positive. We’re not trying to let outside noise come between this team.”

Burrow was asked about a player deciding to transfer for his own best interests, but also being a good teammate at the same time.

“People that are successful in the sport of football are almost always good teammates,” Burrow said. “I think that’s a universal truth.

“I think that the coaches’ goal should be to create an environment that breeds people wanting to stay inside the program. But if a player wants to leave for a better opportunity, why is it bad for them to go chase their dream?”