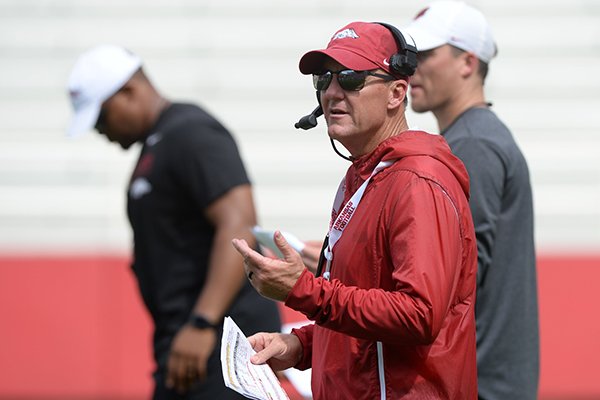 FAYETTEVILLE -- The University of Arkansas closed its training camp with Saturday's Beanie Bowl at Reynolds Razorback Stadium, with junior Nick Starkel taking the first reps at quarterback with the starting unit.

A few hundred fans filed into Razorback Stadium on a warm, muggy afternoon for the Beanie Bowl, which was held exactly one week from the kickoff time for the season opener against Portland State.

The Razorbacks, wearing their new "McFadden Era" throwback red jerseys, ran through a scripted mock game for about 70 minutes, including some special teams work and pre-designed plays such as a targeting call, a safety, an interception and fumble, and a mock fight between center Ty Clary and defensive tackle Nick Fulwider.

The light walk-through came on the day after camp essentially ended Friday with practice No. 19 on the fields outside Walker Pavilion.

[Video not showing up above? Click here to watch » https://www.youtube.com/watch?v=I7HqGtS-f-s]

"I think we've had a great camp," Coach Chad Morris said Thursday. "I think it's been a very mentally and physically challenging camp for this football team.

"I think that they have responded the way we were hoping they would respond, especially with us splitting fields and guys getting reps. There's been a whole lot of reps that we've been able to coach, correct."

The Razorbacks will start their normal game-week routine with a light practice tonight, followed by their weekly news conference Monday with Morris and coordinators John Chavis and Joe Craddock. In six days, Arkansas will try to start the recovery from a 2-10 season by hosting the Vikings at 3 p.m. at Razorback Stadium.

If the starting 11 on offense in the Beanie Bowl holds true for the opener, the Razorbacks will trot out a completely different set of starters than they did in last year's season opener against Eastern Illinois.

"I think it just shows where we're going," offensive coordinator Joe Craddock said. "It shows that we're making the strides we need to make."

Morris and Craddock have not named a starting quarterback yet. Starkel took his reps Saturday with the first unit, while senior transfer Ben Hicks opened with the second unit but sprinkled in some snaps with the ones, including a kneel down in the victory formation.

The Razorbacks suffered a couple of major injuries in camp by losing right tackle Noah Gatlin and starting wide receiver Deon Stewart for the season due to knee surgeries.

A large handful of other starters and contributors missed chunks of camp due to lesser injuries or ailments.

"It's been tough, to be honest with you, in terms of injuries," Craddock said. "I know we've had, I don't know the exact number, but I feel like it has been like six guys that we thought were going to start that have all been missing at a critical time.

"But hopefully we'll get some of those guys back soon and get back healthy and be ready to go. But when we had those guys out there, I felt pretty good about where we were."

The defensive side of the ball had fewer injuries, and none with players who are projected to miss major parts of the season.

Chavis, the defensive coordinator, liked what he saw in camp, but he recognizes the Razorbacks have to keep pushing.

"It's been a hard grind in this fall camp, and I think that's what this football team needed, and I think they've responded well," Chavis said. "We're not nearly where we need to be. There's no question about that.

Morris said the level of physicality in camp led to the decision in the final scrimmage Wednesday to pull out a lot of the players who coaches believe had established themselves.

"The guys that we know that are proven players, we pulled them out a little bit early ... to let some of the young guys get some reps. I think it's been a really good camp."