State of the Hogs: Watching the grass grow 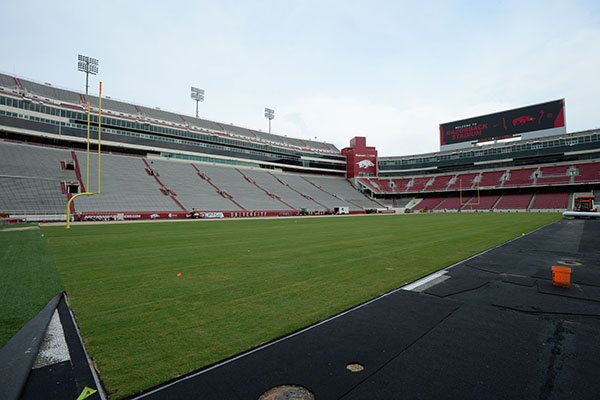 There is nothing like watching grass grow. It might bring great satisfaction, perhaps giddiness in some settings if it's a special strain.

With the return to natural grass at Reynolds Razorback Stadium this fall, it led to some great memories about the way my father, the late Orville Henry, watched grass grow during my early days in Little Rock. It all clicked when I noted the specific strain of turf: Tahoma 31. The name is not relevant. It’s that it has a name.

First in Meadowcliff on Westmont Circle, then later when we moved to Fair Park Boulevard, my dad had the best yards in Little Rock. He loved to watch the grass grow. It was never just plain old common Bermuda, the stuff that exists everywhere in the South.

My dad had special strains of Bermuda, begged for from golf course superintendents in Little Rock or turf specialists from as far away as Georgia. He sometimes got a new strain from the agriculture specialists at the University of Arkansas. He’d haul it in the back of the family station wagon from anywhere.

Through visits with Jack Stephens, there would be strains of azaleas in our yard to match Augusta National Golf Club. Stephens was my dad’s great friend and would later become chairman at Augusta National.

My brother Butch, six years older than me, said at some point our dad actually interacted with the U.S. Department of Agriculture’s Turf Grass Research facility in Tifton, Ga.

“A contact there took him under his wing,” Butch said. “We knew that dad would leave the Masters on Monday and drive four hours to Tifton. More often than not, they’d fill his trunk with samples of the newest strains.

“When he’d get back to Little Rock, he’d cut the chunks into two-inch strips with a butcher knife, and the sprigs would quickly grow in our warm wet April climate.”

My dad’s hobby was his yard. That dovetailed nicely with his evening hours as sports editor at the Arkansas Gazette. He grew roses and had a famous iris bed with various strains. Through his USDA contacts, he’d have strains of both Bermuda and zoysia that had not yet hit the market.

But more than anything else, he grew wonderful lawns. It was common punishment for my dad to sentence his four boys to a whole day of kneeling with a knife, cutting out crabgrass. He wanted to see the taproot of each plant.

Our backyard had sections of Bermuda 319 for play, then Bermuda 412. It was gorgeous and cared for in a grand way.

Now to the good stuff: The backyard was planted with a special strain of Bermuda suitable for a putting green. Cups were actually set in it, although we never owned a mower that could cut the height low enough. He priced them but never thought it affordable.

There were some great neighborhood football games on that “golf green.” We sometimes played knee football. You could never leave your knees. It was smash-mouth stuff, but it’s hard to really hit someone too hard when you are on your knees.

The highlight of the Westmont Circle yard came in 1964. Everyone knows about the great Arkansas victory over No. 1 Texas at Austin that was the springboard for the lone national championship for the Razorbacks.

My mother, Carolyn, often traveled with my father to Arkansas games. She would have time to kill afterward as he wrote his long columns. There were several hours of writing after Arkansas won 14-13 in Austin. The Longhorns failed on a two-point conversion in the closing minutes.

It was one of the great games played between two great coaches: Arkansas’ Frank Broyles and Texas’ Darrell Royal. That’s the big one Frank won. Of course, the big one that Darrell won in 1969 will be 50 years old on Dec. 6.

I prefer to think more about the 1964 game. That was the night I listened in the middle of the living room floor then ran outside to do what everyone else did all over Arkansas that night: jump in a car (parked or moving) and honk the horn.

That was probably about the time my mom went to dinner at the Mexican place a few blocks away from Memorial Stadium. After El Rancho, she came back to the stadium and sat in the bleachers where she could see the press box. As she watched my father still writing, a spectacular idea hit.

My mother went to the spot where the Hogs snuffed the two-point conversion and went to her knees with her nail file. She dug out by the roots several chunks of Bermuda sod and carefully wrapped them in tissue. Then she went to the water fountain and soaked them. Into her purse went sod from Memorial Stadium.

When my dad came into the stands to find her, he quickly noted her purse would not close. The turf was spotted, and they embraced. She knew my dad. It would be transplanted the next afternoon when they returned to Westmont Circle.

I’d tell you the exact address, but it might cause a stir if someone tried to “dig” around. I’m sure that grass has survived all these years. I know where the heart of that “strain” of Bermuda started in the northwest corner of the back yard. I can still see my father moving the sprinkler as he cared for it. I was only 10, but it’s a great memory.

I’d ask him what he was doing, and he’d say, “I’m watching the grass grow.”

I was too young to understand why there were different strains across the backyard, but either me, or one of my three brothers would delight him by asking, “What’s what, Dad? Where is the 319, 412 — and the Texas turf?”