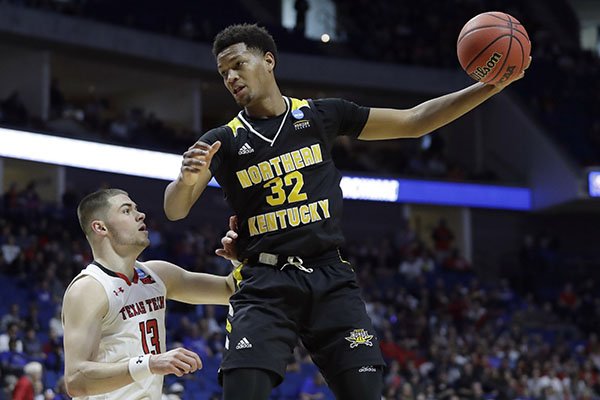 Northern Kentucky's Dantez Walton (32) reaches for a rebound as Texas Tech's Matt Mooney (13) defends during the first half of a first round men's college basketball game in the NCAA Tournament Friday, March 22, 2019, in Tulsa, Okla. (AP Photo/Jeff Roberson)

FAYETTEVILLE — Arkansas will host Valparaiso and Northern Kentucky in the upcoming basketball season.

A date has not been given for the home game against Northern Kentucky, but NKU coach Darrin Horn confirmed the game during a business luncheon Wednesday in Newport, Ky., according to a tweet from Don Owen, a reporter for Northern Kentucky Tribune.

Northern Kentucky was previously revealed by the Twitter account @TheD1Docket as one of six teams in the College Hoops Roadshow, a multi-site, on-campus exempt event that will also include Arkansas home games against Montana, Texas Southern and South Dakota. According to NCAA scheduling rules for exempt events, the Arkansas-NKU game would need to be played by Nov. 30.

Valpo is coming off a 15-18 season in which the Crusaders went 7-11 in the Missouri Valley Conference. Valpo is losing its leading scorer from last season, but returns senior guard/forward Ryan Fazekas (11.8 points per game) and sophomore guard Javon Freeman-Liberty (11 points per game).

Matt Lottich is in his fifth season as head coach of the Crusaders.

Horn, who previously was head coach at South Carolina for four seasons until 2012, is entering his first season as head coach at Northern Kentucky. The Norse are coming off a 26-9 season in which they won the Horizon League and lost to Texas Tech in the first round of the NCAA Tournament.

Arkansas has not released its schedule, but the Razorbacks' 13 nonconference opponents have been learned through other schedule releases or reports.