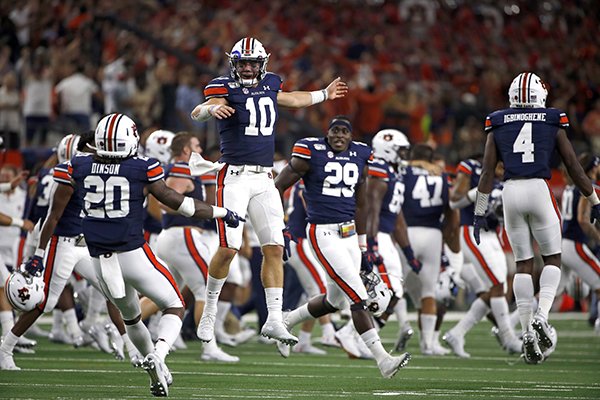 Nix barely converted a fourth-and-3 at midfield on the final drive when he tucked and ran. Only the nose of the ball was past the chain when officials measured. Then on third-and-10 from the Oregon 39 with no timeouts, Nix hit Williams for 13 yards, and then found him again on the next play to put Auburn ahead for the first time.

The Tigers, who trailed 21-6 late in the third quarter, delivered another opening-weekend blow to the Pac-12. They beat the Pac-12's highest-ranked team in a season opener for the second year in a row — No. 6 Washington lost to them 21-16 in Atlanta last year.

Nix finished 13-of-31 passing for 177 yards and two touchdowns, and also ran seven times for 42 yards. JaTarvious Whitlow ran 24 times for 110 yards for the Tigers.

Justin Herbert, who bypassed early entry in the NFL draft to return to Oregon, was 28-of-37 passing for 242 yards with a touchdown.

ATLANTA — Tua Tagovailoa threw for 336 yards and four touchdowns as No. 2 Alabama overcame a sluggish start to blow out Duke 42-3 Saturday in the Chick-fil-A Kickoff Game.

Returning to the stadium where they won the Southeastern Conference title last December and the national championship two seasons ago, the Crimson Tide (1-0) was held scoreless in the first quarter — which happened only one time in 2018.

But the Blue Devils (0-1) merely delayed the inevitable.

Tagovailoa put his tight ends to good use. The left-hander hooked up with Miller Forristall on a 27-yard touchdown pass and then went to Major Tennison for a 1-yard score

Alabama's dynamic receiving corps also got in on the fun. DeVonta Smith hauled in an 8-yard TD pass and Jerry Jeudy broke loose for a 21-yard score.

Jerome Ford and Brian Robinson Jr. ran for the Tide's other TDs.

NASHVILLE, Tenn. — Jake Fromm threw for 156 yards and a touchdown, and Georgia won its 20th opener in 23 seasons and stayed perfect to kick off coach Kirby Smart's fourth season.

The Bulldogs also easily won their 14th straight against the Southeastern Conference's Eastern Division in their first league game to open a season since 1995.

It sure didn't feel like a road trip with fans taking advantage of a holiday weekend to paint the stadium Georgia red. The Bulldogs rewarded them by scoring a touchdown on their first three possessions, giving the fans plenty to start celebrating early.

D'Andre Swift ran 16 times for 149 yards, and Brian Herrien added 65 and a TD run as the Bulldogs rolled up 326 yards rushing. Georgia finished with a 481-225 edge in total offense, and the Bulldogs also had two sacks and recovered a fumble.

Neal finished 15 of 25 for 85 yards before being replaced by Deuce Wallace for the final possession. Vaughn was held to 74 yards on 15 carries.

Vanderbilt managed only a pair of field goals by Ryley Guay of 26 and 46 yards.

BATON ROUGE, La. — Joe Burrow tied an LSU single-game record with five touchdown passes before halftime and the Tigers cruised to a win.

The Tigers (1-0) scored 21 points in the first quarter — something they never did in any quarter last season. Their point total was the most in a non-overtime game since scoring 63 against New Mexico State in 2014.

Burrow completed 23 of 27 passes for 278 yards without an interception before being subbed out after LSU's first possession of the second half, which ended with a field goal. That drive marked Burrow's last chance to break the LSU mark of five touchdowns in a game set by Zach Mettenberger in 2013.

LSU threw 39 times and ran 33, with more rushes coming in the second half as the Tigers ran down the clock. Ed Orgeron has said throughout August that he finally has the offense he wanted. Designed largely by new passing-game coordinator Joe Brady and overseen by incumbent offensive coordinator Steve Ensminger, the up-tempo, no-huddle scheme routinely features five receiving targets on a given play, some of whom give Burrow the option to unload the ball quickly if under pressure.

Georgia Southern (0-1), which won 10 games last season, was confronted with an LSU defense well prepared to stop its triple-option.

LARAMIE, Wyo. (AP) — Quarterback Sean Chambers rushed for 120 yards and a touchdown, Xazavian Valladay had 118 yards rushing and a score and Wyoming upset Missouri 37-31 in a season opener on Saturday night.

It was the second upset win on the day by a Mountain West Conference team against a Southeastern Conference member. Earlier Saturday, Boise State beat Florida State 36-31 in Tallahassee, Florida.

Chambers averaged 10 yards on each of his 12 rushing attempts. He also completed 6 of 16 passes for 92 yards for a Wyoming team that took advantage of three Missouri turnovers while giving up 537 yards to the Tigers.

Valladay averaged 7.9 yards on 15 carries as Wyoming ground out 297 yards on 42 carries as a team.

Missouri was led by Clemson transfer quarterback Kelly Bryant, who completed 31 of 48 passes for 423 yards and two touchdowns. However, Bryant threw a costly interception in the end zone and lost a fumble that was returned by Wyoming for another score.

Missouri entered the game favored by more than two touchdowns. The game began that way with the Tigers scoring on their first two possessions — a 3-yard TD pass from Bryant to Jonathan Nance and a 2-yard scoring run by Larry Rountree III — and dominating the Cowboys in total offensive yardage, 144-28 in the first quarter.

But Wyoming reversed its fortunes in the second quarter, outscoring the Tigers 27-3 in a scoring spree that included a 30-yard fumble return by cornerback C.J. Coldon, a 61-yard scoring run by Valladay and a 75-yard TD run by Chambers. The runs by Chambers and Valladay were the longest of their young college careers.

The Cowboys extended their lead to 34-17 entering the fourth quarter on a 1-yard run by Trey Smith.

KNOXVILLE, Tenn. — Dan Ellington threw two touchdown passes and ran for a third score as 26-point underdog Georgia State upset Tennessee 38-30 on Saturday in one of the first stunners of the college football season.

Georgia State (1-0) beat a Power Five opponent for the first time since this Sun Belt Conference school launched its program in 2010. The Panthers' closest call before this had come in 2016, when they lost 23-17 to Wisconsin after leading in the fourth quarter.

Tennessee (0-1) suffered one of the more embarrassing setbacks in its history, the latest blow for a storied program attempting to bounce back from two straight losing seasons.

Georgia State was coming off a 2-10 season in which it had lost its last seven games. Only one of those seven losses was decided by less than two touchdowns.

But the Panthers outplayed and outworked Tennessee on Saturday.

The hard times for Tennessee were evident from a look at the Neyland Stadium stands. Although the announced attendance was 85,503, thousands of fans apparently left at halftime and many others headed for shaded areas, leaving plenty of sections of the 102,455-seat facility virtually empty as Tennessee attempted its comeback.

Tra Barnett put Georgia State ahead for good 28-23 when he raced untouched around the right side with 8:56 remaining. Barnett ended up rushing for 95 yards on 21 carries.

Tennessee crossed midfield on its next possession before Evan Jones came in from Guarantano's blind side and sacked him, forcing a fumble that Georgia State's Jhi'Shawn Taylor recovered at the Vols' 39 with 7:10 left.

That led to the game-clinching touchdown by Ellington with 4:45 left.

Ellington faked a handoff and then made multiple moves to elude defenders before running into the left corner of the end zone for a 22-yard score that left Tennessee defensive backs Alontae Taylor and Shawn Shamburger lying on the field hurt as the Panthers celebrated in the end zone.

Brandon Wright made it 38-23 by kicking a 48-yard field goal with 2:37 left after a Guarantano interception. Guarantano ended up 26 of 40 for 311 yards with two touchdowns, including an 18-yarder to Jauan Jennings that capped the scoring with two seconds remaining.

A huge momentum swing early in the fourth quarter made it seem as though Tennessee would avoid the upset.

Georgia State led 21-20 and had the ball at Tennessee's 19-yard line when DeAndre Johnson sacked Ellington, forcing a fumble that LaTrell Bumphus recovered for the Vols.

On the next play, Guarantano found tight end Dominick Wood-Anderson wide open down the left sideline for a 54-yard gain. That completion set up a Brent Cimaglia 31-yard field goal that put Tennessee ahead 23-21 with 12:05 left.

That's the moment when the Panthers could have let the game get away from them. They instead regrouped and delivered the most memorable moment this program has ever produced.