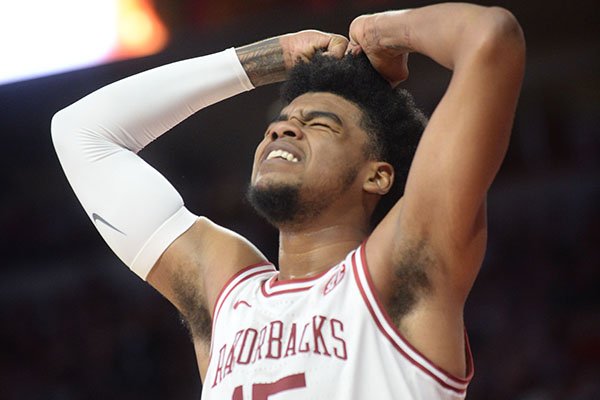 Arkansas guard Mason Jones reacts to a call during a game against Montana on Saturday, Nov. 16, 2019, in Fayetteville.

FAYETTEVILLE -- University of Arkansas junior guard Mason Jones missed his first game in two seasons with the Razorbacks when he sat out Saturday's 66-60 victory over Northern Kentucky.

Jones, who is averaging 18.5 points and 5.5 rebounds, didn't play because of a right shoulder injury.

"I'm not sure when he hurt it," Arkansas Coach Eric Musselman said. "Our trainer [Mark O'Neal] told me [Friday] that it was bothering him, and he didn't shoot around [Saturday].

"As far as I'm concerned, he's out indefinitely. And we'll prepare for our game Tuesday not to have him."

"It was a game-time decision for us," Arkansas senior guard Jimmy Whitt said of when Jones' teammates found out he wouldn't play Saturday. "He felt like he couldn't go.

Senior Jeantal Cylla, a graduate transfer, started in Jones' place, but he played just five minutes and didn't record any statistics. The Razorbacks went with a smaller lineup most of the game, with Jalen Harris playing 35 minutes off the bench.

[Video not showing up above? Click here to watch » https://www.youtube.com/watch?v=qnfS6qTvVZs]

A day after defensive end Jamario Bell played in his final football game for Arkansas, he was dressed out with the basketball team.

Bell, a 6-5, 250-pound senior from Junction City who started and had three tackles and a sack in Missouri's 24-14 victory over Arkansas in Little Rock on Friday, has joined the basketball team, Coach Eric Musselman announced before Saturday's game.

"Jamario just came up to the office. He told us he'd like to join us if there was a spot," Musselman said. "We need another guy in practice."

[Video not showing up above? Click here to watch » https://www.youtube.com/watch?v=EwzyG2ayedY]

Bell took part in Saturday morning's shoot-around and was dressed out for the game.

"Obviously, joining us this late, you don't know the role or anything," Musselman said. "But certainly we feel he can make our basketball team better."

"They kind of gave us an infusion of energy because they were so excited to play a different sport and one that they loved," Musselman said. "Certainly, with [Bell], he loves the game. Even at shoot-around, I thought he gave us a little extra juice because he was kind of pumped up to put on a basketball uniform."

[Video not showing up above? Click here to watch » https://www.youtube.com/watch?v=FpUP73URhM8]

Arkansas won the Collegiate Hoops Roadshow -- a multi-site, on-campus exempt event that allows teams to add an extra game to their schedule -- with victories over Montana, Texas Southern, South Dakota and Northern Kentucky.

Razorbacks senior guard Jimmy Whitt, who averaged 19.8 points and 8.3 rebounds in the four games, was voted the event's MVP.

Whitt, a graduate transfer from SMU who began his career at Arkansas, matched his career high in scoring with 24 points against Montana and Northern Kentucky. He also scored 24 points last season for SMU against Cincinnati.

Reggie Chaney, the Razorbacks' 6-8 sophomore forward, was setting up teammates like a point guard against Northern Kentucky.

He had a career-high five assists -- including one while he was lying on his back in the lane. After Chaney missed a shot and went to the floor, the rebound came to him, and he passed to Jimmy Whitt for a layup.

Northern Kentucky twice fouled shooters on three-point attempts within a 57-second span, and the Razorbacks made the Norse pay as Desi Sills and Isaiah Joe each made all three of their free throws to help Arkansas extend its lead to 55-43 with 8:49 left.

"We fouled one on a little floater in the lane from about 12 feet, which is the shot we wanted them to take all night," Horn said. "We challenged our guys before the game that if they can beat us making little 12-foot jump shots then God bless them, good game for Arkansas.

"But we fouled on one of those as well. There were a few plays like that we can clean up and get better at so, in some ways, that's a positive thing, but it didn't help us win the game."

Arkansas Coach Eric Musselman finally called his first timeout in seven games at the 17:29 mark of the first half after Northern Kentucky jumped out to an 8-2 lead.

"We just needed to step up our intensity level," Razorbacks guard Jimmy Whitt said. "They came out and punched us in the mouth first.

"They got it going before we could get going, and we haven't had many lapses like that in our seven games that we've played. So it was one of those times where [Musselman] felt like we needed [a timeout]. He felt like we needed a kick-start, and I think it helped us."

Northern Kentucky, which moved up to NCAA Division I status from Division II for the 2012-13 season, fell to 0-18 all-time against teams from the Atlantic Coast Conference, Big East, Big 12, Big Ten and SEC.

Saturday's game marked the sixth time the Norse have played within 10 points in their losses to the high-major teams.