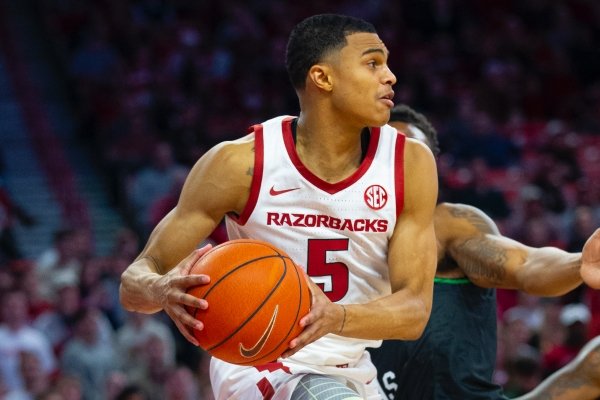 Arkansas guard Jalen Harris (5) looks to pass the ball against University of North Texas at Bud Walton Arena in Fayetteville on Tuesday, November 12, 2019.

FAYETTEVILLE — Jalen Harris, coming off a redshirt season after transferring from New Mexico, ran the show for Arkansas offensively during the 2018-19 season.

That role, for the most part, was handed over this season to grad transfer Jimmy Whitt, who committed to Razorbacks coach Eric Musselman in May as a graduate transfer from SMU.

Whitt has starred at point guard for Arkansas through seven games, averaging 14.3 points on 53.8 percent shooting and a team-best six rebounds per game.

Harris led the Razorbacks in minutes played last season at 30.8 per game, but he accepted a reserve role and is seeing the floor just over 22 minutes per game as a junior. Despite the decrease in run, Harris is tied for second on the team in assists with 15 and has knocked down four 3-pointers - half of his 2018-19 season total.

While each player features his own style and strengths, Harris and Whitt have been able to coexist for Musselman and help generate solid offense.

During their 191 offensive possessions together, the Razorbacks have scored at a 1.05 point-per-possession clip, turned the ball over at a solid 14.7 percent rate and shot 60.7 percent on 2-point field goal attempts, according to HoopLens analytics. Other offensive lineups are operating at .89 PPP (344 possessions).

“Just the way that basketball is evolving at the NBA level, at the collegiate level, with teams playing two point guards it obviously gives you more ball handlers on the floor so you can run your flow through two different guys," Musselman said. "If we’re not shooting great from the perimeter then those two guys give us great defense and, you know, just having an extra ball handler helps alleviate when anyone wants to pressure you as well.”

The caveats to this pairing are that Arkansas’ offensive rebounding and 3-point shooting, obviously, take a hit. The Razorbacks have shot 20.9 percent beyond the arc and grabbed only 22.2 percent of their misses when Whitt and Harris share the floor.

Lineups including the two guards, though, have been stellar defensively, allowing .73 points per trip over 191 possessions. Opponents have committed 50 turnovers and are shooting an abysmal 18.6 percent from 3-point range.

In Saturday’s win over Northern Kentucky, the Norse scored at a .67 clip against lineups with Whitt and Harris, and finished the game with a 34.8 percent effective field goal percentage.

Coach Darrin Horn's team shot 35 percent inside the arc in that span.

With leading scorer Mason Jones out with a shoulder injury, Harris was called upon by Musselman to play big minutes alongside Whitt in what turned out to be a competitive game. Harris logged a season-high 35 minutes and posted 5 points, 4 rebounds and 5 assists, tying a season high. Whitt scored a game-high 24 points and secured Collegiate Hoops Roadshow most valuable player honors.

Musselman, following the 66-60 win, was thrilled with Harris’ productivity. Arkansas turned the ball over only six times in his 48 offensive possessions, and his five dimes sparked the Razorbacks’ second-highest assist total of the season (18).

Harris changed the pace of play against the Norse, he added, and Arkansas was able to get easy scores in transition with him leading the break.

“Jalen has got really, really good speed with the ball, and he’s had an incredible attitude,” Musselman said. “You're talking about somebody who started last year, somebody who played a ton of minutes. If you look at what J5 (Harris) averaged last year minutes-wise, now his role has changed a little bit.

"We certainly feel like he’s a guy that can give us starter-quality play, it’s just that Jimmy has played at such a high level. Jimmy played great and it was good to get both of those guys on the floor together.”

Earlier in the season, Harris discussed the interesting dynamic at point guard. Being on the floor with Whitt makes everything easier for him, he said.

And teammates also know to run the floor when Harris begins racing the other way.

"It’s real fun knowing that I’m not the only one out there that’s going to create every time," said Harris, whose first 3-pointer of the season stemmed from a Whitt post up. "I can get some easy shots with him being able to post up smaller point guards and him kicking it out, and also with me pushing it and knowing I can find him."